The Young and the Restless Spoilers: Rey’s Love Admission Gets Sharon Acquitted – But No Future For Shey, Sharon Feels Betrayed

BY hellodrdavis on March 3, 2019 | Comments: one comment
Related : Soap Opera, Spoiler, Television, The Young and the Restless 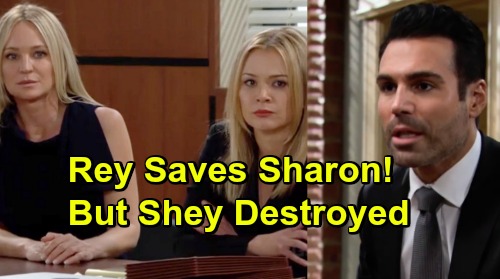 The Young and the Restless spoilers tease that the cover-up crew members will soon await their sentencing. Nikki Newman (Melody Thomas Scott), Victoria Newman (Amelia Heinle) and Sharon Newman (Sharon Case) will nervously await their fates. Things aren’t looking so great for the ladies right now, but one of them has a slightly brighter glimmer of hope than the others, and that’s Sharon.

Brittney Hodges (Lauren Woodland) has done her best to separate Sharon from Nikki and Victoria and to show the jury that Sharon was treated improperly during her “interrogation” by Rey Rosales (Jordi Vilasuso). His procedure in gaining Sharon’s trust, then springing an intense interrogation on her under the guise of unburdening her of her sins was highly improper, and Brittany hopes the jury will acquit Sharon as a result.

According to Y&R spoilers, Brittany will go after Rey hard on the stand. She’ll call him as her first witness and lay into him about how he played on Sharon’s emotions and wrangled a confession out of her after telling her he loved her. Rey will have to admit that he wasn’t with his wife, but with Sharon, on Valentine’s Day and that he truly does love Sharon. It will be a courtroom shocker for sure.

And there’s a good chance that the whole mess will spell acquittal for Sharon, at least of most serious charges. It’ll still be kind of a long shot, but stranger things have certainly happened. Of course, if Sharon is acquitted, then it will mean that Rey’s love saved her.

So, where will Rey and Sharon stand at the end of this whole mess? Suppose that Sharon does get acquitted and it’s all thanks to Rey’s admission on the stand. Is there any hope that the two of them will get together? Rey might think so. In fact, Y&R spoilers say that he’ll end his marriage to a presumably pregnant Mia Rosales (Noemi Gonzalez) after the trial, since he’s in love with Sharon.

But would Sharon even want Rey after the trial? Sure, she might be grateful that his testimony ultimately helped her, but chances are she’s going to be peeved with Rey for using her in the first place. Sharon is starting to realize, with Brittany’s help, that Rey insinuated his way into her life from the get-go, and that their whole friendship started out as a calculated plan.

If Shey ever do get together, chances are it’s going to take a while for Sharon to come around. Do you think that Sharon and Rey stand a chance going forward? Stay tuned to the CBS soap and don’t forget to check CDL often for the latest Young and the Restless spoilers, updates, and news.