BY Heather Hughes on July 31, 2019 | Comments: one comment
Related : Soap Opera, Spoiler, Television, The Young and the Restless 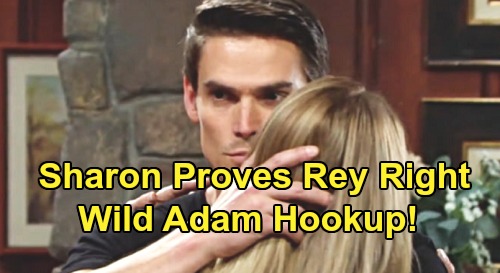 The Young and the Restless (Y&R) spoilers tease that Sharon Newman (Sharon Case) will have to make a choice – and it may not be an easy one. It’s clear that Sharon and Adam Newman (Mark Grossman) are dancing around their intense connection.

Sharon claims she feels pity for Adam and not love, but it’s obviously more than that. There’s certainly been some lust going on as well, so it’s high time Sharon stopped living in denial.

Y&R fans can expect some sparks in an upcoming conversation. Adam may point out that he ran into Rey Rosales (Jordi Vilasuso) and knows he came between them again. He might tell Sharon he’s sorry about that. Once Sharon confirms Rey’s done with her, The Young and the Restless spoilers say the mood between them should shift. There’ll be nothing stopping Sharon and Adam from taking the next step.

That brings us to Sharon’s choice. If she hooks up with Adam so soon, she’ll be proving Rey was right. Sharon will make it crystal clear that she was using Rey as some sort of protective romantic shield.

As long as Rey was in her life, Sharon could pretend she didn’t want Adam. Now that they’ve split, Sharon will struggle to deny how she really feels about her former flame. She’ll feel powerless to stop this.

Even so, moving past the point of temptation is indeed a choice. Sharon will be a single woman though, so there’s no reason why she shouldn’t do what she wants. Despite Adam’s dark side and all his mistakes, Sharon will decide to go for it during the week of August 5-9. She’ll cave in and hit the sheets with Adam, so it’s sure to be an extremely passionate reunion.

Shadam Fans Will Get A Full-Blown Sizzling Hot Love Scene

Y&R fans got a little taste of what a Sharon and Adam hookup might be like back when Adam had a fantasy dream. However, Adam woke up before it went very far. It sounds like this time Y&R will go for a full-blown sizzling love scene. The Young and the Restless spoilers say this could be some hot stuff if you like the chemistry between Adam and Sharon.

What’ll happen after Sharon and Adam rekindle things in the bedroom? Will their pull be impossible to resist at that point? Is dating again just around the corner?