The Young and the Restless Spoilers: Sharon Needs A New Man, ‘Shey’ Spark Gone – Should Y&R Ditch Reunion with Rey?

BY Heather Hughes on October 12, 2019 | Comments: one comment
Related : Soap Opera, Spoiler, Television, The Young and the Restless 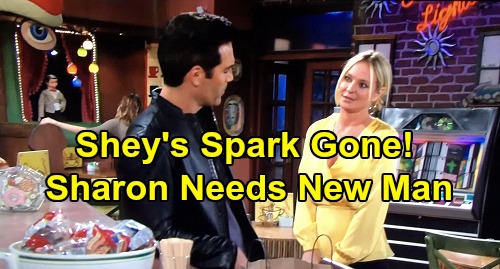 The Young and the Restless (Y&R) spoilers reveal that some fans are not feeling one couple’s reunion. Sharon Newman (Sharon Case) and Rey Rosales (Jordi Vilasuso) made real progress thanks to Lola Rosales’ (Sasha Calle) matchmaking efforts. Mariah Copeland (Camryn Grimes) has been fighting for “Shey’s” happiness, too.

It’ll take more work for Rey and Sharon to get back to where they were, but they’re well on their way. This reunion is happening, but is Y&R making the right call here? Some viewers feel like Sharon and Rey should’ve remained friends, and there are good reasons for that.

When Sharon and Rey’s romance first kicked off, it was fresh and exciting. Sharon also happened to be keeping a huge secret. She was involved in the cover-up of J.T. Hellstrom’s (Thad Luckinbill) death, which wasn’t a death after all. Even so, there was this steamy forbidden element going on. Sharon was falling for Rey despite her efforts to resist him, which made it fun.

It was soapy to have Sharon working with Rey – the lead detective on the case Sharon was caught up in. It was even soapier after Rey arrested the woman he adored. Once that part of the love story wrapped up, the spark was arguably gone. The buildup to “Shey” was far more satisfying than their actual relationship has been.

Even all the drama surrounding Adam Newman (Mark Grossman) felt kind of meh. Sharon was letting Adam manipulate her a bit, but Rey came across as controlling and overly critical. There wasn’t anything left to root for when it came to “Shey.” It still feels that way now that Sharon has cut Adam out of her life. Many Young and the Restless viewers just don’t think a Sharon and Rey reunion is worth pursuing.

On Twitter, fans have been chiming in with their thoughts on this couple. “I think they are just trying too hard for this Rey and Sharon pairing,” one Y&R watcher said. “They bore me. Rey and Abby seem a better fit.” Another viewer wondered, “Why on EARTH would the writers wanna put Sharon and Rey back together?”

Shey’s Chemistry Has Fizzled Along With Their Storyline

Although Rey and Sharon are attractive people with good hearts, the chemistry seemingly fizzled when their storyline did. This reunion feels forced – like the show just didn’t know what else to do with them, so they’re pairing them up again.

Of course, this could all be a setup for Sharon to cheat with Adam eventually. That’s something drama-loving fans could get behind. For now, Sharon and Rey’s reunion is shaping up to be a snoozefest. Sharon wanted a fresh start, but this is more like a reboot we don’t need. She might be better off with Adam, who could keep her on her toes, or even another hot love interest.

Are you hoping Adam swoops in and gets the girl sooner or later? Do you like Rey and Sharon together? Would you rather see them paired with other characters instead?