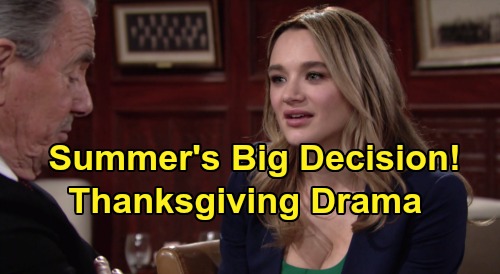 The Young and the Restless (Y&R) spoilers tease that Victor Newman (Eric Braeden) will feel like he has a lot to be grateful for. Y&R fans know the last several months brought some struggles for Victor. He was elated to find out Adam Newman (Mark Grossman) was alive and crushed when Adam reverted to his old troublesome behavior. That led to plenty of family clashing, including a nasty custody battle over Christian Newman (Alex Wilson).

Victor was also diagnosed with a rare blood disease, which Adam used against him. Vic even faked his death, which sparked more issues within the family and hurt people he cares about. However, things have settled down in Victor’s world lately – which is where his sense of gratitude comes in. Adam returned to town and is putting Connor Newman (Judah Mackey) first, so that’s a big win in Victor’s book.

Although Victor seems a bit bored in retirement, he knows the company’s in good hands with Victoria Newman (Amelia Heinle). The fact that Victor was willing to hand it over was another positive turning point. Victor’s health has also improved greatly, so there’ll be some good news to report at the family gathering this year.

Nikki Newman (Melody Thomas Scott) will be pleased that Victor’s alive and well – especially after having to pretend she lost him. It was a tough situation for all the Newmans, but it hit Summer Newman (Hunter King) the hardest. That’s because she was the only adult family member left out of the loop.

The Young and the Restless spoilers say Summer won’t show up to Thanksgiving dinner, which should leave Victor disheartened. He’ll wish he could truly make amends with Summer, but he’ll get his chance at little later. Summer will decide to come over for dessert, which could lead to a confrontation before peace is ultimately made.

Y&R viewers can expect this party to take a shocking turn, so that may be Summer’s arrival. It wouldn’t be a normal Newman get-together without some drama! Summer may need to get a few things off her chest. She might unload her frustration and share why it hurt so much for Victor to leave her out of the loop.

After Victor apologizes and pleads for forgiveness, Summer will agree to move forward. They’ll get their bond back on track, so that’ll warm Victor’s heart. Of course, Thanksgiving could be the calm before the storm. There’s bound to be more tension as Chelsea Lawson (Melissa Claire Egan) slips further away from Nick Newman (Joshua Morrow) and closer to Adam.