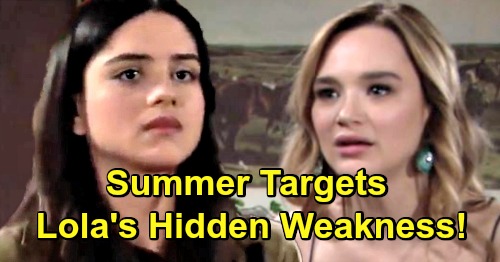 The Young and the Restless (Y&R) spoilers tease that Summer Abbott (Hunter King) won’t give up without a fight. Y&R fans know Summer’s been stuck in a love triangle with Kyle Abbott (Michael Mealor) and Lola Rosales (Sasha Calle). Honestly, no one’s behavior is looking great right now.

Kyle was the one who brought up the marriage idea in the first place. He also insisted there’d be no sex, which Summer agreed to. It’s safe to say Kyle emotionally manipulated Summer by making love to her and stringing her along. He can use whatever excuse he wants to justify it, but he was still cheating behind Summer’s back.

Then, there’s Lola who once wouldn’t accept a fancy purse, but was willing to lose her virginity to a married man. It didn’t go that far, but Lola was ready. To make matters worse, Kyle’s married to the woman who saved Lola’s life – even if Summer did it with leverage in mind.

Summer certainly isn’t blameless since she made it clear to Kyle that there would be consequences if he backed out of their wedding. She obviously meant she wouldn’t be handing over that life-saving liver. This has all turned into a huge mess for the three of them, but Summer will still believe she’s got a shot.

The Young and the Restless spoilers state that Summer will spend May sweeps plotting. Even if the annulment or divorce goes through, Summer won’t let Kyle go that easily. She doesn’t believe this bond between Kyle and Lola is as strong as they think it is. Summer will set out to prove it with some sneaky strategies soon enough. Maybe it’ll be her turn to do more emotional manipulating.

Summer will definitely take advantage of Lola’s chef gig in the coming weeks. She’ll realize Lola’s going to be stuck in Society’s kitchen all the time, so what’s lonely Kyle going to do? He’ll do Summer if she has anything to say about it! The Young and the Restless spoilers hint that Summer will hope to lure Kyle back into her bed and make herself number one in his heart.

Will Summer be able to turn things around? Will she make Lola the loser in this love triangle or drive Kyle even further away? We’ll give you updates as other Y&R news comes in. Stay tuned to the CBS soap and don’t forget to check CDL often for the latest Young and the Restless spoilers, updates, and news.