BY hellodrdavis on October 6, 2019 | Comments: one comment
Related : Soap Opera, Spoiler, Television, The Young and the Restless 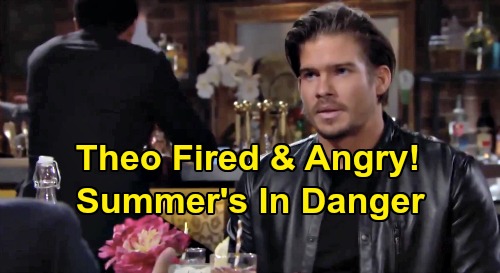 The Young and the Restless spoilers tease that Theo Vanderway (Tyler Johnson) will get an unpleasant surprise. As Y&R viewers know, he’s been working for Power Communications under Mariah Copeland (Camryn Grimes), and the situation has been contentious pretty much nonstop. Theo has worked to undermine Mariah, starting with an attempt to cajole Devon Hamilton (Bryton James) into giving him Mariah’s job as head of the company. Devon promptly squashed that idea, but Theo hasn’t given up in his quest to undermine Mariah.

In fact, Theo has done everything in his power to try to irritate and threaten Mariah – an attempt that hasn’t really worked to his liking. Fortunately for Mariah, she’s stood firm and been quite aware of his attempts to undermine her at Power Communications. And, as she told Devon, she found Theo to be a challenge. But then Theo made an unforgivable move and hit on Tessa Porter (Cait Fairbanks).

Of course, Tessa immediately reported the incident to Mariah, who was peeved and promptly confronted Theo about the incident. It was just too much, and Mariah subsequently threatened him with sexual harassment training and remediation. But it seems that Devon might soon get word of Theo’s attempt to hit on Tessa, because according to Y&R spoilers, Devon is going to fire Theo.

Now, whether Theo ends up doing something else to get himself fired, or whether it’s due solely to his decision to inappropriately pursue Tessa remains to be seen. But clearly something’s going to upset Devon, and that’s going to lead to the firing. Of course, Theo won’t be happy, and one wonders what he’ll do next. He seemed to really want to get a foothold in Genoa City, so he’ll probably be pretty upset by his firing.

But will he decide to act out even more than he already has? As Y&R viewers know, he’s caused a lot of problems for Kyle Abbott (Michael Mealor) since he came to town. He’s continually needled Kyle about his past bad-boy antics, and Kyle has experienced friction with Lola Abbott (Sasha Calle) as a result. For example, Kyle brought Zoe Hardisty (Anna Grace Barlow) to Kyle and Lola’s wedding, knowing that it would distress Kyle and potentially cause problems.

But could Theo lash out even more now that he has nothing to lose? Y&R spoilers say that Kyle will soon be particularly worried about Summer Newman (Hunter King) going forward, and that he’ll try to warn her again about Theo. Might Kyle sense that Theo will be in a particularly destructive way and want to protect Summer from what he might do? Kyle knows that Summer has recently been through a lot, and he’ll apparently think that Theo may not be a good source of comfort for her.

At any rate, it will be interesting to see how Theo acts in light of his firing. He seems to be pretty resourceful, so he should land on his feet ok, but he could try to lash out and get even with Devon and/or Mariah, and that could lead to trouble.

Do you think that Theo will become more dangerous in light of his firing? Stay tuned to the CBS soap and don’t forget to check CDL often for the latest Young and the Restless spoilers, updates, and news.