The Young and the Restless Spoilers: Thursday, May 30 – Operation Spy On Adam Begins, Rey Gets Orders – Victoria Fights for Her Future 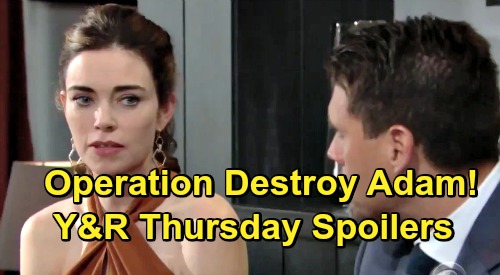 The Young and the Restless (Y&R) spoilers for Thursday, May 30, tease that Nick Newman (Joshua Morrow) will deliver orders to his new employee. He recently hired Rey Rosales (Jordi Vilasuso) as the head of security at Dark Horse, but he mainly wants him to keep tabs on Adam Newman (Mark Grossman). Nick will hope he can come up with dirt he can use against his devious brother.

Now that Adam’s determined to fight for Christian Newman (Jude and Ozzy McGuigen), Rey’s mission is critical. Nick will insist he’s counting on Rey to come through for him. If Adam’s up to anything suspicious, Nick will want to hear about it. Rey will keep his spying efforts simple at first, but new clues will lead him to widen the search eventually.

Adam’s past outside Genoa City holds some dark secrets, so Rey will work hard to uncover them in the weeks ahead. Elsewhere, Victoria Newman (Amelia Heinle) will refuse to back down. She hates the idea of Adam coming in an upstaging her at Newman Enterprises. Adam doesn’t value Newman or their family like Victoria does, so this is a huge slap in the face.

Victor Newman’s (Eric Braeden) attitude is sexist and archaic. Victoria stepped up when Victor needed her, and she did it while dealing with all the cover-up crew drama! She’s proven herself to her father time and time again, but he never seems to respect her role at the company. That’s why Victoria is ready to go up against the boys and show ‘em what she’s got.

Victor insisted Victoria has different strengths than Adam and that’s why he’d prefer Adam on the throne. He really meant Adam was more ruthless and could get things done, but Victoria can be plenty ruthless when she wants to be. The Young and the Restless spoilers say Victoria will plan some conniving moves and hope for the best. Even if Victoria fails, maybe she’ll go out in a blaze of glory.

Across town, Y&R fans can expect Lauren Baldwin (Tracey E. Bregman) to get tough. She’ll show no mercy during an upcoming confrontation, so this could tie in with Phyllis Summers’ (Gina Tognoni) scheme. On Wednesday, May 28, Phyllis assures Lauren that nothing shady is going on. Of course, Lauren knows better. She can tell Phyllis is cooking up some trouble, so Lauren may find out the details on Thursday.

Jabot is facing a threat from a company in China with an extremely similar logo, which Phyllis is behind. Once Lauren and Jack Abbott (Peter Bergman) compare notes, they should be certain Phyllis is responsible for this. How could they not be? This has vengeful Phyllis written all over it.