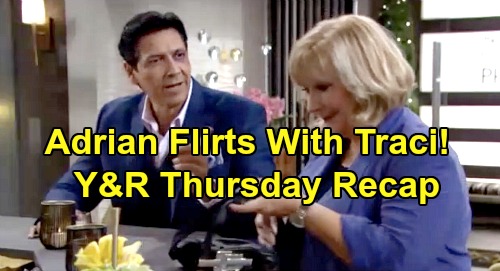 The Young and the Restless (Y&R) spoilers recap for Thursday, October 17, teases that Chelsea Newman (Melissa Claire Egan) will be desperate to help Connor Newman (Judah Mackey). She’ll urge Nick Newman (Joshua Morrow) to find Adam Newman (Mark Grossman), but Nick will wonder if Adam can really make a difference. Chelsea will feel like they have to try something since Connor’s so distraught. Nothing’s too risky if it gets Connor through his struggles.

Afterward, Nick and Chelsea will have another chat with Connor, who’ll admit another kid said something about his dad. That started Connor’s fight at school. Y&R spoilers say Nick will make a speech about being the bigger man and learning to walk away.

Once Connor snatches Chelsea’s phone, he’ll dial Adam’s number and get voicemail. Connor will be upset once again, but things will take a positive turn soon after. He’ll play superhero charades with Christian Newman (Alex Wilson) and seem in better spirits. Nick will feel confident they can all get through this together.

At Kyle Abbott (Michael Mealor) and Lola Abbott’s (Sasha Calle) apartment, they’ll admit to dreaming about babies last night. One was screaming in Kyle’s nightmare, but Lola will note that she dreamed of triplets. Once their laughter dies down, Kyle will pick up on Lola’s disappointment. He’ll ask if Lola wishes she were carrying their baby, but she’ll insist she doesn’t want to get pregnant right now.

After Lola promises to rest at home, Kyle will head to the Abbott mansion. The Young and the Restless spoilers say a man wearing sunglasses will look at a pic of Kyle on his cell. He’ll spot Kyle leaving and take that as his cue to approach the apartment. Lola will assume Kyle forgot his keys, so she’ll let in the person who buzzes. She’ll be taken aback to find Adrian Rosales (Jay Montalvo) on the other side of the door.

Once Lola lets her father in, he’ll take off his shades and reveal a shiner. Lola will assume this has something to do with a woman. Adrian will protest that he didn’t know she was married. He’ll confess that her husband’s after him, but Lola won’t care. She’ll wish Adrian luck and tell him goodbye.

In the Abbott home, Jack Abbott (Peter Bergman) and Traci Abbott (Beth Maitland) will discuss the mystery surrounding Stuart Brooks. Since Stuart had daughters, Traci will hope at least one of them can provide more info. Leslie Brooks will get in touch with Traci and mention a letter Dina Mergeron (Marla Adams) wrote to Stuart.

Next, Kyle will show up and get grilled about the name. He won’t remember Dina talking about Stuart, but he’ll express excitement over their family project. Kyle will ask how Jack would feel about becoming a grandfather, but he’ll just be teasing Jack a bit. He’ll assure his dad it was a false alarm before grabbing some crackers for Lola out of the kitchen.

After Leslie emails the letter Dina wrote, Traci and Jack will mull it over. They’ll be baffled by the Shakespeare quote and notice there are smudges. Jack and Traci will determine that Dina must’ve been crying when she wrote it.

Back at “Kola’s” apartment, Kyle will arrive to find Adrian sharing his woes with Lola. She’ll insist her father’s going to ask for money, but she’ll want Kyle to refuse. Adrian will point out that he nowhere to stay. As Lola gets sick and dashes off to the bathroom, she’ll push Kyle to get rid of Adrian.

Once they’re alone, Adrian will keep trying to pry money out of Kyle. He’ll note that if something happened to him, Lola would take it the hardest. Kyle will whip out his checkbook and write one, but he’ll also pass along a warning. He’ll make it clear that Adrian had better not hurt Lola again.

Lola will emerge from the bathroom eventually, so Kyle will get her to open up. The Young and the Restless spoilers say Lola will confess her concerns about Adrian. She’ll suggest that they’ll go in when it’s time for them to be parents, and Kyle will back her up on that.

At the Grand Phoenix, Adrian will flirt with Traci. She’ll mention Adrian’s black eye, but he’ll want to talk about her being a best-selling author. They’ll ultimately enjoy a toast at the bar, so a risky love story could be brewing! We’ll give you updates as other Y&R news comes in. Stay tuned to the CBS soap and don’t forget to check CDL often for the latest Young and the Restless spoilers, updates and news.