The Young and the Restless Spoilers: Traci Longs For Cane – Would Trane Make A Good Couple?

BY hellodrdavis on May 20, 2019 | Comments: one comment
Related : Soap Opera, Spoiler, Television, The Young and the Restless 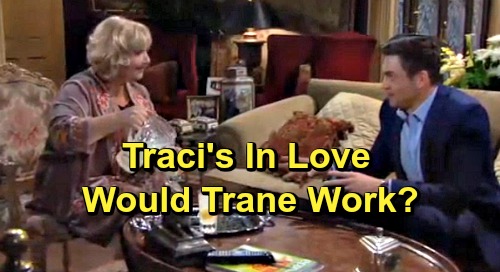 The Young and the Restless spoilers tease that Traci Abbott (Beth Maitland) has a new mission. She’s been delighting Y&R viewers as she’s been working on her new novel, which is set in the 1940s and includes a cast of characters based on Cane Ashby (Daniel Goddard), Lily Ashby (Christel Khalil), and herself. We’ve seen black-and-white sequences featuring Traci’s characters and an intriguing storyline of romance and mystery.

But recently, it was revealed that there’s something else going on with Traci – she seems to have developed a little crush on Cane. As Y&R viewers know, Traci has been Cane’s friend and confidant as he’s been dealing with the loss of his marriage to Lily. Cane has really leaned on Traci, and she’s been there for him every step of the way.

And now, Cane has become Traci’s muse for her writing. Traci has gushed about her new novel, and it’s clear that she’s enjoying the work and the subject matter. In fact, Lauren Baldwin (Tracey Bregman) even observed recently that Traci was glowing as she talked about the novel, almost as if she was in love.

So, we can’t help but wonder whether Traci is developing more than just a crush on Cane. She pictured Cane shirtless at one point, which is certainly the sign of a crush, but could there be more developing between “Trane?” And would these two characters make a good couple?

Well, it seems that Cane could certainly use someone with a lot of common sense who could ground him, and that certainly would describe Traci. She’s grounded and sincere, and she’s also a no-nonsense person who would call him out when he’s struggling with issues or whatnot.

Plus, Cane and Traci are good friends right now, and that’s a great way to start a relationship. Their friendship could blossom from here. Of course, right now the crush is one-sided on Traci’s part, but Cane could come to realize how much he cares about Traci over time.

Cane already seems to think about Traci when she’s not around. He cutely visited her to offer some suggestions for her novel, so clearly he was thinking about her project and wanted to help make it better. The signs are certainly there for a possible future romance – but it will probably take Cane a while to come around.

After all, Cane is still reeling over the loss of his marriage to Lily, and he probably will be for a while. It will probably take some time for him to even be ready for a new relationship, but we think that his feelings for Traci could sneak up on him. Perhaps he’ll suddenly realize that happiness is staring him in the face every day in the form of Traci.

What do you think? Would you like to see Traci and Cane try things out as a couple? Stay tuned to the CBS soap and don’t forget to check CDL often for the latest Young and the Restless spoilers, updates, and news.