The Young and the Restless Spoilers: Tuesday, August 27 Review – Nick Gets Custody of Christian While Adam Bonds With Connor

BY hellodrdavis on August 27, 2019 | Comments: one comment
Related : Soap Opera, Spoiler, Television, The Young and the Restless 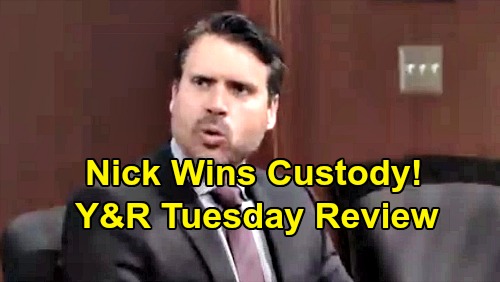 The Young and the Restless spoilers review for Tuesday, August 27, tease that Nick Newman (Joshua Morrow) will be anxious to get to court for the new hearing regarding Christian Newman’s (Alex Wilson) custody, precipitated by Adam Newman’s (Mark Grossman) petition to drop the case. He’ll want to get the matter settled and get Christian back home, but Adam will be a no-show at the hearing.

As it turns out, Chelsea Lawson (Melissa Clare Egan) will find Adam at Crimson Lights and urge him to go to the hearing and help the process along so that Christian can go home to Nick. Adam will insist that he’s not going and that he’s already done his part by filing the petition, and Chelsea will eventually realize that Adam’s not going because it would be too difficult for him emotionally. Adam will insist that she’s wrong and that the Newmans were right; Christian was just a means to an end for him.

Meanwhile, at the courthouse, the judge will be irked by Adam’s no-show and will insist that all parties need to be present for the hearing. Nick’s lawyer Brittany Hodges (Lauren Woodland) will try to get the judge to go ahead with the hearing, but the judge will insist on talking to Adam to make sure he wasn’t coerced into filing his petition. A big argument will ensue between the judge, Brittany, Nick, and Summer Newman (Hunter King), who will be present as a character witness for Nick.

Finally, Nick will insist on being heard by the judge, and he’ll proceed to make a big emotional pitch to regain custody of Christian. Nick will say that he’s there to speak for Christian since Christian can’t speak for himself, and that he’s been living a nightmare not having his boy at home where he belongs. He’ll nearly go too far and say that keeping him from Christian is wrong and cruel, which the judge will caution him about, and he’ll finish by begging the judge to let Christian come home.

Ultimately, the judge will rule in Nick’s favor, and Nick will get to break the great news to Christian as he’s enjoying a snack with his babysitter at Crimson Lights. Nick, in tears, will embrace Christian and tell him that he’s going to come home for good. Christian will be thrilled.

Meanwhile, in Chancellor Park, Chelsea and Connor Newman (Judah Mackey) will be hanging out when Adam comes along. Connor will be overjoyed to see his dad, and he’ll want Adam to stay, which Chelsea will readily agree to. While Connor runs to the car to get his video game, Adam will thank Chelsea for letting him spend time with his son. Chelsea will say that she knows how much losing Christian has cost him, and that she believes there is still good in him.

Chelsea will give Adam something she’s been holding onto – his mother’s initialed handkerchief. She’ll say that she was holding onto it for Connor, but now that Adam’s back, he should have it. Adam will be genuinely touched, and he and Chelsea will tenderly embrace as Connor returns with the video game. Adam and Chelsea will then watch as Connor enjoys his game, but they won’t notice a gum-chewing Billy Abbott (Jason Thompson) watching them menacingly.

Next, on the new episode of Y&R on Tuesday, August 27, Theo Vanderway (Tyler Johnson) will find Mariah Copeland (Camryn Grimes) at Society. He’ll ask her for a do-over, and he’ll hope they can find a way to work together. She’ll agree to hear his ideas, and he’ll proceed to explain that he knows some up-and-coming influencers that they could take on as clients together. She’ll agree to give it a try with two of his influencers, and he’ll scramble to get them to her asap.

Later, Theo will bring the influencers to Mariah, who will disarm them by joking that Theo is using them and that they should get out while they can. Theo will laugh the whole thing off and suggest they talk business over shots. Mariah will order a bottle of tequila, and they’ll down a few shots while they pitch their services to the influencers. Ultimately, the influencers will have to think about it, and Theo and Mariah will toast (with a shot) to their good meeting.

Just then, Summer and Tessa Porter (Cait Fairbanks) will arrive and be shocked to see Theo and Mariah downing a shot. Theo will leave with Summer, and Tessa will tell Mariah that she was surprised to see her acting like BFFs with Theo. Mariah will say that she’s got Theo right where she wants him, while outside the restaurant Theo will tell Summer the exact same thing about Mariah.

Clearly, both Mariah and Theo think they’ve got one up on the other, but what if they ultimately make a good team? Their experiment to work together just might turn into something wonderful and their collaboration could explode into a successful business opportunity for them both…that is, unless Theo really is out to sabotage Mariah. So far, he hasn’t proven to be trustworthy, so you never know what he’s got up his sleeve.