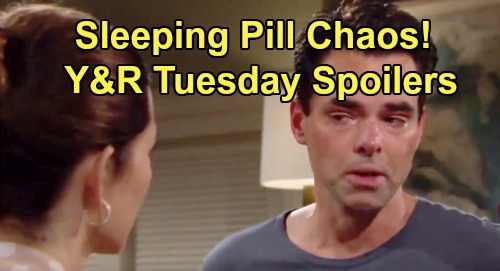 The Young and the Restless (Y&R) spoilers for Tuesday, July 30, tease that Billy Abbott (Jason Thompson) will feel like he’s losing his grip on reality. He’ll do his best to hide his growing anxiety from Victoria Newman (Amelia Heinle), but she may sense that he’s headed for trouble. Nevertheless, Billy will try to play it cool and stay in control. He’ll hope a sleeping pill might help him get a decent night’s rest for once.

Unfortunately, Billy will end up having his wildest night since Adam Newman’s (Mark Grossman) return. Despite going to bed at home with Victoria, Billy will wake up on the floor of the Chancellor mansion with no clue how he got there. He’ll make his way back to the peeling wallpaper and find another message: STOP ADAM.

Y&R spoilers say Billy will suspect Delia Abbott (Sophie Pollono) wants him to go after Adam, which is clearly crazy. Delia was a sweet little girl, and she wouldn’t blame Adam for an accident. Billy acts like this was coldblooded murder, but Adam didn’t even know he’d hit Delia at first. The cover-up obviously wasn’t a good idea, but there’s no reason to blame Adam for the accident itself.

Later, Billy will make an emotional admission to Victoria, who’ll be deeply concerned about her almost husband. He’ll be scared he’s going to lose it and won’t know what to do. While Victoria tries to help Billy cope, Victor Newman (Eric Braeden) will make a tough choice. Will it have something to do with his treatment or perhaps more Adam drama?

Whatever the case, Victor will mull over his options before he makes the final call. After a decision is made, Victor will prepare to make a bold move and let Nikki Newman (Melody Thomas Scott) in the loop eventually. Over with Chelsea Newman (Melissa Claire Egan), she should learn the details behind Daryl Tulane (Gordon Thomson) trip to Genoa City. He shows up in town on Monday and insists he’s going to make Chelsea rich.

However, Daryl is a tricky character with a history of scamming. The Young and the Restless spoilers say Chelsea will have to be careful here. Next, Kyle Abbott (Michael Mealor) and Lola Rosales (Sasha Calle) will do a little more wedding planning. As they inch closer to their big day, Theo Vanderway (Tyler Johnson) will make some serious waves for his ex-friend.

Kyle will warn Theo not to hold what happened in New York over his head, but Theo will stir the pot anyway. The Young and the Restless spoilers say the secret will remain under wraps, but for how long? This shocker seems destined to explode right before Lola and Kyle tie the knot.

It sounds like some bombshells are brewing in GC. We’ll give you updates as other Y&R news comes in. Stay tuned to the CBS soap and don’t forget to check CDL often for the latest Young and the Restless spoilers, updates and news.