The Young and the Restless Spoilers: Vengeful Lola Sleeps with Theo After Kyle’s Secret Blows Up – Big Blunder Sinks Kola?

BY Heather Hughes on October 9, 2019 | Comments: one comment
Related : Soap Opera, Spoiler, Television, The Young and the Restless 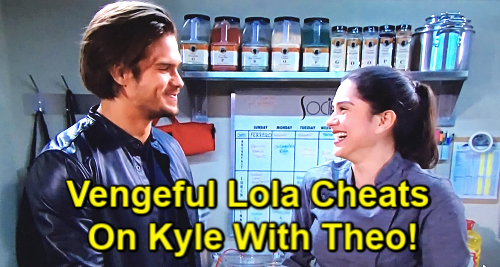 The Young and the Restless (Y&R) spoilers tease that Lola Abbott (Sasha Calle) may hold Theo Vanderway (Tyler Johnson) to a promise. Y&R fans know Theo’s a real scaredy-cat when it comes to blood, so he asked Lola to stay tight-lipped about that. She initially insisted she didn’t like secrets, but she caved after Theo suggested she might need him to keep one eventually.

Lola doesn’t think she’ll need Theo to hold up his end of the bargain, but things could change down the road. It’s clear that some writing shifts are happening, and one of them seems to be a push toward Kyle Abbott (Michael Mealor) and Summer Newman’s (Hunter King) romance. Those two have been bonding like crazy while Theo’s sharing more and more scenes with Lola.

Now let’s consider this big secret Kyle’s keeping. Is it really THAT bad? At this point, it’ll be a giant letdown and way too predictable if that’s what breaks up Kyle and Lola. Kyle made sure plastered Zoe Hardisty (Anna Grace Barlow) got to the hospital and paid off her father. He didn’t murder someone in cold blood.

If Lola had been more understanding about Kyle’s history of partying, he would’ve come clean already. Kyle’s just terrified of losing Lola, and that’s leading him down a risky path.

However, it could be Lola who makes the biggest blunder. When she’s upset and angry, Lola tends to make impulsive decisions – like when she kissed Fenmore “Fen” Baldwin (Zach Tinker) last New Year’s Eve to make Kyle jealous.

Lola made that move after Kyle bought her an overpriced handbag. Just imagine what she’ll do after she learns he married her with a secret hanging over them. Could Lola land in Theo’s bed?

Lola Rosales Cheating On Kyle Newman Would Be Interesting Twist

It might be an impulsive moment of revenge that Lola regrets the morning after, but the damage would be done. That would give Lola an even bigger secret and leave her scrambling to keep Theo quiet.

If Kyle pushes Theo too far, the truth about this potential hookup could easily come out. The Young and the Restless spoilers say trouble’s indeed headed for “Kola,” so having Lola cheat on Kyle would be an interesting twist. Y&R viewers will be anxious to see how long Lola and Kyle’s marriage can survive.

Will Kyle leave Lola for betraying him with his former friend? Will he reunite with Summer if Lola strikes this vengeful blow? It sounds like the tables could turn soon enough! We’ll give you updates as other Young and the Restless news comes in. Stick with the CBS soap and don’t forget to check CDL often for the latest Young and the Restless spoilers, updates and news.