The Young and the Restless Spoilers: Wednesday, April 24 Recap – Neil’s Cause of Death Revealed – Ashley and Jack’s Truce

BY Heather Hughes on April 23, 2019 | Comments: one comment
Related : Soap Opera, Spoiler, Television, The Young and the Restless 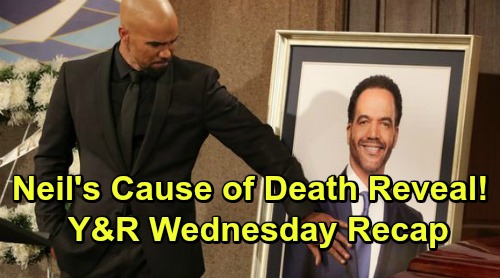 Nikki will certainly be distraught over Neil’s sudden demise. She’ll point out that Neil understood her struggles and may be the reason she’s still alive. Victor will reflect on this huge loss and how grateful he was for Neil. They’ll have a hard time wrapping their heads around the fact that Neil’s gone.

At Devon Hamilton’s (Bryton James) penthouse, he’ll support an emotional Lily Ashby (Christel Khalil) as they cope with the blow. Mattie Ashby (Lexie Stevenson) and Charlie Ashby (Noah Alexander Gerry) will also be shaken up over all this. Neil’s death will bring some questions, so Dr. Nate Hastings (Sean Dominic) will provide as many answers as he can.

Lily will initially rant at Nate and argue that there must’ve been warning signs. However, Devon will get her to settle down and listen to the doc. Y&R spoilers reveal that Neil died in bed, so Nate will suggest he probably went peacefully. He’ll admit it looks like a massive stroke killed Neil in his sleep.

Next, Devon will bring up funeral arrangements and a packet Neil left behind. He had instructions in case something ever happened to him, so Cane Ashby (Daniel Goddard) will take the lead on handling it. Unfortunately, Lily will begin to spiral as she battles guilt. She’ll blame herself for killing both Hilary Hamilton (Mishael Morgan) and Neil since she brought stress to her father’s life.

After Lily rushes out the door, Cane will chase after her. He’ll catch Lily at Crimson Lights, where she’ll break down in his arms. Mariah Copeland (Camryn Grimes) and Tessa Porter (Cait Fairbanks) will also discuss Neil’s death at the coffeehouse on Wednesday. Later, Mariah will drop by to give Devon a hug and assure him she’ll figure out some form of a goodbye on GC Buzz.

Once Devon’s alone, he’ll imagine Neil’s standing there with him and get all choked up. Devon will wonder aloud why Neil had to leave them as he cries on the staircase. At the Abbott mansion, Neil’s demise will hit Ashley hard. She’ll confess to Jack that she feels bad about not staying in touch. Ashley just always expected Neil to be there, but now she’s lost a good friend forever.

As Jack consoles Ashley, The Young and the Restless spoilers say talk will turn to Neil’s half-brother. Ash will argue that there was nothing half about Neil and Malcolm Winters’ (Shemar Moore) relationship. Jack and Ashley will be reminded of the importance of family, so they’ll call a truce and hold each other tight.

On fire escape of their apartment building, Tessa will sing to a weepy Mariah while a montage plays of grieving Genoa City residents. The Young and the Restless spoilers say this will definitely be a tough day in GC. We’ll give you updates as other Y&R details emerge. Stay tuned to the CBS soap and don’t forget to check CDL often for the latest Young and the Restless spoilers, updates and news.