BY hellodrdavis on December 24, 2019 | Comments: 2 comments
Related : Soap Opera, Spoiler, Television, The Young and the Restless 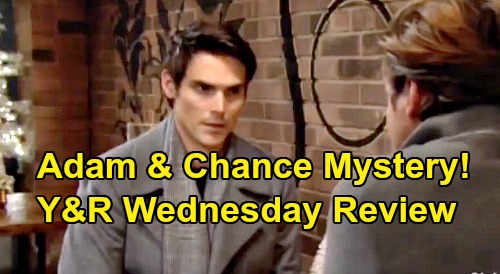 The Young and the Restless spoilers review for Wednesday, December 25, tease that Phyllis Summers (Michelle Stafford) will reconnect with Amanda Sinclair (Mishael Morgan) at the Grand Phoenix. Amanda will take the opportunity to apologize for her words when she refused Phyllis’ request for representation after her firing. Phyllis will graciously accept her apology and will suggest that they be friends. Amanda will be receptive, and Phyllis will be glad to hear that she’s thinking of staying in Genoa City.

Phyllis will then head to Society, where she’ll notice Adam Newman (Mark Grossman) and Chance Chancellor (Donny Boaz) talking. They’ll be in the midst of a conversation in which Chance has just informed Adam that he’s staying in Genoa City. Adam won’t be happy about that decision, and Chance will insist that while he’s a reminder of things they’d both rather forget, he’s not staying to make things harder on Adam.

Phyllis will hide nearby while Chance tells Adam that he won’t forget how Adam helped him out of a jam in Vegas. Adam will then say that perhaps it will be good to have him in town, since he’s one person who isn’t trying to take him down. At that point, Phyllis will knock over a glass and the men will see her. Adam will get miffed and leave, and Phyllis will take the opportunity to needle Chance about his association with Adam.

Phyllis will buy Chance a drink, and Chance will note that he knows she wants dirt on Adam to get back at him, and he’ll say that he’s not telling her anything. Phyllis will try to persuade him to stay for another drink, but Chance will say he’s not interested and that she should go toy with someone else.

Home at his penthouse, Adam will call someone and ask how the weather is there, then whether “she” is still getting her payments. He’ll say they need to keep it that way, as silence is expensive but essential. Clearly, Chance and Adam’s secret is dependent on someone else keeping quiet…someone that Phyllis would certainly love to talk to.

Meanwhile, on the new episode of Y&R on Wednesday, December 25, Nate Hastings (Sean Dominic) will see Amanda in the Grand Phoenix lobby, and they’ll talk over a game of backgammon. They’ll touch briefly on the animosity that Devon Hamilton (Bryton James) and Elena Dawson (Brytni Sarpy) have for Amanda, but Nate will say that he’s keeping his family and his friends separate.

The two will talk about the Christmas season, and it will come out that Amanda has made some friends, but she’ll play coy about who she’s friends with. She’ll allude to her burgeoning friendship with Phyllis, which will prompt Nate to tell her to be careful. Nate will then ask about gentlemen friends, and Amanda will only say that she’s not a hermit. She specifically won’t mention her friendship/flirtation with Billy Abbott (Jason Thompson).

Finally, Sharon Newman (Sharon Case) will be thrilled when Faith Newman (Alyvia Alyn Lind) returns home from boarding school. Mariah Copeland (Camryn Grimes) and Summer Newman (Hunter King) will be on hand at Crimson Lights for Faith’s big homecoming, as will Rey Rosales (Jordi Vilasuso). Sharon will feel like the luckiest mom in the world.

Mariah and Summer will quickly realize that Faith is interested in a boy at boarding school, so they’ll take her to the patio and grill her for details. She’ll ask for advice from her big sisters and they’ll all gush about how happy they are to be together for the holidays. When Faith steps away, Mariah will wonder how things are going at Jabot, and Summer will take the opportunity to tell Mariah that she’s matured and moved on from Kyle Abbott (Michael Mealor).