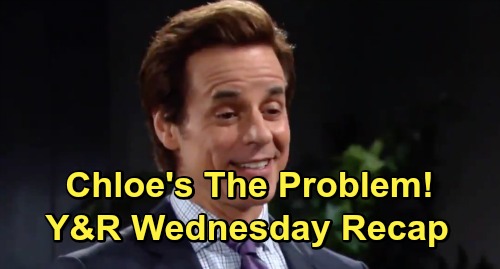 The Young and the Restless (Y&R) spoilers update and recap for Wednesday, June 19, tease that Nate Hastings (Sean Dominic) won’t have any positive updates to pass along. After a quick exam, he’ll determine that there’s been no change in Victor Newman’s (Eric Braeden) condition. Nevertheless, Nate will think it’s great that Victor’s staying upbeat. Victor will just hope that his health can bring his children together.

Nikki Newman (Melody Thomas Scott) will mention the custody battle to Victor and point out what Nick Newman (Joshua Morrow) must be wondering. Whose side will Victor take? Victor will think the choice is clear since Nick is the only dad Christian Newman (Jude and Ozzy McGuigen) has ever known. Nikki will contend that Victor should reach out to Nick and let him know he’s got his back.

At Dark Horse, Michael Baldwin (Christian LeBlanc) will drop by to deliver a warning. He’ll argue that Adam Newman (Mark Grossman) won’t be using Kevin Fisher (Greg Rikaart) to do his dirty work. Adam won’t see how Michael can stop him. After all, Michael can’t exactly claim Adam kidnapped a dead woman.

Adam will hint that if Michael speaks out about Chloe Mitchell (Elizabeth Hendrickson) and this whole mess, it could tank his career. Michael will fire back that his mind can be just as dark and twisted as Adam’s if need be. He’ll imply that Adam doesn’t want to find out what he might do.

However, Adam will stand his ground and expect Kevin to follow orders. Before Michael exits, he’ll suggest that Adam shouldn’t say he didn’t warn him. At Society, Traci Abbott (Beth Maitland) will want the scoop on Cane Ashby’s (Daniel Goddard) relocation plan. He’ll admit he has to receive word from Lily Ashby (Christel Khalil) before he makes that decision.

The Young and the Restless spoilers state that Lily will call with bad news soon after. She’ll reveal that she won’t be attending Society’s stage dedication for Neil Winters (Kristoff St. John). Lily will note that her first class is graduating, so she won’t want to miss that. She’ll abruptly wrap up the call, which will leave Cane distraught.

Back with Traci, she’ll head home to work on her book until the doorbell rings. She’ll open it to find Cane, who’ll confess that he needs her. Cane will wonder if Traci would be willing to attend Neil’s dedication with him, so she’ll accept the offer to be his date.

Over with Abby Newman (Melissa Ordway), she’ll lash out at Nate for keeping her in the dark on Victor’s health. However, Nate will point out that Abby’s smart. She knows all about doctor-patient confidentiality and can understand that deep down. Abby will offer an apology before she discusses her fears. She won’t want to lose the only parent she has left in town.

Nate will suggest he can relate to that before Abby agrees to attend the dedication with him. At the coffeehouse, Paul Williams (Doug Davidson) will speak with Nikki and take some digs regarding Victor’s lawsuit. When he suggests Victor should go down for the count, it’ll strike a nerve with Nikki and send her stomping off.

Paul will eventually track Nikki down and pry a confession out of her. She’ll get choked up as she makes Paul promise to keep this a secret. Nikki will come clean about Victor’s life-threatening illness and how terrifying it is. Y&R spoilers say Paul will show Nikki some love and suggest she shouldn’t focus on what she stands to lose.

At the tack house, Victor will march over to confront Adam. He’ll push his son to drop the custody case, but Adam will remind Victor that he once went after Christian. They’ll get into a heated argument, which will lead Victor to snap that he should’ve left Adam in Vegas. Since his son likes being an outsider so much, Victor will boom that Adam should get off his property!

The Young and the Restless spoilers say Victor will feel like Adam’s tossing out his second chance. It sounds like things will remain complicated within the Newman clan. We’ll keep you posted as other Y&R details emerge. Stay tuned to the CBS soap and don’t forget to check CDL often for the latest Young and the Restless spoilers, updates and news.