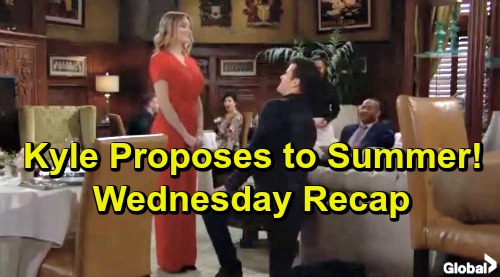 The Young and the Restless (Y&R) spoilers update and recap for Wednesday, March 6, tease that Summer Newman (Hunter King) will be taken aback by Kyle Abbott’s (Michael Mealor) recent marriage proposal. He’ll reiterate that he’ll do anything to save Lola Rosales’ (Sasha Calle) life. Summer will suggest this sounds like too much of a transaction for her. As a result, she’ll refuse to donate part of her liver to help Lola.

Kyle will push Summer to reconsider, so she’ll get him to admit things weren’t always so rosy with Lola. Summer will also score a confession about the cabin kiss. Kyle will come clean about reciprocating, so Summer will decide she can live with him not being all in on their marriage. She’ll feel confident she can change Kyle’s mind sooner or later.

Y&R spoilers say Summer will suggest an agreement. She’ll think they should give their marriage a year to see if they can make it work. If both of them aren’t happy by the end of it, Summer will grant Kyle a divorce. He’ll be OK with that as long as he doesn’t have to perform his husbandly duties.

Summer will have one more condition as part of this deal. She won’t want anyone to find out she’s Lola’s donor. Summer would rather have the world think Kyle just found his way back to her, so he’ll agree to that. However, Kyle will want to break the news to Lola himself.

Once everything’s squared away, Kyle will urge Summer to come back to the hospital with him and get prepped for surgery. She’ll make him drop to one knee and officially propose first, so it’s clear Kyle’s in for a rough time! Speaking of rough times, Tessa Porter (Cait Fairbanks) will face some in court. The cover-up crew won’t be in good shape either by the end of all this.

The Young and the Restless spoilers say Michael Baldwin (Christian LeBlanc) will move forward with a terrible strategy. He’ll put Tessa on the stand and get her to admit the blackmail. Then, Michael will shift gears and argue that maybe Tessa killed J.T. Hellstrom (Thad Luckinbill) herself or at least worked with him. Christine Williams (Lauralee Bell) will request a recess to get a grip on Michael’s new info.

At Jabot, Phyllis Summers (Gina Tognoni) will open up to Kerry Johnson (Alice Hunter). She’ll insist that Kerry’s the only person she can rely on now. After Phyllis describes her efforts to help the others, Kerry will understand. Nevertheless, she’ll point out that Jack Abbott (Peter Bergman) is worried about the direction of the company.

Phyllis will hint that she’s got a way to handle the crisis, but she’ll want to make sure Kerry’s loyal. She’ll hope that Kerry and Jack’s relationship won’t be an issue. Next, Christine Williams (Lauralee Bell) will interrupt seeking Tessa updates. Kerry will step out so Phyllis can fill Christine in on some details.

Afterward, Phyllis and Kerry will discuss plans for a new line of products. They’ll shake hands to seal the deal on the “Phyllis and Kerry era.” Back in court, Christine will be armed with plenty of ammunition. She’ll get Tessa to talk about how Victoria Newman (Amelia Heinle) set a camera up inside her home and broke in to retrieve the footage.

Tessa will also admit Victoria threatened to pin J.T.’s murder on her, so that’ll be another blow to Michael’s defense tactic. Christine will allude to another incident that happened, but Tessa will quickly clam up. She won’t want to make this situation any worse for the ladies – especially Sharon Newman (Sharon Case).

Unfortunately, Christine will keep pushing. When she contends that maybe Tessa was responsible for J.T.’s death after all, Tessa will break down and share the kidnapping shocker. She’ll explain that a bag was placed over her head before she was thrown in a car and threatened. Tessa will admit they eventually left her out in the freezing woods. She’ll be forced identify the kidnappers in front of her.

Once court wraps up, Nick Newman (Joshua Morrow) will blast Tessa outside. She’ll assure Nick that Christine got the kidnapping info somewhere else. At Crimson Lights, Mariah Copeland (Camryn Grimes) will do her best to console Tessa. Phyllis will ultimately waltz over and confess that she never gave up the kidnapping info. Tessa will realize she got tricked into helping Christine bury them.

Finally, Michael will hiss that Nikki and Victoria are to blame for the predicament they’re in. Brittany Hodges (Lauren Woodland), on the other hand, will remain hopeful. She’ll tell Sharon that once Rey Rosales (Jordi Vilasuso) testifies, Tessa will be forgotten.