BY hellodrdavis on November 27, 2019 | Comments: one comment
Related : Soap Opera, Spoiler, Television, The Young and the Restless 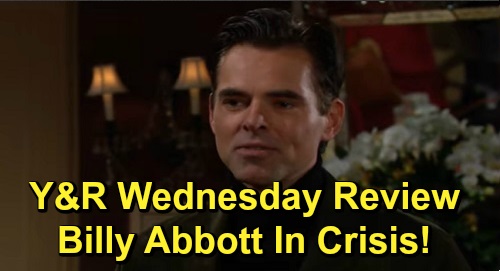 The Young and the Restless spoilers review for Wednesday, November 27, tease that Theo Vanderway (Tyler Johnson) will start his new position as head of social media at Jabot. Kyle Abbott (Michael Mealor) will think that he’s late, but he’ll be off doing some homework that Summer Newman (Hunter King) assigned him. Once Theo shows up, Kyle will immediately be irked by his attitude, but Theo will be driven to succeed.

Theo will make a charismatic but fluffy presentation to his team, while Summer and Kyle watch. Summer will be impressed, but Kyle will think something sounds fishy. Later, Kyle will discover that Theo seemed to lift some of his key phrases from a website. Kyle won’t be impressed, and later Summer will tease him about his attitude toward Theo.

At the end of the day, Theo will regroup with Summer and despite having had a “boundaries” talk earlier, Theo will proceed to gush and hug Summer several times, making her uncomfortable. Cleary, having Theo invade Jabot is going to disrupt things a bit, but it doesn’t seem like Theo could really do anything at this point that Kyle would accept. We’ll see if that changes over time, but for now Theo’s got an uphill battle.

Meanwhile, on the new epode of Y&R on Wednesday November 27, Nick Newman (Joshua Morrow) will try to be understanding as Chelsea Lawson (Melissa Claire Egan) has to go see Connor Newman (Joshua Mackey) after he has another nightmare. Nick will understand that Chelsea’s got to put Connor first, but it will still be hard for him to see her run to Adam’s on a dime. He’ll struggle as she prepares to spend the night at Adam’s again.

Connor will have dreamed about something big and scary chasing him, and he’ll want his mom at his side. He’ll be experiencing stomach pain as well, and Chelsea will arrive at the penthouse shortly after the doctor leaves. Fortunately, there will be nothing physically wrong with Connor; he’ll just be psychologically traumatized, and his stomach pain will be the result of anxiety. Once Chelsea’s there, Connor will seem fine.

Chelsea will tell Connor and Adam that she wants to stay at the penthouse for a few days, which will make Connor very happy. Chelsea will be happy to see her son in better spirits, and when alone Chelsea and Adam will vow to be a united front for their son and to put him first always.

Finally, Billy Abbott (Jason Thompson) will have another therapy session with Dr. Clay (Sandra Thigpen). He’ll happily tell her about quitting his job at Jabot, which Dr. Clay will find interesting and a little troubling. Billy will say that he has perspective now, and that he knows there’s something else out there for him and that he’s going to find it.

Dr. Clay will think that this all sounds very logical and planned, but she’ll also think that Billy is looking for a quick fix to his problems, which doesn’t exist. They’ll chat a bit more, and Dr. Clay will ask Billy an important question – she’ll wonder if Billy even likes himself, which will make Billy think that she thinks he has low self-esteem.

Dr. Clay will explain that sometimes when people self-sabotage, it’s because they don’t feel worthy of love or respect, which can be true of romantic relationships or in work situations. She’ll point out that the pattern won’t change until he figures out the root cause, and she’ll note that Billy hasn’t answered her important question yet.

She’ll ask Billy again if he likes himself, and he’ll immediately tear up, realizing that he doesn’t. After his session, he’ll head to Newman Enterprises, where he’ll see Victoria Newman (Amelia Heinle). She won’t have much time for him, as she’s going onto a conference call, and he’ll leave, appearing thoughtful and sad.