BY Heather Hughes on November 5, 2019 | Comments: one comment
Related : Soap Opera, Spoiler, Television, The Young and the Restless 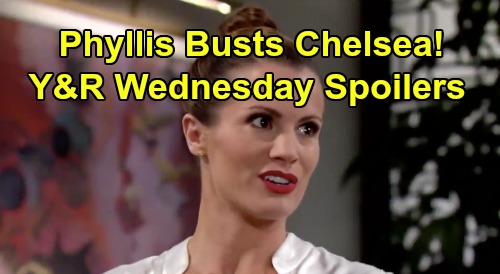 The Young and the Restless (Y&R) spoilers for Wednesday, November 6, tease that Phyllis Summers (Michelle Stafford) will make a startling connection. Some clues will come together for Phyllis, which could spell bad news for Chelsea Newman (Melissa Claire Egan). Phyllis has been spying on her partners at the Grand Phoenix, so it shouldn’t be too hard for her to bust Chelsea.

That’s especially true since Abby Newman (Melissa Ordway) is growing suspicious. She may share her concerns and prompt Phyllis to take a closer look at the situation. Y&R spoilers say Abby will confront Chelsea and hope serious trouble isn’t brewing. Chelsea will assure Abby that she’s got everything under control, but Abby may not be as certain.

Phyllis will do a little digging and show Abby some evidence on a tablet. They may realize Simon Black (Jeffrey Vincent Parise) is a serious threat, even if they don’t know the full story. The last thing Chelsea needs is Abby and Phyllis butting in this nightmare, but she’ll have to stay focused. Chelsea can’t afford to screw up when the stakes are so high – and they’re only going to climb higher.

It won’t be long until Simon threatens Connor Newman (Judah Mackey), so Chelsea will definitely need a solution ASAP. Thankfully, Chelsea will get some assistance from Chloe Mitchell (Elizabeth Hendrickson) and Kevin Fisher (Greg Rikaart). The Young and the Restless spoilers say their covert mission will bring some surprises, but don’t be surprised when Simon’s one step ahead of the game.

Over with Rey Rosales (Jordi Vilasuso), he’ll do whatever he can to support Sharon Newman (Sharon Case). On Tuesday’s episode, Sharon feels a bit blue about her world getting smaller. Her kids aren’t needing her much these days, so Sharon may feel like she’s losing part of who she is. Rey cheers Sharon up with a slow dance, but he may have another gesture in mind on Wednesday.

The Young and the Restless spoilers say Rey and Sharon will continue to take steps forward. Since Adam Newman (Mark Grossman) is now leaning more in Chelsea’s direction, that could be a good thing for “Shey.” Adam was the biggest source of contention before, so anything that distracts him is for the best. We’ll give you updates as other Y&R details emerge. Stick with the CBS soap and don’t forget to check CDL often for the latest Young and the Restless spoilers, updates and news.