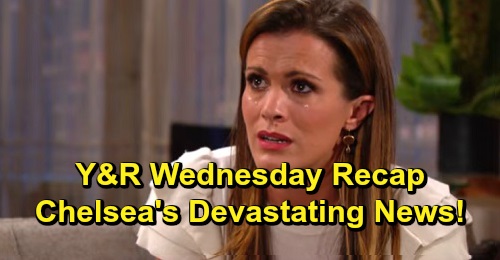 The Young and the Restless (Y&R) spoilers recap for Wednesday, September 18, teases that Summer Newman (Hunter King) will get some comfort from Nikki Newman (Melody Thomas Scott). She’ll still be shaken up over Victor Newman’s (Eric Braeden) death, which Nate Hastings (Sean Dominic) has instructed the hospital staff not to talk about. Nick Newman (Joshua Morrow) will plan to find Victoria Newman (Amelia Heinle) ASAP and bring her up to speed.

At Adam Newman’s (Mark Grossman) penthouse, Chelsea Newman (Melissa Claire Egan) will arrive and start ranting. She’ll be upset about Adam missing his visit with Connor Newman (Judah Mackey), but she’ll change her tune once she hears Victor died. Chelsea will get updates on Victor’s blood disease as well as his heartbreaking collapse. She’ll worry about Adam being alone right now, but Adam will shift the conversation to Nick.

Y&R fans know Nick tossed his brother off the ranch, so Adam will remain angry over that. He’ll also urge Chelsea to tell Connor he’s sorry about missing their time together. After Chelsea exits, Adam will consider giving Sharon Newman (Sharon Case) a call. He’ll ultimately decide to skip it and continue suffering by himself.

At Crimson Lights, Chloe Mitchell (Elizabeth Hendrickson) will talk to Kevin Fisher (Greg Rikaart) about heading back to the boathouse. Once a call from Michael Baldwin (Christian LeBlanc) comes in, Kevin will find out the Newmans are trying to find Victoria. He’ll also find out why, so he’ll shock Chloe with the news that Victor’s gone.

After discussing it, Kevin and Chloe will decide they have to fill Victoria in. They’ll head back to the boathouse so they can do it with Billy Abbott (Jason Thompson) by Victoria’s side. Meanwhile, Billy will feel like he’s really been through it. He’ll be glad the darkness is out of him now, but Victoria will still think he needs professional help.

Next, The Young and the Restless spoilers say Chloe and Kevin will get the scoop on Billy’s breakthrough. They’ll be pleased that Victoria’s going to get the best doctors as Billy continues to heal. Soon after, it’ll be time to drop the Victor bomb. Victoria will think Kevin and Chloe must be lying at first, but she’ll eventually burst into tears and determine that she has to join the others in mourning.

At the ranch, Nick will get a call from a concerned Chelsea, but he’ll insist there’s no need to come over. He’ll let Chelsea know he’s headed home soon. Michael will show up to offer his condolences, but Nick will berate him for doing Adam’s dirty work instead. Once Nikki settles things down, Nick will vow to learn the truth. If anything other than Victor’s illness killed him, Nick will make it clear they’ll find out.

Back at Adam’s penthouse, Phyllis Summers (Michelle Stafford) will try to comfort him. She’ll realize Adam’s been drinking heavily and intends to drink more. Adam won’t want Phyllis’ sympathy, but she’ll believe he needs some support. They’ll talk about Adam swapping Victor’s pills, but Phyllis will suggest that probably wasn’t why Victor died.

Phyllis will ultimately point out that Victor ruined her life as well as Adam’s. She’ll think this really calls for a celebration, so Adam will snark about her finding a silver lining. They’ll argue about whether or not Phyllis wants Nick before she leaves in a huff. Out in the hallway, Phyllis will send a text asking Nick if they can talk.

At the ranch again, there’ll be memorial planning before everyone files out. Victoria will make it there sooner or later and race into Nikki’s arms. Nick will score a hug of his own when he returns to Chelsea. He’ll suggest they shouldn’t tell the kids tonight before talk turns to the investigation. Nick will think Victor’s death was the result of more than just natural causes. It won’t take Chelsea long to assume Nick’s pointing the finger at Adam.

Michael will do the same when he pops in the penthouse on Wednesday. He’ll wonder if Adam had anything to do with Victor’s demise and question if he’ll be dragged into it. The Young and the Restless spoilers say Adam will contend that he’s two steps ahead of him, but Michael won’t think Adam should count on that.

At Society, Summer will still be reeling as she thinks about how weird this is. She’ll tell Abby and Nate it’s strange to know about Victor’s death before everyone else. Abby will dread telling Ashley Abbott (Eileen Davidson), but the news has to spread. It’s all part of Victor’s master plan! We’ll keep you posted as other Y&R details emerge. Stick with the CBS soap and don’t forget to check CDL often for the latest Young and the Restless spoilers, updates and news.