BY Heather Hughes on August 16, 2019 | Comments: one comment
Related : Soap Opera, Spoiler, Television, The Young and the Restless 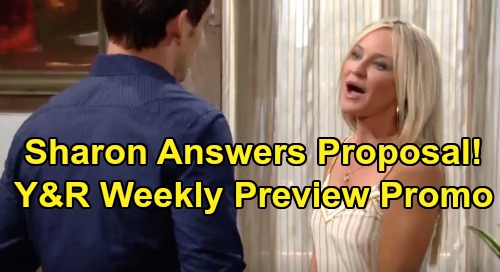 The Young and the Restless (Y&R) spoilers promo for the week of August 19-23 tease that the action’s about to heat up. First, Adam Newman (Mark Grossman) will stun Sharon Newman (Sharon Case) by asking her to marry him. She’ll look at Adam like he’s lost his mind before rejecting the offer. Naturally, Adam’s not the kind of guy who takes no for an answer. He’ll push Sharon to at least mull it over.

Sharon will head over to Adam’s penthouse later, so he’ll ask if she’s got an answer to his marriage proposal. Y&R’s weekly promo shows Sharon saying, “I do.” She’ll have an answer all right, but it probably won’t be the one Adam wants to hear. The Young and the Restless preview shows Adam coming unhinged and hurling his glass against the wall.

Of course, Adam may be upset about a combination of things – not just Sharon’s decision to turn him down. He’ll still be upset about losing visitation with Christian Newman (Alex Wilson) as well as Chelsea Newman’s (Melissa Claire Egan) stance on Connor Newman (Judah Mackey). Adam has also declared war on Victor Newman (Eric Braeden), so there’ll be plenty of tension to erupt in his living room.

Sharon is Adam’s last hope at having someone on his side, so her proposal shutdown may be the last straw. Whatever the case, Adam will have a major outburst while Victor focuses on Michael Baldwin (Christian LeBlanc). He’ll realize just how deep Michael’s in with Adam and worry about the threat he poses.

The Young and the Restless spoilers say Victor will reveal his son’s dark promise to Michael. He’ll insist that Adam has vowed to destroy his family, so Michael had better not be on the wrong side of it. Victor will want Michael to keep that in mind as he prepares to be the new DA.

However, Victor will face a fierce warning of his own. The Young and the Restless spoilers say Victor will be a protective dad this week. He’ll want to watch out for Abby Newman (Melissa Ordway) and defend her interests, so that could mean delivering a blow to Phyllis Summers (Michelle Stafford). Victor will get a visit from an angry Phyllis at Newman Enterprises. She’ll suggest that if Victor crosses her, he’ll lose everything.

Victor won’t seem one bit concerned about Phyllis being a problem. Y&R’s promo shows Victor leaning closer to Phyllis and growling, “Bring it on.” At Society, the Abbotts will have another war going on. There’ll be some infighting due to Billy Abbott’s (Jason Thompson) trust issues and the stress he’s under. Billy will feel like it’s only a matter of time until Ashley Abbott (Eileen Davidson) stabs them all in the back again.

Ashley will get why Billy’s concerned, but she genuinely seems to be cooperating now. Jack Abbott (Peter Bergman) will side with their sister, so Billy will have another reason for his downward spiral! We’ll give you updates as other Y&R news comes in. Stay tuned to the CBS soap and don’t forget to check CDL often for the latest Young and the Restless spoilers, updates and news.