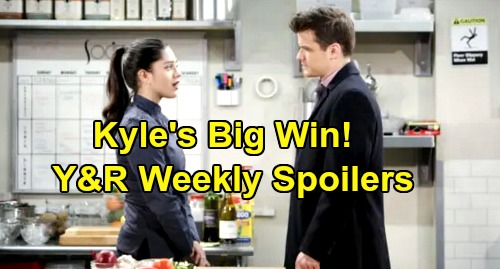 The Young and the Restless (Y&R) spoilers for the week of December 9-13 tease that we’ll see some hidden truths and tricky situations. For starters, Abby Newman (Melissa Ordway) will have to answer for the trap she apparently set. It looks like she staged the jewelry robberies as part of a plan to push Phyllis Summers (Michelle Stafford) out, so “Chance” Chancellor (Donny Boaz) should get the scoop.

It turns out Chance will also get an enticing proposal. Abby might suggest Chance should stick around and be her new head of security. Of course, she’ll have the ulterior motive of wanting to date him! Chance will ultimately decide remaining in GC would benefit him both personally and professionally, so expect him to stay put.

As for Adam Newman (Mark Grossman), he’ll have a lot on his plate. Adam will continue tackling Connor Newman’s (Judah Mackey) issues, but he’ll still find time to needle Phyllis. She may give as good as she gets though! Adam might have something to say about Phyllis’ growing connection with Nick Newman (Joshua Morrow), but she could say the same thing about Adam’s growing connection with Chelsea Lawson (Melissa Claire Egan).

Other Young and the Restless spoilers say Devon Hamilton (Bryton James) will deal with relentless thoughts of Amanda Sinclair (Mishael Morgan). The fact that she looks just like Hilary Hamilton (Mishael Morgan) will be tough for Devon. He’ll be torn between loathing Amanda and perhaps battling feelings for her just based on her face alone.

Despite how overwhelmed Devon will be, he’ll likely keep Elena Dawson (Brytni Sarpy) in the dark. Y&R spoilers say Devon will wrestle with a secret, so his Hilary-Amanda dreams may fit the bill. There’s a good chance Devon will have more of those, which could make his inner battle even more difficult.

Just to make things messier, The Young and the Restless spoilers say Billy Abbott (Jason Thompson) should remain drawn to Amanda. Old habits will cause some trouble for Billy, so he could be headed down temptation road. Billy may not be ready to cheat just yet, but keeping secrets and sneaking around can be almost as concerning.

As for Victor Newman (Eric Braeden), he’ll get a report on Amanda. Victor pushed a minion to look into Amanda’s background, but it’s doubtful he’ll find much. Amanda is clearly running from someone in her past, so she’s kept a low profile. It seems to be an abusive ex, but Victor may not know that part based on the info he learns. He’ll mainly know he doesn’t trust Amanda, so he’ll make it his mission to find out more.

Elsewhere, Mariah Copeland (Camryn Grimes) will kick Summer Newman (Hunter King) when she’s down. She’ll probably get updates on Theo Vanderway’s (Tyler Johnson) decision to dump Summer, which could set off some kind of “Kola” alarm. Mariah’s very protective of her married besties, so she may warn Summer that Kyle Abbott’s (Michael Mealor) still off-limits. She won’t want Summer doing anything that might drive Kyle and Lola Abbott (Sasha Calle) apart.

Speaking of Kyle, he’ll have something to celebrate during the week of December 9-13. Kyle will toast to his own victory, which doesn’t sound like good news for Theo. Some Jabot sabotage may be afoot soon enough! We’ll keep you posted as other Y&R details emerge. Stay tuned to the CBS soap and don’t forget to check CDL often for the latest Young and the Restless spoilers, updates and news.