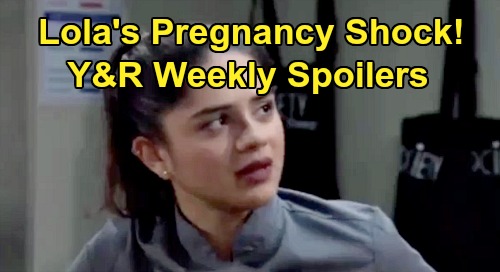 The Young and the Restless (Y&R) spoilers preview for the week of October 14 tease that Lola Abbott (Sasha Calle) will be feeling a little under the weather. At Society, Lola will feel dizzy and struggle to cook since she’ll be battling nausea. She’ll have an aversion to certain foods as well, so Abby Newman (Melissa Ordway) will suspect Lola might have a bun in the oven.

Lola will be stunned over the possibility that she might be pregnant. Since Lola and Kyle Abbott (Michael Mealor) have a very active life in the bedroom, Lola’s probably pretty diligent about taking birth control. However, that’s not always a sure thing. They put 99.9 percent effective on those boxes for a reason! Perhaps Lola’s got a baby on the way despite her efforts to be careful.

Of course, it’s also possible this will just be a pregnancy scare. In that case, Y&R could go a couple different ways with this story. Lola might face some complications related to her liver transplant. It could be a setup to have Kyle lean on Summer Newman (Hunter King) as he worries about organ rejection. We’d also have Summer fretting about her life-saving gift being in jeopardy.

Then again, The Young and the Restless could take another route by having Kyle and Lola get excited about the prospect of a baby. If they’re disappointed to learn there isn’t one, they might discuss actually trying to get pregnant. Having Lola go off birth control could be risky – especially if she sleeps with Theo Vanderway (Tyler Johnson) down the road.

Regardless, this is an exciting development in Kyle and Lola’s story. Over with Sharon Newman (Sharon Case), she’ll get a visit from Rey Rosales (Jordi Vilasuso) at Crimson Lights. Sharon will realize Rey dropped by for coffee and a second date, so maybe this “Shey” reunion will keep moving right along.

Other Young and the Restless spoilers say Amanda Sinclair (Mishael Morgan) will let something slip. She’ll rant about how she can’t wait for this whole case to be over. Amanda will add that she never should’ve let that “old jerk” rope her into this. Devon Hamilton (Bryton James) will immediately know something’s up since Chance Chancellor isn’t an old jerk. There has to be someone else involved.

An easy answer would be Colin Atkinson (Tristan Rogers), who loves to scheme and would have a motive to help Cane Ashby (Daniel Goddard) score billions. Nevertheless, anything’s possible on Y&R. It’ll be interesting to see where this hot plot heads next.

Finally, Traci Abbott (Beth Maitland) will try to solve a mystery. After Dina Mergeron (Marla Adams) falls at her memory care facility, she’ll be visited by Jack Abbott (Peter Bergman). He’ll grow curious after Dina mentions someone named “Stuart,” so Traci will look into this fellow.

A photo from the past will show Dina with several men at a club. One of them will be a newspaper owner named Stuart Brooks, so Traci will decide to keep digging. She’ll tell Jack that if there’s some sort of connection between their mother and Stuart, she’s going to find it.