The Young and the Restless Spoilers: Week of September 16 Preview – Genoa City Reacts to Victor’s Death – Billy Fights for Sanity 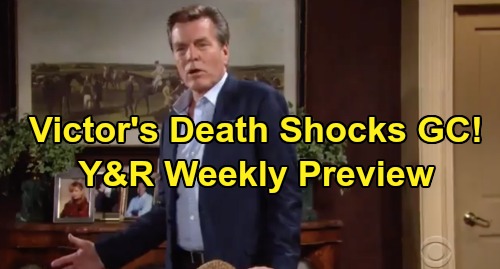 The Young and the Restless (Y&R) spoilers for the week of September 16-20 tease that some devastating blows will be dealt. First, let’s discuss a death that will turn Genoa City upside down. Victor Newman’s (Eric Braeden) demise will leave his loved ones reeling from the loss and wondering how they’re supposed to move on.

News travels fast in Genoa City, so it won’t take long for everyone in town to hear about this. Traci Abbott (Beth Maitland) will deliver the shocker in the Abbott home. Once Jack Abbott (Peter Bergman) returns from his trip, he’ll find it difficult to wrap his head around Victor passing away. He’ll suggest it’s like the world as they knew it is gone.

Victoria Newman (Amelia Heinle) will give Billy Abbott (Jason Thompson) her attention early in the week, but she’ll eventually be brought in the loop on her deceased father. She’ll break down in tears and wish it weren’t true. Well, Victoria is in luck! It isn’t true at all. Eric Braeden isn’t leaving The Young and the Restless, so this is all part of some elaborate scheme.

Y&R is keeping the details of the fake death plot under wraps, but the aftermath should be exciting. There are sure to be plenty of GC residents who won’t appreciate being duped. They’ll be mourning a loss that didn’t happen, but there are some very good reasons behind this grand plan. Even reformed con artist Chelsea Newman (Melissa Claire Egan) will shed a few tears, so Victor will really pull one over.

At the boathouse, Billy will battle it out with his alternate personality. He’ll fight himself as he works to score freedom from his inner demons. Billy will get some special visits from important people in his life – at least versions of them in his head. He’ll tackle some deep issues and start moving out of this darkness.

Billy will also talk to Delia Abbott, but he’ll see her as a young woman in his mind. He’ll imagine who she might’ve grown up to be and hopefully resolve some of the guilt that lingers. Of course, Billy will need to let go of his Adam Newman (Mark Grossman) grudge as well. It’ll all be part of a Billy-centric standalone episode on September 17.