The Young and the Restless Spoilers: What’s Next for Traci Abbott – Beth Maitland New Storyline for Y&R Fans?

BY Heather Hughes on August 7, 2019 | Comments: one comment
Related : Soap Opera, Spoiler, Television, The Young and the Restless 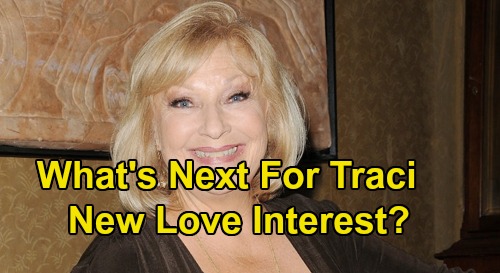 The Young and the Restless (Y&R) spoilers reveal that there’s plenty of drama heating up for the Newmans. However, the Abbotts are being neglected a bit – and there’s one in particular that many viewers would like to see more of. Traci Abbott (Beth Maitland) is a fan favorite, but Y&R pumped the brakes on her latest love story with Cane Ashby (Daniel Goddard). What’s next for Traci?

Of course, the decision to drop Cane and Traci’s romance seemed pretty abrupt, so Y&R writers may not have come up with anything else yet. Beth Maitland’s recent retweet appears to point in that direction. She shared a fan’s reaction to “Trane’s” sudden split, which suggested there may not be much brewing for Traci in the coming weeks or months.

“While I’d like to see Traci with someone else (nothing against Cane) her relationship with him had Traci on my TV screen,” the fan said. “Now with the friend zone… where is Traci??? I miss her!”

There Is A Prime Opportunity To Continue Traci Abbott’s Journey

Since Maitland retweeted the comment, perhaps she’s hoping for more Traci material, too. Many Young and the Restless watchers are right there in the same boat with her!

Even though Traci and Cane’s romantic relationship didn’t work out, Y&R has the prime opportunity to continue Traci’s journey. Cane helped Traci remember that she’s worthy of love and respect. She deserves someone who will listen to her and remind her of how special she is. Traci always takes care of everyone else, but she needs someone who will dote on her as well.

Should Y&R bring a new man in the picture for Traci? There aren’t many options floating around canvas, so that might be the way to go. Even if it’s not a major story for The Young and the Restless, it’d be nice to see Traci find a deep connection with someone.

The show could also get Traci involved in some legal battles over her books or have her take the lead on some new Abbott crisis. If we could at least see more of Traci and Dina Mergeron (Marla Adams) bonding, that’d be great – especially as Dina continues to fade. Once Dina nears the end of the road, Traci could once again be the glue that holds this family together.

On the bright side, Traci should keep popping up in some capacity. When a fan told Maitland she was hoping to see her back on Y&R, Maitland insisted she “Would never leave!!” Hopefully, the show will see the value in giving viewers more Traci in the months ahead.