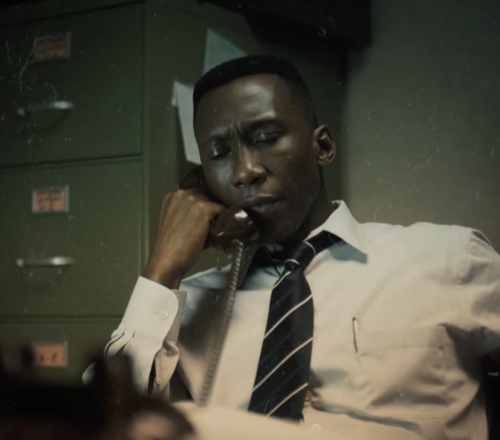 Tonight’s episode begins with Amelia, it appears to be the 90’s timeline and she is reading from her book to college students when Hays appears at the doorway and smiles.

Hoyt is with Hays. he tells him that his man his James and he wants to know what happened to him. Hays said they just had a conversation about the Purcell case. Hoyt says he is videotape of his cruiser following James’ car. Hays asks him what he knows about Purcell, Hoyt says he knows nothing, he is in the dark. Hays says James’ took phone calls from the mother at work and met her in Vegas. Hoyt says that all he knows is that James was last with him. Hays says they should swap confessions. Hoyt says the best thing Ways can do for Julie Purcell, is to just leave her in peace. Hoyt leaves Ways in the woods and leaves.

Fast forward to 2015, Hays and West go to see James’ wife, ask her if her husband knew a black man with one eye. She says a man like that came by the house a few weeks after James died, the man upset her. He asked her if her husband had found the girl. He identified himself as Junius.

Back to the ’80s, Amelia has been writing too much in the paper, claiming the case has not been solved and the DA and chief are both upset about it. They want Hays to sign a paper saying that fragments of hearsay were used without his consent, facts were misrepresented and the women who wrote the piece did so without his cooperation. If he doesn’t, he will be permanently on administration, or he can just quit. Later, West tells Hays worked hard to get them to give him another shot. Hays starts to pack up his things, Hays says he is done. West says just to sign there statement and move on, Hays says he can’t, Amelia didn’t lie. Ways says they will still be friends, he leaves with his things.

2015, Hays and West are at the Hoyt gates, Hays breaks the lock and they drive through. Hays asks what if someone catches them, West says they are old and confused.

Hays and West are in the house, they have flashlights and are looking around. They find a door that leads them to a pink room. Hays says it is where they kept her. On a wall, there is a drawing of Princess Mary, Sir Junius (one-eyed man) and Queen Isabel. West says 25 years and all this time, then he asks Hays what the hell was he doing. Hays says he thought he was doing the right thing, he had a family.

Back to 1990, Amelia asks Hays what is going on, she doesn’t understand why he was burning his clothes in the middle of the night. He says it was a bad part of the case. She wants a straight answer. Hays tells her that there are aspects of his job that is not for sharing, and this is one of those parts. She asks him how can they go forward with big secrets between them. He says there whole marriage is tied up in a dead boy and missing girl.

West is in a bar having a drink, he picks a fight with a man sitting beside him and gets himself beat up, but not before he gives some men in the bar a good beating.

Amelia tells Hays that he is stuck, he could have done so much better than be a detective. He tells her that maybe they both should quit, walk away from it, put this thing down. She can write the books she wants to write, and, well he doesn’t know what he will do.

West is sitting outside the bar on the ground, drinking whiskey and smoking. He sees a dog, tells him to get out of there and starts to cry. The dog walks up to him and stays near him. West hugs him.

2015, West and Hays got an address for Julius. They arrive at the destination and find their man with the one eye. Julius tells them that he has been waiting for them since the night they saw his car.

Julius tells them that he worked with Hays on his chicken farm. Then he starting managing his house. Hoyt’s wife got sick, so he helped raise Isabel, she went to University and met a young man, they had a little girl named Mary. Then there was an accident, her husband and daughter were killed. Isabel was so sad and she was on lithium. Hoyt starts traveling, he can’t stand to see his daughter sad. One night, Isabel snuck off, smashed the car, Harris James helped them keep it quiet. Three years later, Isabel sees this little girl at a company picnic, says she looks just like Mary and she wants to see her again.

Julius talked to Lucy and asked if Isabel could play with her daughter. Lucy wanted money and said that the brother would have too along to make sure everything was ok. For a little while, it was ok. Isabel wanted to adopt the girl, she stopped taking her medication. One day, they were playing hide and seek, Isabell tried to grab Julie, her brother tries to grab her and falls, he hits his head. James’ told Lucie everything, gave her money, she let them keep Julie who was happy to be there. A few years it worked, he had no idea that Isabel was drugging Julie.

Years had passed and Julie wanted to leave, Julius helped her leave, gave her a map to get to a place nearby but she never showed and he was looking for her ever since. After Julie ran off, Isabel had a breakdown, she put on her wedding dress, took all her pills and ever woke up. Julius passed around Julie’s photo for ten years, found out that she had been working at a convent. She stayed at the convent for 3 1/2 years, she had disassociation issues. She had HIV, they took care of her in the infirmary when she got sick, she died there. Julius was too late, he drew her a map, but she ran off. He claims he was sitting outside Hays’ house because he wanted to get up the nerve to tell him what really happened back then. He tells Hays to take him in. Hays and West get up, they leave. Julius screams for them to return and punish him.

West and Hays go to Julie’s grave and apologize for not doing better for her.

West asks Hays if he feels any kind of closure, they both agree that they don’t. West asks Hays if he can crash with him a few nights a week, he says ok. West says that Henry invited him over for dinner, he will come. West is a little apprehensive about leaving Hays alone, they shake hands and Hays hugs him.

We go back to the ’80s, Amelia knocks on Hays’ door and asks why he is ignoring her. Is it because of what she wrote? He shows her his box of belongings from the station and tells her that he doesn’t want to see her anymore. He says she had sex with him, used him for information about the case. Twelve years on the job and now he is a secretary because of her. She tells him to sign their statement, she doesn’t need anything from him, she will be fine.

Back to 2015, Hays just woke up, he looks over at the bed, nobody is beside him. He goes into his office, picks up Amelia’s book and continues to read, a part in the book about a little boy who thought he would grow up to marry Julie. He closes the book and hears Amelia say that what if the ending wasn’t really the ending after all. What if Julie found life at the convent, what if she did reunite with that boy at the convent, what if those nuns who knew she had a bad life were protecting her, by telling a story. Amelia says what if there is another story, what if something good happened, she suggests that Julie is still alive and had a child of her own with that boy. She asks him if that would be a story worth hearing, worth telling. Hays picks up his phone, calls information, asks for an address for the boy, who is now a landscaper at the convent.

Hays drives to the address by himself, he parks outside the house and turns off his car. He picks up his phone and calls his son, he says he is lost and doesn’t know where he is. West gets out of the car, he goes to speak to a woman and a child. She gives him the address, he tells his son. Hays’ memory issues are back, he doesn’t know how he got there. He tells the woman that he has a condition, he sometimes doesn’t remember things. She offers him some water while he is waiting for his son. Hays drinks the water and hands the little girl back the glass.

Hays’ son arrives, and his daughter. He hugs his son and says it is her, his son says he knows. Hays gets in the car with is a daughter, they hold hands and say they miss each other.

At the house, Hays’ son tells him to go play with his grandkids.

West pulls up to the house for dinner, they are glad to see each other. West is introduced to the rest of the family. We see his two grandchildren riding down the street on their bikes, just like the Purcell children did. Hays thinks back to when he was in a bar and Amelia walks in, it was after their fight when he took the administration job. She tells him that she doesn’t let anyone talk to her the way he did. She says that she is trying to remember that a few weeks ago his friend was shot and he almost died. She asks him if he wants a do-over or if he wants to stop. He says he doesn’t know. He then says that he wants to marry her and he didn’t expect this. First, he says he wants to sober up. She tells him that first, they need to get him home and he can think about how he is going to propose and she will think about if she is going to accept.