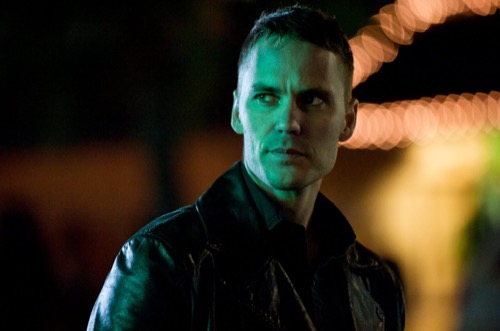 Ten years after the Purcell crimes, new evidence emerges, giving him a second chance to vindicate himself and the investigation.”

We go back to the note that Mr. Purcell received and it is Roland’s turn to be questioned but he claims to have a fuzzy memory on things. Roland goes on to say that Hays thought the kids were lying about the events of the day. Roland tells them that he and Hays were good friends, but when they stopped working together, it just stopped.

We fast forward to the older Hays, he just had a CT scan on his head because of his memory issues.

We go back to Hays, he is in the car with Amelia, she talks him into going to a motel.

Hays and Roland are driving, going over the case again, trying to find anything that would give them a clue to where Julie is. They interview one of the young children, Ronnie Boyle, he says he barely played with Julie or Will. They had back to the Purcell house and continue investigating. Hayes finds some notes and stuffs them in his pocket, they both leave with boxes filled with the kids’ stuff.

Hays is out with his children at Walmart, they just want to go look at toys. Hays picks up a few more things and when he is turned around, his daughter disappears. It takes ten minutes for her to reappear, Hays losses on it her, he was worried sick that something horrible had happened to her.

Amelia decides to do some detective work on her own, she talks to two detectives about the fingerprints at the pharmacy, they claim they were only on the outside shelves, not on the inner part of the pharmacy, but the investigation was cut short because the pharmacy just wanted to get back to business.

Hays and Roland head to an ex-employer of Lucy, its where she worked on the chicken line. Hays asks for the names and dates of hire of everyone at the plant, that is 700 people. Roland asks about the owner, Mr. Hoyt, but he is in Africa.

Back at the station, Roland and Hays are going over the boxes of stuff they retrieved from the Purcell house. Hays starts to lay out the little notes he took from the house. The next day, they continue to search the park, Amelia is there with Hays and he talks a little bit about the war.

We fast forward to after Amelia met with the detectives, she tells him that she might get a chance to look at the surveillance from the pharmacy. Hays gets upset, he tells her off and the two start to get into a fight.

Back to the search, Hays finds some game dice pieces on the ground and when he looks a little further, he finds a bag with toys, which leads him to what appears to be blood and hair on rocks. Hays continue to walk, there is a clearing that leads to a house. Roland and Hays knock on his door, he claims a man came to see him the day after the boys went missing, showed him his badge and asked questions. He told him that he had seen the children a few times going in the woods, he also saw a nice car with a man and woman inside, the man was black. Hays asks if can search his property, the man tells him to get a warrant.

Fast forward to the old Hays in the interview, the reporter asks him why some of the town people were not questioned, and why when the police were told about the new brown sedan driving around, especially on the day the kids disappeared when it was seen leaving Devil’s Den, did the police not react. Hays can’t answer the question, but he remembers the tracks he witnessed in the mud at the park. Hays’ son pauses the interview.

Hays and Roland are looking at the toys that were found, some of the same kind of dolls found close to Will’s body.

A group of the town’

A group of the town fathers runs the Trash Man to the side of the road, they think he looks suspicious, they beat him up and threaten him if he goes near any of the children.

Roland leaves the deposition and goes to see Mr. Purcell, asks him what he thinks of them reopening the case. He says he heard about the fingerprints, They chat about Roland saving him, pulling him out of the whole he was in and claiming he has been sober ever since. The two pray together.

Older Hays is having illusions of Amelia talking to him, his young children running around the house. She tells him he is afraid of what he will find, he needs to finish it.

Hays is at work when he gets a message that a lieutenant wants to speak to him.

We see the trash man go into his shed a remove what looks like a small body wrapped in the green canvass.

Roland shows the Purcells photos of the toys they found, they don’t recognize any of them. Hays starts looking at a family album. Hays calls Roland over, there is a photo of Will, with his hands in a praying position, just like how they found him dead. His father says the photo was of him at his First Communion.

After the deposition and meeting Mr. Purcell, Roland finds Hays in a bar. He tells him about a new task force that he is in charge of, the state wants to reopen the case. Roland asks Hays if he would like to get back to work.