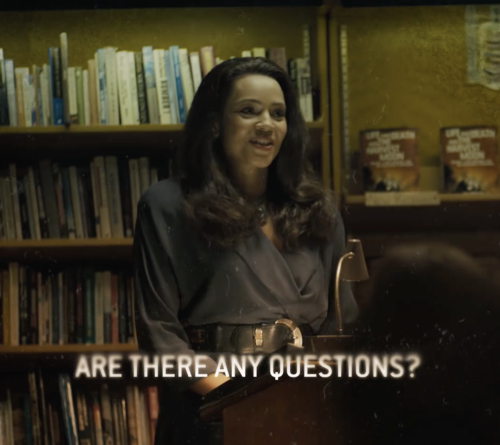 Tonight on HBO their crime drama True Detective airs an all-new Sunday, February 17, 2019, season 3 episode 7 called, “The Final Country” We’ve got your True Detective recap down below! On tonight’s True Detective season 3 episode 6 as per the HBO synopsis, “Following up on new leads, Wayne and Roland track down a man who left the police force in the midst of the Purcell investigation. Meanwhile, Amelia visits Lucy Purcell’s best friend in hopes of gaining insights into the whereabouts of the mysterious one-eyed man.”

On tonight’s episode we start off in the 1990 timeline and Hays drives his daughter for her first day at college.

Then we see Hays at the scene of a crime, a man is found dead, looks like he killed himself and West is already on the scene.

Hays gets home and Amelia is anxious to know where he was, there was a man at her reading, a black man with one eye, he was aggressive and rude, asking her about Julie. She thinks it is the same man they were looking for back in the’80ss who bought the dolls. Hays tells her that Tom Purcell killed himself, it was is his body they found.

We fast forward to 2015 and the holder Hays is with Elise and she asks him if he ever thought that maybe Tom didn’t kill himself, he says he never thought of it that way.

Back to the 80’s we see Tom packing up and leaving in his car when West shows up. Tom says he is going nowhere and wants West to move his car so he can leave. West gives him his personal number, tells him if he gets into trouble, gets jammed up, to call him.

1990 timeline and Amelia stops by to visit Margaret, hoping that she mind get information out of her since she was Lucy’s friend. Amelia tells her about a man with one eye, gave Julie a doll in 1980 and he might have been the one to take her. Margaret gets up and gets some photographs, there is one of Julie and Will, with two ghosts in the background. Margaret lets Amelia borrow the photo, but makes her promise that she will come back and return it the next day.

Fast forward to Hays and Elise, she asks him about a rumor that his wife was writing a sequel to her first back. Hays says that she decided not to. Elise then asks if he shared information with her about the second investigation and he says just like husband and wife talk. West arrives at the house just as Elyse asks Hays if a coverup was ever mentioned. He says he doesn’t think so.

Elise shows Hays a video of when the DA decided to drop the case after Tom killed himself.

Back to the 90’s West and Hays pull up to a motel, ’78 Mercury Capri parked outside, they get a key and enter the room and nobody is there.

In the ’80s Amelia is writing an article for a magazine, she asks Hays if he ever read In Cold Blood. She is thinking about writing more about the crime than the community. She asks Hays if he thinks it is a conflict of interest if she writes about the Purcell case, he says to do what she wants.

Elyse asks Hays if he knew there was a man with one eye asking about Julie after Tom died, he says no. Elyse says she thinks that she believes that one or more of the Purcell parents sold the children off, with the cousin’s help, and that is why they are all gone. She tells him she is disappointed, she had hoped that he would help solve a missing piece. He tells her that he is sorry, he has no answers for her, but he wishes he did.

West is with Hays’ son and he tells him that he really needs to take care of him and make sure someone is with him all the time, he is worried.

Back to the 90’s Hays got some phone records that he was looking for and forgets about going home, he stays at the office to go over them. Meanwhile, Amelia goes to a bar to ask a man questions about the man with one eye and since Hays didn’t go home, she takes the kids with her. The man tells her that he saw that man with Dan, the cousin. Just then Amelia looks in the car and doesn’t see the kids, she freaks out and leaves, but finds the kids have fallen asleep in the back seat.

Hays goes to see West, shows him that a phone number called twice the day before Lucie died, it was from James’ personal line. Hays also got a manifest that showed James went to Vegas. West tells him that all they can do is make their case, what if James doesn’t talk. Hays says this is how they make it right, they need to do right by Tom.

2015, West and Hays visit a woman who worked for the Hoyts and asks her if she ever knew a man name, Harris James. She says he ran security and came on in the last years that she was there. She says that she took care of miss Isabel, the daughter. Her husband and a little girl passed on. She was troubled, never left the estate, then one night, took her car out and drove through a guard rail. After that Mr. June took care of her, he was a black man with one eye. West asks why she left, she says there were too many restrictions and miss Isabel was getting worse.

1990 West and Hays are staked out and find James driving out of the company, they follow him. They pull him over, forcibly take him out of the car. They drive him to an abandoned barn, tie him up and ask him questions. West beats him and Hays asks him questions about Lucy. Hays asks him why he planted the evidence in the ’80s. James is beaten up pretty bad, Hays feels sorry for him and takes off his handcuffs. The moment James is free he attacks Hays and tries to take his gun, West shoots him dead.

We see West and Hays digging a whole, burying James’ body. West is furious with Hays, he says he ruined his life, he killed a man and the evidence died with him.

2015, Hays is struggling with his memory problem, talking about Amelia when he notices a car parked outside his house again. He goes outside with a bat in hand and hits the tail light, as it drives off. West ran outside as well and he took a photo of the license plate, Then we see Hays, he is all alone on the street, still holding his bat, but nobody is around. Hays looks across his fence and see himself burning his clothes after killing James.

Amelia comes out of the house, she sees Hays burning his clothes and asks him what he is doing, where has he been. Hays tells her he can’t talk about it. She tells him that in the morning they have to talk.

The next morning Hays and Amelia sit down to talk. He tells her that there are things that she is better off not knowing. The phone rings, Hoyt is calling and tells him that he would like to discuss the events of the evening before with James. Hoyt wants to come inside, Hays looks out the window and sees two black cars. Hays says they can talk later, Hoyt threatens to go to the prosecutor and Hays says he will be out there in five. Hays tells Amelia to trust him, he will tell her everything later, but just trust him one last time. Hays goes outside, one of the car doors open and he gets inside.