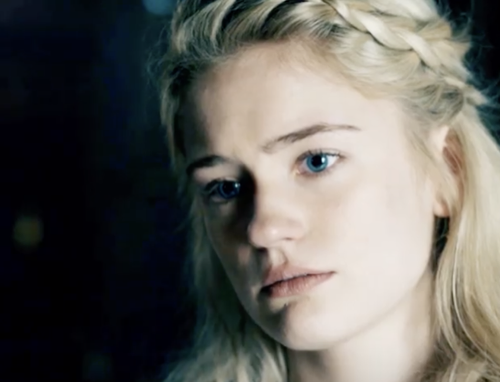 Tonight on the History Channel Vikings returns with an all-new Wednesday, January 30, 2019, season 5 episode 20 Finale called “Ragnarok,” and we have your weekly Viking recap below. On tonight’s Viking season 5 episode 19 episode as per the History synopsis, “A new battle for Kattegat is on and only the gods know who will emerge victoriously.”

Vikings begin with Ivar (Alex Hogh) learning of how they are collecting taxes and have raised 60 soldiers for his army. He summons the blacksmith who knows exactly what he has to do. Ivar is brought to the great hall where he learns that two armies are headed to Kattegat, one led by Bjorn (Alexander Ludwig) and King Harald (Peter Frazen); the other led by two kings they did not recognize, along with Hvitserk (Marco Ilso). Ivar turns to Freydis (Alicia Agneson), as her fellow gods allowed him to see his fate and now all his brothers are against him.

Bjorn, Hvitserk, Harald, and King Olaf (Steve Berkoff) realize that Ivar has been preparing for their seige; Olaf wondering if they should negotiate with him. Both Bjorn and Hvitserk agree that it is useless to negotiate with him.

Torvi (Georgia Hirst) climbs over the sleeping people, asking Lagertha (Katheryn Winnick) what being between life and death teach her. She knows that life is about suffering and there is no escape from it. Torvi doesn’t know how she is supposed to tell her children that life is all about suffering, but Lagertha says they will find out for themselves.

Olaf talks to Magnus (Dean Ridge), Gunnhild (Ragga Ragnars) and Bjorn, speaking how one small brother will fight against brother and the world will be wrecked. This war will last 3 winters as brothers will slaughter sons, women will abandon their menfolk to seduce their own sons. This is the winters of all winters; Bjorn says he knows the gods of Valhalla as Olaf says Odin and the wolf will be the first to engage but the battle will be fearsome but in the end the wolf will swallow the All-father – the death of Odin. Harald joins them saying this is Ragnarok, and it is only a story.

Blacksmiths are busy everywhere, preparing weapons of war. Soldiers line the walls of Kattegat, while Harald, Bjorn, and Olaf discuss strategy, painting their faces so they will know each other from the opposing army.

Freydis wakes up to see Ivar staring at her. He needs to know that she has forgiven him for all the things he does. He apologizes and loves her as she tells him she loves him and forgives him. Before he can say anything else, the horn sounds and men rush off to battle. Ivar kisses her, saying he needs to go and she must take care of herself. She calls him “beloved”.

Ivar climbs the wall to see Bjorn, leading his army on the ground. They have a massive group as the people of Kattegat are told to line the walls. Ivar is completely unaware of Hvitserk and all his men hiding behind the hills. The war cry is sounded as the battering ram is brought forward; Ivar’s men launch their arrows into the people; both brothers determined to get at each other. Ivar laughs as he diverts arrows launched at him.

Hvitserk and his army throw burning arrows at the pillars, then using wagons to jump onto the wall. Magnus hides against the wall, begging to know why he has been forsaken. Ladders are brought to the wall, Hvitserk ais able to get on the wall, desperate to get to his brother, Ivar. Ivar yells at Bjorn that he has come far too late, laughing from his perch. His people pour oil all over them as he orders for them to be burned alive. Olaf screams for them to see the death of humanity. Spilled guts and scorched flesh as they tear each other’s throats out. He shouts for everyone to come and see!

King Harald narrowly escapes death as he drops from the wall. Hvitserk climbs back down the wall, hiding with King Harald under the cart. Harald says they cannot run away now, Bjorn is already at the gate. Everything is burning around them as Bjorn continues to ram the gate. Ivar repeatedly throws fire at Bjorn who is finally able to break through the gate. Ivar watches from the inside and once Bjorn is inside, he drops rocks, sealing a small bunch of Bjorn’s army inside. He calls for his archers, but Shield Maiden Gunnhild climbs the wall able to kill many people. She is a savage, waiting for Bjorn to join her; together they are able to escape and Bjorn orders everyone to retreat. Ivar jeering at them. Magnus rises from the ground, saying Odin is with him as he is Ragnar’s son. He shoots an arrow and then attempts to climb the wall but Harald grabs him. Magnus says he was never a spy but didn’t know who he was until now. He is shot with an arrow and dies in Harald’s arm.

Bjorn shouts at the people, saying he is Ragnar’s oldest son and he is not their enemy but Ivar is. He rules with cruelty and tyranny. Ivar shouts that he is lying, attempting to kill him, but Bjorn stops it, saying to everyone, “You know me!” before he walks away.

Harald finally joins, Bjorn, Gunnhild, Hvitserk, and Olaf. He feels they will not be able to attack the walls again. Olaf says if this were him, he would walk away and everything they have thought if, Ivar has thought about. Hvitserk says him and Bjorn are sons of Ragnar and do not give in. Harald reminds him that Ivar is a son of Ragnar too.

Ivar screams at his army, saying Bjorn is not their friend and if he and Harald succeed in their ambitions, they will have great plans for Kattegat but they do not involve these people and Ivar is the only one who speaks for them; promising to live and die for each one of them. He simply wants their absolute loyalty, otherwise, they will all perish together.

Gunnhild learns Bjorn is thinking about Kattegat, Ragnar (Travis Fimmel) and everything. Gunnhild reveals she had thoughts and dreams too as she lost a husband and never had children. Bjorn questions if she wanted children, but she says she is there to give pleasure to men and doesn’t want to do anything, nor be trapped as she wants to fight and ride wild horses. She asks if she is crazy and Bjorn has an idea that she might be. She wants to have sex, as they both might die tomorrow but if possible she would like to be with child.

Ivar and his people celebrate in the great hall, but Freydis doesn’t see any happiness in it. She leaves by horse, where she is questioned. Hvitserk confronts her as she reveals Thora (Eve Connolly) is dead when Ivar burned her alive along with many others. She apologizes, saying Ivar killed their baby and he is a monster. She tells them there is a secret way into town, she will show the scout where it is and they need to be ready for her to open it in the morning. She wants to see Ivar strung up in a tree. Harald doesn’t know if they can trust her but Bjorn feels they don’t have any other choice.

Hvitserk and Bjorn stand in the dark of the forest, watching Freydis sneak back into Kattegat. She tries to sneak back into bed, but Ivar notices. Freydis says they are attacking the walls again, but he isn’t even sure he needs to get out of bed; he rises to find Bjorn, Hvitserk and their army inside attacking everyone. Bjorn shouts for them to stop, informing the people of Kattegat that they have come for Ivar only. He insists they stay inside as they are there to set them free.

Bjorn walks toward the rows of soldiers and shouts out Ivar’s name, who stands behind them all. One soldier approaches Bjorn, who takes them on by himself. Ivar turns around to his home, looking for Freydis, telling her to come to him as he needs her. He knows someone betrayed him and let them in, she isn’t going to deny it; saying on the body of their dead son, she let them in. Ivar throws down his crutch, kisses her; but after he tells her he loves her, as she is the most beautiful thing that has ever happened to him. A part of him will always love her, but he strangles her; saying he doesn’t have time but he will wait for her. He repeats how much he loves her as she draws her last breath and he cries.

Ivar can hear the battle rage outside in the village. Bjorn is knocked to the ground as an ax is drawn on him. Harald looks at Gunnhild and viciously attacks the man on top of Bjorn. Harald is severe bleeding, but they continue to shout determined to take over Kattegat.

Bjorn and Hvitserk make it into the great hall, calling out for Ivar and his surrender. They barge into the house, finding Freydis and their son’s skull and bones beside her; both brothers get emotional but storm out of there more determined than ever to find Ivar. The throne sits empty as they walk through a battle-torn Kattegat. Olaf approaches them, handing him a flag, saying this is for the new year and Bjorn Ironside.

Ubbe (Jordan Patrick Smith) walks in and hugs Bjorn but doesn’t greet Hvitserk. Everyone’s eyes are drawn behind him as Lagertha walks in with a sword in hand. Bjorn is shocked to see her alive as she hands him the sword of kings; hailing him Bjorn, King of Kattegat. Everyone begins to chant, “Hail King Bjorn!” as he stares into his father’s sword. He notices the sun behind the sword, which is covered in blood.

Ragnar is asking him what he is fighting for as he sits on top of the hillside, remembering his dad asking him what he sees. Ragnar reminds him that Power is dangerous, it tricks the worst and corrupts the best. It is only given to those who pretend to love themselves. The Seer’s voice sounds, saying it has come to pass, the future foretold of the dark raven and the wolf who bears the bones of its corpses. He tells Bjorn to make use of this new world as he can.

Bjorn wants to know what his role and what will become of him. Seer tells him no one will forget the name Bjorn Ironside, greater than Ragnar; but warns him that the war is not over. He puts his finger to his lips, silencing Bjorn before he vanishes.

Ivar is on one of the wagons and handed a sharp knife as he is escorted away from Kattegat; hiding his face.