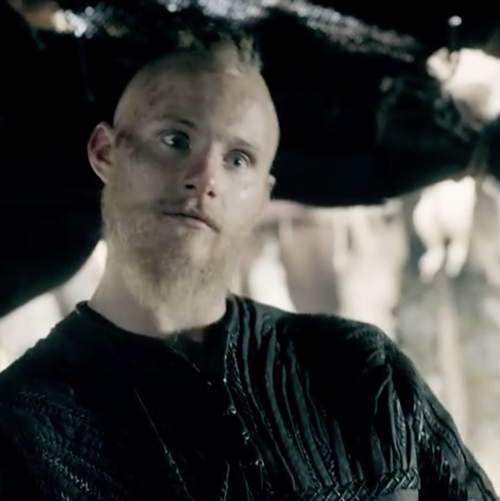 Tonight on the History Channel Vikings returns with an all-new Wednesday, January 09, 2019, season 5 episode 17 called “The Most Terrible Thing,” and we have your weekly Viking recap below. On tonight’s Viking season 5 episode 17 episode as per the History synopsis, “An unexpected turn amongst the settlers leaves Floki powerless. King Alfred confronts Judith. In York, Bjorn must strike a deal with Harald. Wessex is once again threatened by a Viking force, but who will lead the Saxon army to defend the Realm?”

Vikings begins tonight with a funeral mass, King Alfred (Ferdia Walsh0Peelo) walks in to learn that his brother Aethelred (Darren Cahill) is dead. Judith (Jennie Jacques) says no one knows how he died as it was so sudden. He crouches down and weeps over his brother’s body, bidding him farewell.

In Iceland, Floki (Gustaf Skarsgard) walks with Helgi (Jack McEvoy) and Kjetill Flatnose (Adam Copeland) back to his family where Eyvind (Kris Holden-Ried) is grateful for them, saying Floki is right that they need to change.

Meanwhile, King Ivar the Boneless (Alex Hogh Andersen), with Freydis (Alicia Agneson) welcomes them to Kattegat, the greatest trading station in the world. He says his father, Ragnar (Travis Fimmel) wanted this and their father, Odin has given him this responsibility and they cannot give everyone the power to vote as he has a duty to protect it so they need to change the rules.

Judith packs up Aethelred’s wife’s belongings, saying since her husband is dead, she needs to return to her mother and she is young enough to find another husband. She prays the next mother is nothing like Judith, as she shows no remorse or compassion for her dead son.

Ivar says the people whom he trusts will vote on land issues, and he will lead them as it is important to know who is with them and who is against them. He feels it is time to find those who are against them and threatening to them; suggesting it might be people they know, a neighbor, a brother or a son. He says people talk about him being the enemy but they are the enemy as people shout that they want Ivar to protect them and destroy their enemies; everyone shouts out Ivar, except for Hvitserk (Marco Ilso) and Thora (Eve Connolly).

Judith talks to Alfred, saying she had to deal with the traitors while he was sitting and possibly they still are. She admits she had to deal with his brother, explaining that Aethelred’s death was not natural. Alfred orders her to explain and quickly. She says she knew as long as he was alive he would join any plot or conspiracy to make him king as he never forgave him for overstepping him. She reveals she poisoned him, killing one of her sons to save the other; asking God to forgive her. Alfred destroys the whole dining area, once he settles she orders him to behave like a king and asking he must be prepared to do terrible things if he wants to survive.

Hvitserk sits in his place, while Ivar talks to Freydis about how much his brother hates him; but if he kills him who else would stand against him. Freydis feels it would be a mistake as a merciful God will always be more popular among the people than a vengeful god. She wants to know if he would rather be loved than feared, but he doesn’t know the answer.

Floki stares at the raging ocean before returning to Eyvind’s place. He wants to know why they are not getting ready but Flatnose says they are ready and attacks Helgi and the entire family as Eyvind watches. Floki tries to stop it but he is held back with a knife to his throat as Flatnose says his only ambition is revenge. He orders for Eyvind and Helgi to go outside as they will deal with them in the morning, leaving Floki and Flatnose inside, staring at each other.

Hvitserk is startled awake by Ivar who says he has been thinking about him. He feels Hvitserk can be more useful to him and needs a more important role, telling him he needs to leave Kattegat and go build an alliance for the coming war. He is told he cannot refuse and introduces himself to Thora, who says Hvitserk and her love each other. Ivar says it would be a pity if he had to burn her alive as Hvitserk holds a knife to his throat. Ivar promises he will not do that if he agrees to leave Kattegat first thing in the morning.

In the pouring rain, Helgi apologizes for bringing the men to his father; but he tells him not to snivel as they are just meat. Inside the hut, Floki doesn’t understand Flatnose, who explains that it isn’t possible for him to forgive them for what they had done; he reminds Floki that they are what they are as the gods had made them so. Floki says he cannot kill Helgi as none of this is his fault and at least spare him for loving his daughter. Flatnose says if Helgi is still alive in the morning, they will consider saving him, as it would make them all feel better.

In the morning, Eyvind is brought to Flatnose, who chants, saying his death is on his way. He raises his ax as Helgi is brought back inside. Eyvind says he is not afraid of the ax and spits on Flatnose; who raises the ax.

Helgi pleads with Floki to let him live, who assures him that Flatnose knows he has always been by his side. Helgi is called outside as Floki tears up. Helgi sees his father beheaded as Flatnose continues to chant that “each must die someday.” Later a raven is seen on top of one of the 3 heads on spikes.

In York, Bjorn (Alexander Ludwig) sings along with all the Vikings, who are singing “death is on its way!” King Harald Finehair (Peter Franzen) watches Gunnhild (Ragga Ragmars) who is busy beating several of the men. Bjorn stands next to Harald, saying they need to make a plan as he is growing impatient. Harald doesn’t want to go because at this time of year there are many storms, but Bjorn feels it is safe as his father had told him in a dream. They both admire Gunnhild as Harald says that Ragnar chose him over Ivar and he will rule Kattegat. Harald tells him about the arrangement he has with Ivar that if he dies Harald will be king of Kattegat. Ragnar tells him that he needs to start giving the orders and send out the ships, promising him Gunnhild with no consequence to him. Harald smirks, saying Bjorn will have his ships.

A soldier rushes off his horse informing Alfred that the ships of a large Viking army have been seen in West Wales and will arrive on their borders within days. Ubbe (Jordan Patrick Smith) and Torvi (Georgia Hirst) learn they are Danes and crossing with at least 300 ships. Alfred says they will have 2000 people but the Danes will have at least 1000 more. Torvi says the Danes won’t be frightened to see who is in front of this army as she has a terrible habit of telling the truth. Ubbe advises that Alfred makes him the head of his army, he will find a way of dealing with the Danes.

York prepares weapons as Gunnhild wants to know why Harald hides in the shadows as he is king. Harald reminds her that fate has brought them together, even she said that while she was married. She says she is no longer the person she was, but Harald disputes that, saying inside they will always be the same. She says that Bjorn has not claimed her as no man will claim her. She tells him she doesn’t know about the gods, asking if he wants to be king of all of Norway; and she tells him she would like to be queen then.

Judith is interrupted as one of her ladies asks what she is doing, but she won’t tell her. Back in Iceland, Floki returns with Flatnose and a few other men as Aud (Leah McNamara) wants to know from Floki what happened. He reveals Flatnose and the others killed her entire family and he couldn’t stop them. She weeps, hoping they didn’t at least kill Helgi; but they are all dead. He apologizes, saying he should never have brought them all to this place, asking her if she ever saw the gods. She just stares at him.

Hvitserk says farewell to Thora, warning her to be careful of his brother. The horns sound and Hvitserk leaves Kattegat. Meanwhile, Gunnhild joins Bjorn who reveals he knows about the offer King Harald has for her. She admits he has said they are fated to be together, but she reveals no one knows their fate. She says Harald still wants to be the king of Norway as Bjorn says he is a man who always wants to be in love and wishes he could have his heart instead of his. He tells her he has never been in love, but thinks of her all the time; perhaps he is in love but she could be in love with King Harald who could make her queen of Norway.

He admits he is afraid to ask if she loves him, which surprises her since he is one of the most feared men in the world. She stands up and says she respects him even more for saying it and will take her words forever in her heart. She holds his hand to her heart, asking him to say it. Bjorn stands up to her as she repeatedly asks him to say it. He finally says he loves her and kisses her; the two lie on the bed and kiss. King Harald sits on his throne, holding Astrid’s necklace and waits.

Aud climbs high and wanders to the cliffs overlooking the waterfall. She stares downward as Floki looks on, shouting at her. He drops to his knees as he watches her leap down into the watery depths below. He sits up and stares out at the waterfall.