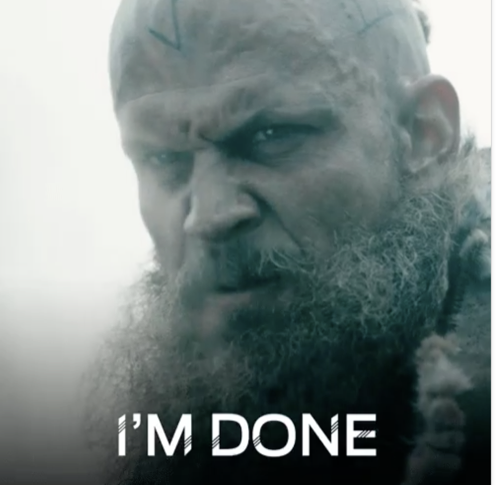 Tonight on the History Channel Vikings returns with an all-new Wednesday, January 23, 2019, season 5 episode 19 called “What Happens in the Cave,” and we have your weekly Viking recap below. On tonight’s Viking season 5 episode 19 episode as per the History synopsis, “Ubbe is forced into hand-to-hand combat; Floki reaches new depths and is met by a shocking sight; Bjorn sets off for Scandinavia with an old rival.”

Vikings begin with Floki (Gustaf Skarsgard) climbing the depths of the cave to see what is down there. Meanwhile, Alfred (Ferdia Walsh-Peelo) mourns the death of his mother, Judith (Jennie Jacques) as Lagertha (Katheryn Winnick) reminds him that she succeeded her duty here and now his duty is to become the great king she wanted him to be.

Ubbe (Jordan Patrick Smith) walks with Torvi (Georgia Hirst) as he fights against King Frodo (Gavan O’Connor-Duffy) to the death. They are both blessed by the gods as Torvi nods to Ubbe just before the fight begins. King Hemming (Erik Madsen) and King Angantry (Markjan Winnick) watch the duel unfold. Both men take quite a beating, Torvi looks frightened for Ubbe as he lays on the ground reciting the Lord’s Prayer. Frodo grabs his weapon but before he can use his ax, Ubbe kills him with his blade.

Lagertha walks the halls, as she remembers Bishop Heahmund (Jonathan Rhys Meyer) begin killed in the battlefield and how she escaped. She recalls the witch who took care of her, saying she is in Wessex and at the point of death when she found her. She is reborn and she must forget her old life. She cuts off Lagertha’s hair, burning it, saying it is the beginning of her new life.

Floki wanders the caves of Iceland, saying he knows they are there, deep inside as he can feel and hear them. Floki can hear the waterfall through the rocks.

Someone in the crowd draws his sword and Torvi kills him, she checks on Ubbe who draws breathe and she yells that the son of Ragnar has won, everyone chants his name. Ubbe is brought back to Wessex, where Alfred says to bring him back to his chamber; Torvi says he prevented the war. Torvi is happy to see Lagertha but more concerned for Ubbe.

Freydis is furious with Ivar (Alex Hogh), demanding to know what he has done with their son. He blames her for not giving him a beautiful son, but he slaps her when she screams at him. In the meantime, Bjorn (Alexander Ludwig) travels with King Harald (Peter Franzen), Gunnhild (Ragga Ragnars) and Magnus (Dean Ridge) struggle through the storm.

Floki finds a cross in the middle of the cave and begins to laugh hysterically and then he screams out in disappointment as the rocks around him begin to crumble and erupt like a volcano.

Bjorn’s fleet arrives to a land where he thinks he recognizes the mountains. He believes beyond the mountains is Kattegat; but argues with Harald who says this is still his army. Harald says if he makes a deal with Ivar, he will have to kill Bjorn; they both know the stakes. Harald doesn’t believe Bjorn is protected by the gods and bleeds like any other man; they draw their swords and begin to fight right on the beach in the rain. Gunnhild slaps Bjorn, saying they are both stupid, saying they both want the same thing and if they have to, fight later!

Torvi walks into Ubbe’s room, where nuns are praying for him. Back on the beach, Magnus is questioned why he called out to the Christian God when he is Viking. He says he had to in order to make them believe him; he is angry that Bjorn had someone look out for him. Bjorn is shocked to learn that his little brother is a Christian. On the mountain top, the fleet is observed.

Alfred rides with Torvi and Lagertha, where she is shown the land that Ragnar was promised. Alfred says this is the lands are blessed by their God and gods; the Vikings step forward to enjoy the lands, as Lagertha touches the soil, asking if Ragnar can see this, watching their dream happen.

Ivar enters the great hall, while everyone looks at him he tells them all to “carry on”. He returns to their home where Freydis reveals hunters have found part of their son, saying he was eaten by foxes, wondering if he was eaten alive. Ivar eats his apple, as Freydis wants to know if Ivar killed their son. He demands to know what she has done for him, wanting to know if he was really his son; was that poor crippled bastard was his son, accusing her of being a liar. He begins to strangle her as she shakes her head saying “no”.

Hvitserk (Marco Ilso) walks with King Olaf the Stout (Steven Berkoff) who still questions whether he made the right decision going with Hvitserk. He says Ivar appears to be powerful and believes fate is on his side, but all he knows is that the gods work in mysterious ways. He worries that he is marching willingly to their own death but laughs about it.

Lagertha walks into the church as Torvi returns to check on Ubbe. He says it is good to be alive. She tells him that he has realized his father’s dream as 3000 Danes have moved into the settlement. He says he is glad. Torvi orders everyone to leave them, wanting to know what is wrong. He wants the cross, saying something has changed inside of him but not sure if it was during the fight or after. The cross means nothing more than a broach to him. He only wanted what Christian could do for him and his people, saying he believes in the old ways. He was filled with the spirit of Odin and Thor as they were familiar spirits, he called for them and they answered him.

Lagertha washes, as she sees the scar on her face and neck in the reflection. Ubbe gathers his children in the wagon and is ready to go to the settlement, bidding farewell to Alfred and his wife. Lagertha would like to go with Ubbe, who quickly agrees as she says it is time to go home.

Ivar tells his people that Spring is coming and everything changes, revealing his wife gave birth to a child that was beautiful as Odin, the Sun God. His love for the child overflowed but the gods cut his life short, but it is hard for a mother to accept those things but the will of the gods cannot be denied, and with all humility, they have to accept their choices. He talks about their plan to go after York, he was expecting a great army with Hvitserk and King Harald but unfortunately, they are not there, so things have changed.

Bjorn meets with Hvitserk, asking where he is going with such a large army. He reveals he is attacking Kattegat with King Olaf and with him; Bjorn grabs him and says this is the happiest day of his life. They are sad to kill Ivar, but it is not a shame before the gods. Hvitserk says he always questioned the gods about how he let Ivar humiliate him but now he knows his fate is to kill Ivar; together they toast to killing him.

Ivar says they are not going to attack York, but instead, renew and strengthen the defenses of Kattegat as no one will overcome Kattegat as the gods are with them!