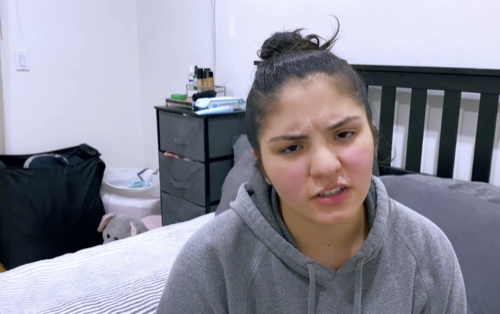 Tonight on MTV their reality show 16 & Pregnant airs with an all-new Tuesday, October 13, 2020, new season and we have your 16 and pregnant recap below.  On tonight’s 16 and pregnant season 6 episode 2 as per the MTV synopsis, “Rachelle is the youngest of her 5 siblings and her parents always had big dreams for her. So when she got pregnant with her boyfriend Chase after only a month of dating, they were devastated.

Being pregnant while also getting to know the father of her child is a lot to juggle, especially without her family’s support. So she’s jumping into everything headfirst and may end up sacrificing her own happiness to make things work with Chase.”

Tonight’s 16 & Pregnant episode is going to be exciting, and you won’t want to miss it. While you wait for our 16 and pregnant recap, check out all our television recap, spoilers, news and more, here!

Rachelle is 19 and pregnant with her boyfriend Chase. She comes from a very religious family. They don’t like Chase much. They have only been together for 2 months. She has moved in with him and now misses the support.

Rachelle is now 34 weeks pregnant. She spends time with Iris, her older sister. They get along great. They head out to eat to talk about her upcoming baby shower. They also talk about Chase. Iris thinks he might be a little controlling. Rachelle doesn’t feel like he is. They talk about the family being sad about her pregnancy. Rachelle is upset because she misses her parents. They both start to cry.

Chase and Rachelle talk when she gets home. She is tired and this whole pregnancy is feeling very real. Chase tells her he is tired and works a lot. She tries to explain that her tiredness is different. He thinks she is complaining too much.

35 Weeks Pregnant – Rachelle is lonely since Chase works so much. Chase meets with a friend while she meets with her parents for a meal. They talk to her about respecting herself and how Chase seems like a hard worker. They also share their pain about what they are going through. She leaves crying.

At home, Rachelle struggles to be happy. Her parents are so unhappy about her pregnancy. The next day she and Chase arrive at her sister’s for her baby shower. Iris has gone all out. Rachelle sits with her friends and talks about school.