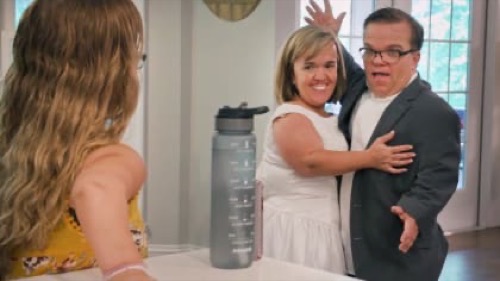 Tonight on TLC America’s largest know little family, 7 Little Johnstons returns with an all-new Tuesday, December 29, 2020, episode and we have your 7 Little Johnstons recap below. On tonight’s 7 Little Johnstons Season 8 Episode 1 Premiere “Love In The Time Of Corona,” as per the TLC synopsis, “To keep boredom at bay during the summer quarantine, the kid’s rope Trent and Amber into viral video challenges. It’s great family fun, but the cabin fever is putting a cramp in Trent and Amber’s bedroom life, so they decide to try a pole dancing class.”

It’s been about a year since the family has seen its film crew and a lot has gone one. Elizabeth has graduated and gone on to college. Jonah has found a full-time job. Anna has round up her first year of college. Emma and Alex are starting their freshman year of college. And, Amber is starting a new job at the school. The biggest job for the Johnstons is the pandemic.

Jonah got a job with the state, and plans to go back to school in the next couple of months, he is dating his girlfriend Ashley, they have been together for about a year. Ashley is coming to visit in a couple of days.

Elizabeth is about to start nursing school, she is also working full-time as a nursing assistant and still dating Bryce for two years now. Everything is going great with Bryce, they do the same old thing.

Alex’s voice went from innocent and young to older and squeakier.

The family is bored, so they decide to do dance videos on TikTok. Anna explains to Trent how it works. The girls then decide on an egg cracking challenge. Anna doesn’t even make it to the counter with the eggs and drops one. Anna and Emma try to crack the eggs with their biceps, they couldn’t get it and say they have pretty good muscles.

Then they try their hands and still don’t do it well. Finally, Anna does it with her hands. Emma then tries to sit on hers, it doesn’t work. But then, it works, the “booty challenge” wins for Emma.

Trent buys Alex a razor, a little mustache is starting. Trent gives him a lesson on how to shave. Puberty has hit in for Alex. Joseph tells him that his whole life starts now, he is about to be fifteen, and he has to put forth the effort to make things happen.

Trent and Amber decide to do a TikTok video to show their relationship over the years. The first look is when they were dating, twenty-five years ago, then in their wedding clothes, then Amber pregnant. Amber loves TikTok, she thinks it was a good idea to do.

Brice went fishing and caught a lot, so the family is going to cook them for dinner. Amber and Trent are very supportive of Elizabeth and Brice’s relationship, they are talking when they get married and Trent wants them to slow it down. All the kids like the two together as well, Anna says they are perfecto.

The dating rules for the Johnston family is sixteen. Emma admits she has been talking to boys, but just talking.

Ashley arrives at the house, everyone welcomes her. Amber tells Jonah to put her things in the guest bedroom. This is Ashley’s second drive down and she says this one was better. They try to alternate visits so each of them get to know each other’s families and friends. Although at home, Ashley is the only little person so she feels good when she visits the Johnstons. When someone visits, there is nothing fancy, they have a good time, feed their guests well, Trent says.

Ashley says her relationship with Jonah is good, they talk about their future. Trent and Amber like her, she puts Jonah in a good mood.

Watching Jonah and Ashley in their relationship, Trent says it is a little nostalgic. Amber tells Trent they are coming up on twenty five years they need to spice things up. Trent says he hasn’t showed her all his tricks because he didn’t want her to get board. They start laughing and he says maybe they put a pole in their bedroom.

Amber and Trent go to a pole class, there is a reservation on how much they will be able to do because they don’t have long legs. The instructor tells them that pole fitness is for everyone. Trent seems to take to it well, he is more at ease. Amber takes a little bit more to get comfortable, but soon the anxiety is gone. Trent was overly impressed with what the two of them could do and thanks Amber for signing them up.

Outside at the pool, Trent and Amber ask Jonah questions about his relationship with Ashley. He says it is serious and doesn’t care if he moves there or she with him. Anna says Ashley should move in to their place, then Jonah will always be a nicer person. Elizabeth chimes in, she says she is serious with Brice.