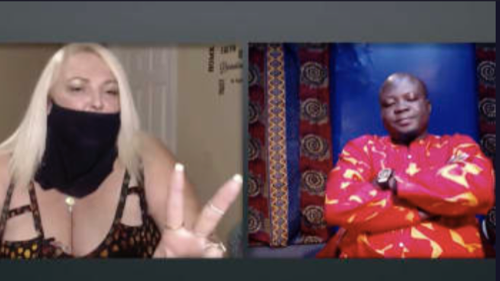 It’s Part III of the Tell All! The couples from this past season of “Happily Ever After” were back tonight to answer the tough questions and up first was Angela. Angela was a very hard woman. She has an explosive temper and she’s always been clear that she was an American. Angela was used to a certain lifestyle that being an American she was set on. She went into her marriage with Nigerian Michael and she told him that she wasn’t going to be submissive. She said she wanted equality. She got Michael to agree to equality and in truth, their marriage doesn’t seem equal. It more appears like Angela is the one who is making all the decisions.

Angela decided what kind of marriage they were going to have. She was the one that was constantly yelling at him and she was the one who changed her mind about being married to him on any given day. Angela was in charge here. Michael just agreed to do everything she told him to do and his family wasn’t comfortable with that. They were used to a different lifestyle in Nigeria. In Nigeria, women are submissive to men. It was them who went out to work and support their households. It was the women that stayed home to raise the children. Michael’s Aunt Lydia wanted Michael to have a traditional Nigerian marriage and she continues to but heads with Angela.

Angela said she was never going to give that much leeway to someone’s else culture. She reminded Michael and his family that she has her own culture as an American. In America, women could work. They could be the breadwinners and men can stay home. Angela tried to tell Lydia that her marriage to Michael was going to be following her culture and not his. Only Lydia didn’t like that. She kept saying that Angela needed to honor her husband and the only man Angela is ever going to honor is God. Angela was also set on her views. She had the support of the other American woman on the show.

Elizabeth, Tania, Kalani, and even Debbie weren’t having what Lydia was selling. They told Lydia to back off and they threw their support behind Angela. They’ve all heard about their men’s traditional culture. It has caused problems for them as well and they were sick of it. Kalani felt constantly undermined every time Asuelu brings up his culture or doesn’t want to respect the doctor because the doctor is a woman. Elizabeth was the earner in her family. It was her husband that stayed home and took care of their child. And Tania was just doing her best to get her husband to respect her enough to ease up on her drinking.

The women were sick of hearing about the traditional culture. It wasn’t how they were raised and so they needed the guys to respect their culture as well. Angela said she was willing to divorce Michael if he pushed it with her. Michael clarified his answer from earlier about getting a child from another woman. He said he didn’t want to take a second wife and that he was talking about surrogates and adoption. Michael wanted a child. He just wasn’t going to disrespect his wife to get one. He and Angela calmed down from the divorce talk and things quickly moved on. The host, Shaun Robinson, started asking the couples about their baby-making plans.

Syngin wasn’t in the right frame of mind to be thinking about children. He said he needed to find himself first and so Shaun asked Larissa and Eric. They’ve been together for a while. Is it in their plan to have kids one day? Larissa said she was willing to have a child with Eric. She said first she had to be married and Eric had to meet her family in Brazil. Eric also said he would have children with Larissa. He hesitated about whether or not he was ready to get married only he ultimately said he would marry Larissa. The two of them have come a long way from their big fight this season. This season they got into a nasty argument because Larissa found out Eric was badmouthing her to other people.

Larissa contacted another one of Eric’s exes. She reached out to a woman named Nathalie and Nathalie told her that Eric couldn’t wait to call Larissa every name under the sun. Eric made it out like he hated Larissa at the time. The two were broken up and it had been Larissa to end things. Eric lashed out because he was rejected and so he was indiscreet. He talked about his sex life with Larissa with other people. He talked to everyone about Larissa and he even reached out to Larissa’s ex-husband Colt. Eric is now claiming that he had been tricked into speaking with Colt. He said Colt invited him over one night and that he got wrapped up in the moment.

Eric is now back with Larissa. He, therefore, needed a reason to justify his actions to her and Larissa wanted to believe him. The two were a couple again. Larissa didn’t want to believe that Eric hated her or that he reached out to Colt. She fell for his story when he said it was Colt that reached out to him. Colt was there tonight to refute this. He said Eric invited himself over to the house he shares with his mom and that he and his mom made the best out of the situation. They cooked him spaghetti as a way to break the ice. They claimed it was all Eric who started talking crap about Larissa and once again Larissa chose to believe Eric when he said it was all Colt.

Larissa wouldn’t listen to a word from her ex-husband because she still hates him. She also hates his mother and Nathalie was a near stranger to her. Larissa believed Eric’s story. She was staying with him and she was happy. Colt’s other ex Jess was happy as well. Jess moved on from her relationship with Colt and she was with someone new. Jess has even married this new guy. She was a married woman and so of course Debbie and Colt were accusing her of getting a green card out of her marriage. And they really didn’t like it when they heard that Jess met Brian thanks to Larissa’s friend Carmen.

Jess only knew Brian two weeks when they got married. Brian apparently proposed to her because she lost her job and he didn’t want her to leave the US. He said they’d get to know each other over the course of their marriage. The newly married couple were happy and in love. The other couples congratulated them on their marriage. The only one who wasn’t happy was Colt. His parting words tonight is that he dodged a bullet with both Larissa and Jess. The women ended up laughing at him because they both knew he wasn’t as happy as he claimed. And Debbie wasn’t there to hold his hand because she stormed out when Jess was asked how different Brian is to Colt.

In other news, Angela is getting weight loss surgery. This was a surprise for her husband who didn’t like the idea of surgery and he didn’t want her to go through with it.

Kalani in the meantime was asked if her marriage could be saved and she said she doesn’t know.