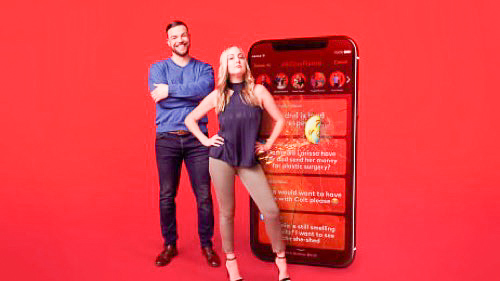 Asuelu and Kalani get ready to watch the latest episode. In the episode, Asuelu gives Kalani roses. She smiles when he tells her they smell of his love. He then takes her ax throwing. He picks up on her lack of excitement. The read tweets from viewers. Once tweet teases them about chest-bumping instead of kissing. In the episode, Asuelu talks about missing his family. They also laugh at how he cannot stop looking at Kalani’s chest.

Angela sits to watch the episode where she heads to the gynecologist. She asks about getting pregnant at 54. The female doctor looks for her ovaries. Angela comments about the pressure and how it feels bigger than Michael’s penis. Annie and David laugh hysterically. The doctor then tells Angela she needs to be checked for cancer.

Libby and Andrei watch the episode where they are fighting about having their wedding in his home country. Andrei tells her he doesn’t care if her family can go, he just needs her dad to pay. She laughs. They continue to watch as Libby and her sisters all sit in the pool while they breastfeed. They read tweets, teasing them for their “synchronized breastfeeding.”

Deb, Colt, and Jess all get ready to watch their episodes from their homes. They watch the episode where Jess asks him if he going to tell his mom about her. She knows now he lied about every for sex. Jess reads tweets about Colt makes weird movements with his eyebrows and laughs. As the episode continues, they watch as Colt talks about his ex-wife being arrested for domestic violence.

Jess shares that Colt was terrible at sex. He was inexperienced but this allowed her to teach him. Deb rolls her eyes.

Syngin and Tania sit to watch their episode. They are ice skating. It is clear Syngin has been eating well in America, the other couples joke. Tania loves his American belly. They continue to watch as Syngin makes an inappropriate comment in front of Tania’s mom about a sex room.

Libby and Andrei watch the episode when she talks to her dad about a wedding in Moldova. Her dad isn’t happy that she has shown up 2 weeks later to discuss it and ask for money. The whole situation is uncomfortable. Andrei laughs. Libby is annoyed. That was a tough moment for her and her dad.

Colt and Deb continue to watch as Colt and Jess meet with friends. They read tweets about Colt and Deb’s close relationship, calling the husband and wife. They then watch the scene when he told Jess he is tired and wants to go home. She wants to stay and drink with her friends. He tries to guilt her into going home with him. He views a Tie Tok sent to him. The video shows the exact same situation between a man and his dog. Jess thinks he is a manipulator.

Syngin and Tania watch as they visit her sister. They talk about money and working. He bartends and hopes to work in the U.S. but a call to an old boss makes him look bad. He got drunk and broke chairs. He admits he can act a little crazy. Annie and David laugh hysterically.