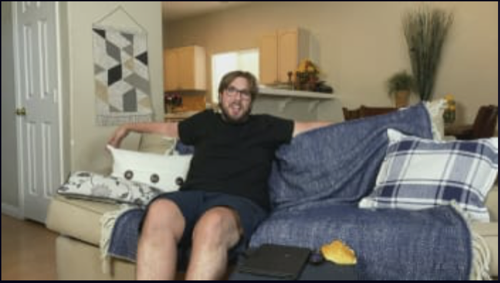 Angela tries to find a snack to watch an episode with Michael. After fining cheese and crackers she sits to watch the episode where she goes to get a biopsy. She recalls being scared. She screams in the scene. She reads a tweet about not wanting to be in the next exam room. The doctor gives her laughing gas. After the doctor shows the needle. Anne and David gasp. Michael never knew she went through all of this.

Kalani warns that she plans to watch a very serious episode. She grabs some alcohol for the watch party. Asuelu joins her. They watch as they bring their sick kids to California. It is Oliver’s birthday. Someone on Twitter asks why a baby needs to celebrate. They watch as the kids scream in the car. Asuelu recalls wanting to jump pout of the car. After arriving, Kalani’s mom comes to get them. Asuelue is in a bad mood and while talking says American moms have it easy. He apologizes now for saying that. In the scene, he also swears, making fans angry.

In Florida, Liz is excited about her new short hair. She puts on some makeup. Andrei comes to get her. They watch the episode where they visit his family. They read several tweets joking about how much Ellie travels as a baby and how Andrei must be adopted. He doesn’t look like his dad at all. In the episode, Liz doesn’t remember the roads in Andrei’s hometown. He jokes that she was always drunk. Liz cries watching the scene when he sees his mom again.

Colt and his mom watch as Colt invites over a woman, Vanessa. He recalls Jess being very jealous of her. Colt sees her as a best friend. Jess is disgusted because she knows he cheated on her with Vanessa. They watch the scenes when Vanessa learns he plans to go to Brazil. Colt thinks Vanessa is jealous. His mom agrees. He tells Vanessa how he has given Jess money. Jess disagrees, laughing.

Tania and Syngin meditate before watching the show. They watch the episode where they go out to eat after he came home tipsy from work. He was feeling a little stressed at the time. They discussed how he doesn’t know if he wants to raise kids in America. They read some tweets about how their food is getting cold. They start to argue about him feeling suffocated and how fast they married. He doesn’t know if they are soul mates. Tania doesn’t like this. He feels like to be himself he would need to be alone. She tells him he can still follow his journey married. They continue to argue.

Kalani and Asuelu watch the scene where he gets to the AirBNB and leaves. He thinks it is hard to watch. She is glad that it wasn’t haunted. That has happened to them. They laugh watching Asulue eat a lemon thinking it is orange. They read some tweets about Asuelu trying to power through the tart fruit. They begin to argue about how American women have it easy, according to Asuelu. They read more tweets, one of which jokes about him being disemboweled. They watch as Asuelu takes off with his luggage mad.