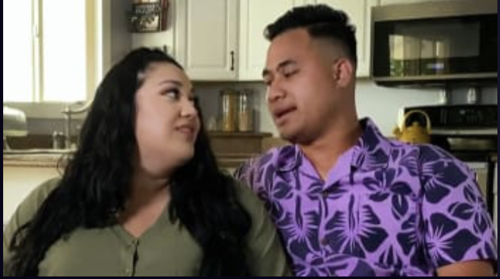 Kalani’s dad shows everyone how to braid their beards. She and Asuelu sit to watch the episode where he tells his family that he doesn’t want them to be close only when he gives them money. They read tweets poking fun at his sister about being angry that Kalani controls him because she is older.

They continue to watch as his sister gets mad that he married an American woman. Asuelu gets up and leaves in the episode, upsetting his mother. Everyone is proud that he stood up for himself.

Colt makes cupcakes for his mom and him to enjoy while they watch the episode where Colt and Jess get into a fight at the hotel. They watch as Deb expects to talk about the fight while Jess is annoyed. Also watching the episode, Jess believes she and Deb have nothing to talk about. The fight was between her and Colt. As the episode continues, Deb reflects on hoping her son wouldn’t propose as they said goodbye to her at the airport.

Andrei and Elizabeth get ready for the pizza to arrive so they can sit and watch their latest episode where they pick up her family. They laugh at Jenn giving him a hard time about his home town. They read tweets about Jenn being impossible. They continue to watch the families get together and the food his mom puts out, joking she is Martha Stewart.

Angela cooks steaks for the kids and her before she sits down to watch the episode when she and Michael meet with his aunt. They discuss his culture, their marriage, and her not being submissive. In the episode, she gets up and leaves, showing her double pack of cigarettes in her dress. Everyone laughs. She explains that she has been doing that since she was younger.

Syngin and Tania talk about their emotions and how to verbalize them to one another. They sit to watch the boy’s night out episode. Syngin’s friends tease his fat belly. They read tweets from viewers also teasing himself. In the episode, they tease him for having Tania move in as well. It was a guy’s environment. They continue to read tweets about married life. One of the tweets shows Syngin making a sour face. They both admit they could be happier.

Asuelu and Kalani watch the episode when they went to see the goats. Asuelu is confused by the farm part, thinking they are for slaughter. At the farm, one employee gets irritated with their son chasing goats. Asuelu’s mother has come with them. They get into an argument about money once again. Asuelu cries he is so irritated. Kalani points out that he is wearing 15.00 sneakers and his mom is wearing Nikes.