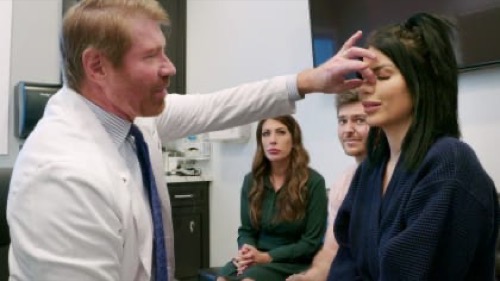 The cast were back. It was now time for them to tell their side of the story because there was a lot that wasn’t shown when their episodes first aired and there also was a lot that the cast now regrets. Thankfully, the cast has “B90 Strike Back”. “B90 Strike Back” gave them this wonderful opportunity to find out what the audience thinks about them and to answer any leftover questions on the matter at the same time. The cast therefore turned to the show to clear their names. Angela and Michael were up first. The couple is still together. They’re married now. Their time on the past season was spent arguing about whether or not they should get married and Angela quickly became known known for telling it like it is.

Angela broke up with Michael so many times that he stopped learning to fear her. The couple had a joint bachelor/bachelorette party and they got into a huge fight at the club because Michael had been paying attention to another woman. He was even using a mirror to look at another woman while his own future wife was dancing on him and so naturally Angela noticed. Angela lost it once she saw that Michael was eye-flirting with another woman. She expects her man to pay attention to her when they’re together and, truthfully, she wasn’t asking for much. Angela just wanted respect. The whole clip of what really happened hadn’t been aired at the time and so Angela was now telling the world what really happened.

Michael however was still lying. Michael claimed back then and he still claims that he hadn’t been paying attention to another woman. He said he was just looking at the floor. He completely forgets the part where he was using a mirror to keep sight of another woman and this other woman noticed that he was looking at her. She also responded by smiling at him. Michael must have noticed that if he was looking at her the entire time and so he’s lying now when he said he wasn’t flirting with anyone and his claim that he doesn’t know why Angela was so upset is also a lie. He knows why she was livid. Angela knows why she was livid. The audience now knows why she was livid and Michael should have been in the dog house for much longer for what he did.

Then there was Elizabeth and Andrei. The couple laughs at the comments they’ve been receiving because so far the comments have been supportive of them and they take jabs at her family. Elizabeth’s family was overly involved. They got into Elizabeth’s business and they constantly thought they should dictate how her marriage works. They even tried to do that same thing when Elizabeth and Andrei were getting married for the second time. The couple went to Moldova to have a second ceremony there because this would allow for Andrei’s family to finally be a part of their journey and, the whole time, Elizabeth’s family were jerks. They hated on Moldova. They called it crooked and third world country.

They hated on Moldovan culture. They made fun of the food and they even called the food “peasant food”. The same food that Andrei’s mother made for them to welcome them to the family. Elizabeth’s family were being very “Karen” in Moldova. They even came to suspect Andrei’s motives for marrying Elizabeth and they spent the whole vacation trying to prove he was somehow set on getting to America no matter what. They think Andrei left Moldova to go to Ireland as a long way trip of making it to America. When they found out that Andrei had been driven from Moldova, they went tattling to Elizabeth. Elizabeth hadn’t known that Andrei was forced to leave Moldova for his life or that he left because he had been a good cop in an overly corrupt police force.

The audience was with the couple when they saw what Elizabeth’s family did. They all said they would have beaten up their sisters if she said crap like that and Elizabeth liked what they said. She would never do it, but she liked what they said and the drama continues from there. Kalani and Asuelu had to rewatch the moment Kalani said she was done with her marriage. She had said at the time because speaking to Asuelu was often difficult. He would play on his phone or storm off if he didn’t like what he was hearing and he had done that last part just recently when Kalani decided she was done. She hated the fights. She hated how fraught the relationship was and so she said she was done out of anger. And she quickly took those words back once she thought about it.

Kalani is still with Asuelu. They went to couples counseling and that was the first time Asuelu had ever heard about a therapist. He didn’t really hear about them in Samoa. People joked that a therapist could make a killing if they went to Samoa because then they would have a hundred patients sign up automatically and so Kalani and Asuelu laughed along. They’ve made similar jokes. Kalani even said she might go back to school just to help people. All jokes aside, therapy really did help them. They’ve learned to communicate better. Tania and Syngin could probably do better themselves if they went to therapy. There was a lot that they were arguing about that seems to stem from Syngin not wanting to grow up.

People on social media often said that he didn’t really like Tania, but why couldn’t Syngin get a job and Tania was wondering the same. Tania hadn’t been able to work for a time because she had been injured in a car accident and the two of them had just gotten their new apartment. They needed to make rent. She asked her husband to go to work and he hasn’t found any. He said he’ll drift into his next job. And drifting sounded like a bad idea.