BY hellodrdavis on May 19, 2020 | Comments: Leave Comments
Related : Days of Our Lives, General Hospital, Hot News, Soap Opera, Spoiler, Television, The Bold and the Beautiful, The Young and the Restless 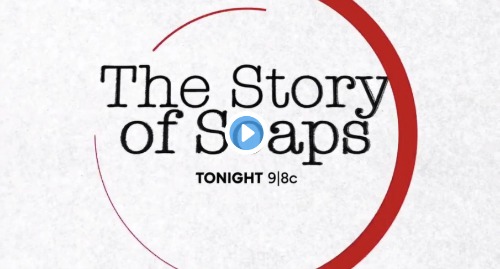 ‘The Story of Soaps’ is a major ABC event and here is an exclusive preview of what to expect. ABC and People Magazine will present a very special primetime TV event that soap fans won’t want to miss. It’s called ‘The Story of Soaps’ and it airs on Tuesday, May 19th at 8pm Eastern. The 2-hour special will feature a diverse panel of soap actors and behind-the-scenes executives, including some major stars who started their careers on soaps.

Fans of the 4 surviving daytime soap operas: Days of Our Lives, General Hospital, The Young and the Restless and The Bold and the Beautiful won’t want to miss this special TV feature! Be ready to be surprised at the variety of entertainment stars who either got their start on a soap or played on one during their careers!

‘The Story of Soaps’ will “explore how no genre of television has laid deeper roots into our cultural consciousness and serialized storytelling than the soap opera.” The special will also explore how women creators historically migrated from radio to TV to eventually become the dominant force in daytime television for over 30 years.

The special will also demonstrate how the legacy of soaps is very much alive, with elements of soap operas currently appearing in modern primetime dramas and reality shows. ‘The Story of Soaps’ will examine the genre of soaps and the cultural phenomenon that is the modern soap opera.

“The Story of Soaps” will also feature an impressive panel of experts and popular soap actors past and present. Included in the panel will be various soap creators and executive producers, writers, and consultants. These behind-the-scenes people will share their experiences in creating the dramas we know and love.

Given that soaps have been a part of daytime television for nearly 70 years, there should be plenty for the stars, writers, executive producers, directors, and creators of these amazing dramas to discuss. We look forward to watching the special, and we hope you will tune in as well! Stick with CDL for all your up-to-date soap news and spoilers!

TONIGHT: Your favorite soap stars are taking you on a walk down memory lane. Tune into #TheStoryofSoaps, premiering tonight, May 19th at 9|8c on @ABCNetwork. Don’t miss it! #GH pic.twitter.com/q42AosjYMN