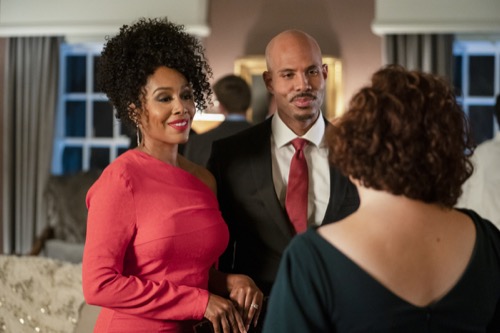 Tonight on CBS their new series All Rise airs with an all-new Monday, January 20, 2020, season 1 episode 13 called, “What the Bailiff Saw,” and we have your All Rise recap below. On tonight’s All Rise episode as per the CBS synopsis, “Lola travels to Washington, D.C., to help her husband, Robin, land an important job at the FBI.

Also, Mark and Amy Quinn’s relationship heats up as Amy tries to put together a winning defense for Vic Callan’s.”

Emily meets with Alex, a former gang member who now runs soccer games with other members for fun to show them there is more to life than colors and territories. He wants her to meet someone. Meanwhile, Lola leaves for D.C.

Emily meets with Alex’s friend, Diego, and Diego’s mother. She tells them she is assigned at arraignments. Alex and Diego’s mother start to talk about how the police are looking for him, mentioning murder as Emily’s head swirls. She tells them she hopes to be assigned to his case. She needs to go because he does not have an attorney-client privilege.

Lola arrives in D.C. to see her boyfriend who tells her all about his possible new job offer. Mark meets with his father’s lawyer who tells him they found the murder weapon, a gun, in his dad’s apartment.

Emily gets assigned to Diego’s case after calling in a favor. She arrives at court. They plan to enter a non-guilty plea. Right before the arraignment, the DA tells Emily he has video footage placing Diego at the murder scene.

Mark meets with hid father’s lawyer again. She tells him she is going to get the gun evidence thrown out on a technicality. He still has little faith in his father. Emily pleads with Alex to come with her to jail. Diego won’t talk and she needs him to or she cannot help him. They head to the jail. Diego tells them how he went with some of the guys he is in a gang with. He doesn’t want to be in a gang, he moved, tried to get out. The guys brought him out to a secluded spot. They had a guy in their trunk. They took him out with his hands tied and shot at the guy until they killed him. He did nothing. Emily thinks she can help. She can get him immunity.

Mark meets with his dad and his dad’s lawyer. His father, Vic, loses his temper when he realizes Mark thinks he may have committed the murder. He starts to scream and shout. Mark tells his lawyer that is the man he grew up with.

Lola and her boyfriend go to a work party for him. He finds out he is going to be offered the job. It’s for a year. Sh his happy and sad and has to head home already.

Emily gets a frantic call from Alex. The police are making arrests and she hasn’t even made a deal for Diego. She doesn’t know what is going on.

Back at home, Lola talks to her boyfriend. He did get the offer. She hopes he can do some of his work in L.A. He is going to talk to them about it. She tells him to take the job.

Emily asks Mark what he might know about the arrests made in Diego’s case. The DA sees her and calls her into his office. He admits he recorded their conversation in a courthouse meeting room. She calls for an emergency meeting. They all meet with Lola and argue their side. Lola calls a recess.

Lola is torn on what to do about Emily’s case. Her co-workers try to sway her with their opinions.

Mark meets with his dad’s lawyer who shares that his dad was framed. She has a witness. Mark is surprised. He texts Lola to talk. They meet up and vent about their problems.

Sara comes to see Lola about Emily’s case. She has some opinions because she grew up in a neighborhood with gangs. She starts to voice her opinions when Lola tells her to stop politely. She hears her but cannot listen further.

Mark goes to his dad’s hearing. The gun is excluded from evidence. Mark talks to his dad after. He doesn’t agree on how he has lived his life but he doesn’t think he is a murderer.

Lola rules in favor of Emily. She disagrees with recording devices being put in the court meeting rooms. Diego will be granted immunity and will be sent to live in a whole new place with his mother.

Lola calls her boyfriend and they talk about how they will make it work. They think they can do it.