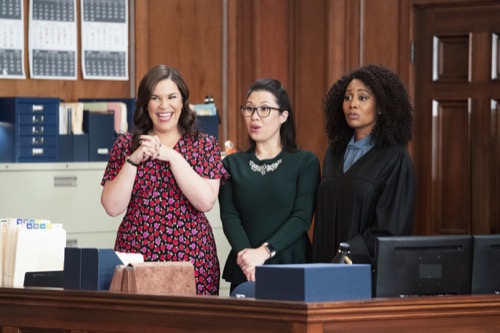 Judge Lisa Benner is running for State Attorney General. She brought in this hotshot strategist named David Sanders to run her campaign and he wanted to involve Lola. Lola was Benner’s friend. She was also a fellow judge and so she was the perfect person to go through Benner’s time at a private law firm. Benner wanted Lola to find anything that ruins her campaign. She was trusting Lola to do it because she knew she was one of Lola’s mentors and so Lola couldn’t say no. Not even if she wanted to.

Lola agreed to help Benner. She also agreed to help her former deputy Luke with his Valentine’s surprise for his girlfriend and it was called Operation Cupid. They had Emily come to a courtroom under false pretenses. She was then taken by surprise when everyone got up and they began dancing. They all danced to a lovely song that was Luke’s way of saying “Happy Valentine’s Day”. He later ended the routine by giving her her gift. The gift was goldfish because he knew she wanted a pet and was too busy to get a dog.

Luke also didn’t realize how much of a letdown this gift was because he had to rush to work. He was clerking at the District Attorney’s office and he couldn’t afford to be late on his first date. Luke went to work while Emily did her best to put her goldfish somewhere. She was more concerned about her case than her fish and so she didn’t fight it when Sherri offered to fish-sit. Emily was defending a young woman accused of breaking into her ex-boyfriend’s place and trashing it. The couple had recently broken up. The defendant wanted her vinyl back and so she used her key for the apartment.

She was also still on the lease. Emily used that in court to justify her client’s entry into the apartment and she angered the ex-boyfriend. She upset him so much that he chose to strike out at his ex-girlfriend by emailing everyone in her contacts some old nudes she had set him at the start of their relationship. Her reputation and her career were now on the line. She went to Emily and Emily got the DA to lower the charges. Her client doesn’t have to go to jail now. Emily wished she could have done something about Walter Farley as well, but there wasn’t anything she could do.

She couldn’t stop him from being a jerk. Her client was still fired from her work and so Laura confessed to Emily how she thought she got out. She was in a bad situation with Walter. He was abusive and she thought she had gotten away. She talked about it with Emily. Emily made sure that Laura had told friends and family and she also asked Laura to go to the police. Laura wasn’t willing to go that far. She didn’t want to go to the police or anything like that and so she wanted to drop it. She didn’t want to anger him any further.

It was Emily that refused to let it go. She was reminded of how things were with Joe and so she wanted justice for Laura because she never got that for herself. Emily pursued possible charges against Walter. She asked Luke for his advice and he got his new coworker to help. Emily also tried getting help from Lola. Lola had some concerns about Emily being too close to the case. She questioned Emily and Emily snapped at her. And so that sort of proved the point that Lola was making.

Lola also did her friend a favor. She looked into Benner’s past and she found evidence that Benner covered for a big drug company. It wasn’t illegal or anything like that. What Benner did was perfectly acceptable for any lawyer and so really she just did her job. Lola still respected her friend. She just needed more information and she was going to keep on digging. Lola told her best friend Mark what was happening and he told her and they shared problems. She was missing her husband and he was dating Amy Quinn which was hard because they faced off against each other for the first time since sleeping together.

It weird at first. Then they both got over it and they spent the rest of Valentine’s together. Lola meanwhile opened a gift from her husband that he asked her to open when she was alone. She did and then she laughed. It must have been a funny gift. Lola enjoyed it for a short time and afterward she return to digging into Benner’s past.

Emily in the meantime talked to her client and she later convinced Laura to go to the police about Walter.

Doing that for another woman had helped Emily to deal with her own past and so she eventually let Luke in on what was going on.

And they were just there for each other.