All Rise Winter Premiere Recap 01/06/20: Season 1 Episode 12 “What The Constitution Greens To Me” 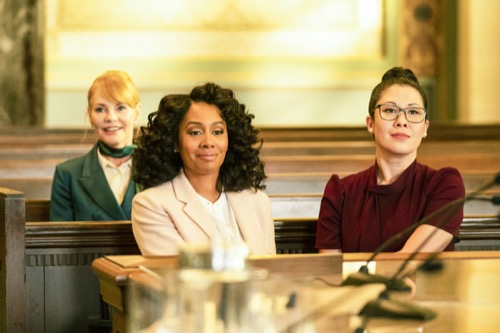 Tonight on CBS their new series All Rise airs with an all-new Monday, January 6, 2020, season 1 episode 12 called, “What The Constitution Greens To Me,” and we have your All Rise recap below. On tonight’s All Rise Winter Premiere episode as per the CBS synopsis, “Following her battle with the Commission of Judicial Performance, Lola questions her own brand of creative justice.

And when Benner assigns Lola a politically charged eco-terrorism trial that involves a senator’s son, once again, Lola realizes she must trust her instincts in order to succeed.”

Lola and Mark have lunch. He talks about his father’s murder trial while she talks about getting into the inner circle of her peers. She needs to get into the Literacy Gala because all of the other judges are going.

Emily meets with her client, Jeremy, a young man who is in trouble for sabotaging valves at an oil refinery. Lola will be the judge on the case. Benner tells her she is friends with the young man’s mother, a congresswoman, making Lola feel the pressure.

Mark meets with a new father Niles who lost his wife. She complained about chest pains to her doctor but he neglected her. Mark is going to go after the doctor. Outside the courtroom, Mark sees a lawyer involved with his dad’s case.

Lola sees another judge in the break room and asks for advice on her new case. He invites her to be his guest at the gala.

Mark’s day in court doesn’t go well, making the father Niles emotional. He knows the doctor who cared for his wife was racist and withheld adequate, quality care. Meanwhile, Lola listens to the case of Jeremy.

Luke brings Emily to the beach. He wants to forget about work. Meanwhile, Mark meets up with a guy who knew his dad at a local bar to get his information.

Lola talks to Judge Campbell at the gala when the congresswoman arrives. She wants to tell Lola all about her family but Lola tells her they cannot talk. The next day, Lola confides in Mark about what happened.

In court, Mark crosses exams, several women, in regards to the doctor and a woman who worked under the doctor. Lola talks to Campbell. Did he ambush her?

Lola confronts Benner, asking her if she thinks she is going to give her friend leniency. Is that why she was assigned the case? Benner tells her, it is because she is honest and fair.

Niles takes the stand to talk about his wife. The doctor is then called to the stand. Mark cross-examines him, asking him why he ignored his patient’s request to run additional tests. He shares that he made a mistake. But he should still be able to practice.

Emily meets with her client who finally shares that he blackmailed because of his mother. If he didn’t sabotage the refinery then they would share that his congresswoman mother has bipolar. The congresswoman takes the stand instead to share this.

Mark gives his closing statement, pushing for the doctor to be found guilty in the death of Nile’s wife.

Mark meets with his father. He is angry that he is in this situation and begs him to take responsibility. His dad tells him he didn’t do anything.

In court, the doctor is found not guilty. Mark apologizes to his client. Later, Mark tells Lola about how he lost and let his client down.

Lola finds her client guilty but reduces his charges due to the fact that he was blackmailed. The family is thrilled.

Mark’s client holds a press conference on unconscious and conscience racial biased. Lola and Mark meet up to talk about their days and their cases. They toast.