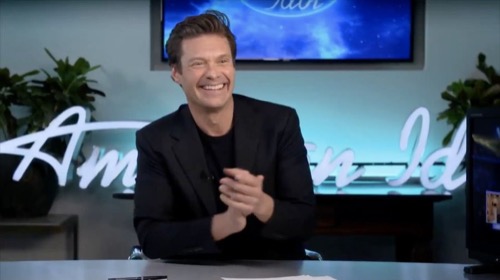 It’s another exciting night of American Idol on ABC tonight with an all-new Sunday, May 17, 2020, season 18 episode 16 called “On With The Show – TGrand Finale” and we have your weekly American Idol recap below. On tonight’s American Idol season 18 episode 16 as per the ABC synopsis, “Kicking off the finale event following America’s last nationwide vote, the road comes to an end for two contestants in the Top 5 reveal. The Top 5 will then each perform two songs as they fight to win the coveted “American Idol” title.

The first song will celebrate their induction into the Top 5, and the second will be a previously performed song and their new official “American Idol” single. Next, the next singing sensation is crowned in the season finale.”

Who will be crowned the next American Idol? The Top Seven came together for the biggest moment of their lives and they began the night with two eliminations. Only five of them were going to move on to the Grand Finale. Two of them had to be eliminated and unfortunately, it was both Julia Gargano and Louis Knight. They said their final goodbyes. They also wished the rest of the contestants good luck and so the show moved on with Dillion James, Johnny West, Francesco Martin, Arthur Gunn, and Just Sam. They were the Final Five. They made it this far in spite of a pandemic and they each showed amazing talent.

The contestants were asked to put that same talent on display tonight. They were asked to perform a song they couldn’t wait to sing at the end of this pandemic and so most of the choices were about hope. Dillion James was the first to perform tonight. He performed the song “Change the World” with his country twang and it was one of his best performances to date. He was really feeling the song. He was also comfortable and so he’s come a long way from that troubled kid. Dillion had gotten involved in alcohol and drugs. He was even depressed for a long time. He knowingly took part in dangerous behavior because he hadn’t cared if he lived or died and thankfully he’s better now.

Francesco went next. He was a judges’ favorite from his first performance. At the time he had been so nervous that he had been visible shaking and so its good to see him in his element tonight. His nerves were better with him performing from home. Francesco was able to give more to his performances and he later performed Harry Styles’s “Adore You”. It was a great song selection for him. He played it rather well and the judges had liked it. They’ve long known that he would make it to the final five and Luke had even believed Francesco would win this season. And so now he just has to show it.

Up next was Just Sam. Her journey has been extraordinary. She started the show wanting to prove to her grandmother that women that look like them could make it far on the show and that’s exactly what she did. Just Sam went from singing on the subway to performing in LA. For tonight, she performed “Stronger (What Doesn’t Kill You)” by Kelly Clarkson. Just Sam as anyone watching can tell was confident and showing more of her personality. She used to be shy onstage. She’s now showing some sass and the judges loved to see it. They love Just Sam. They also noticed her transformation on stage and they loved that too.

The contestants have all done up their homes. They’ve added twinkling lights and Dillion even had some candles and so they were really doing well with being at home. Arthur Gunn ended up going next. He performed “I Don’t Want To Be” by Gavin DeGraw and he was great. He too added lighting to his background. He also played with his stage. He moved around and he gave his rocker vibe like usual. Arthur was a great musician. He always makes sure he’s a great musician and so the judges have never seen him floundered. Not really. Arthur gave another great performance and hopefully, America votes for while they still have time.

Johnny West went next. He was the silent type. He wouldn’t necessarily talk much or promote himself and yet he’d always give a stellar performance. He performed “You Can’t Keep A Good Man Down” tonight. He accompanied himself on the keyboard and he tends to do that because he liked hiding behind it. He felt more comfortable if he was behind a keyboard. So, the judges just let him be. They respect him for the artist he is and they never want to be someone he isn’t. Johnny still gave a great performance. He just needed to work on his onstage persona. The first performances of the night were what the contestants wanted to see when this pandemic was over, but their second song was a repeat performance.

The contestants had to repeat a song they’ve done before. Dillion repeated the Bob Dylan song and he even changed his background. Before he was over by the pool. His second performance was in front of the fire pit and so he was enjoying himself with this. He liked setting up the stage. He liked arranging background and his being more comfortable led to a stronger performance. His second time with this song was stronger than before. His voice had more grit and he knew when to relax into the song and when to give it more “oomph”. And so once again he kicked off the ground with his amazing voice.

Francesco went next. He chose to repeat the song “Alaska” and he’s changed so much since he first performed this song. Again, he was such a nervous wreck back then. Francesco had almost gotten sent home one time because his nerves got the better of him and he had messed up his duet. His friend had covered for him at the time. Francesco was able to move on to the next round because of him and thanks to Louis he’s singing in the Grand Finale tonight. Francesco was able to bounce back. He gained some confidence and that’s what was on display. He confidently sang “Alaska”. He also dedicated this performance to his teachers and boy were they proud.

Just Sam went next. She repeated the fan-favorite “Rise Up”. She was advised by Bobby that she needed to give another heartfelt performance to win and that’s what she did. Just Sam has been giving her everything to her performance since she first told her story. She didn’t have much growing up and receiving praise now still came as a shock to her. Except she has such a beautiful voice. She just has to trust in it more and it was clear she was doing so with her performance tonight. Just Sam was receiving a lot of praise from the judges and Bobby even said this season has been the best season of the show so far.

Bobby has never seen as much of tremendous talent as he has on this season. He and the others called Arthur a true virtuoso and that’s because he was. Arthur performed “Have You Ever Seen the Rain” tonight. It’s the third time he’s performed this song and its the third rendition. Arthur can turn any song in his own. He was literally done so with this one song so many times that it sounds different every time he plays it. Arthur was unmatched in this competition. His talent was in a league of its own and the closest singer/songwriter he has is Johnny West. And that man is still working on his confidence.

Johnny went next. He was once again behind that keyboard and this time he repeated the song “Makin Love”. This song was good for him. He got to come out of his comfort zone and throw in some rapping. He gave the final performance of the night and it had been good, but was it good enough? The voting closed not long after Johnny’s performance and the show looked bad on its season. It had been an interesting couple of weeks with this show. They began like every other year and then this pandemic happened. No one had known at the time that they would still be in lockdown or that they would have to do the show from the comfort of their homes.

Yet, here we are. Luke soon gave a performance himself and so the judges got in on this performing from home. The judges also reached out to several contestants that have been eliminated. Luke got to talk to Doug Kiker who repeated his Rascal Flats performance as an intro to the band playing and surprisingly he did so with new teeth.

He must have gotten the work done after he had been eliminated because now he has a row of full teeth. Which he didn’t have before and so it was quite a shocker to see. Then there was the performance with Lauren Daigle. She got to sing with Just Sam who she was a big fan of and it had led to a great performance.

Katy Perry also got to perform. She did a whole thing with a green screen and so her performance was by far the best the most entertaining. Then there was an Aretha Franklin tribute with Cynthia Erivo leading the way and former contestants coming back to sing several parts. And later Ryan finally got around to revealing the Top Two!

The Top Two were Arthur Gunn and Just Sam.

And ultimately the winner of American Idol turned out to be Just Sam.

She’ll be releasing an album soon and so keep watch!