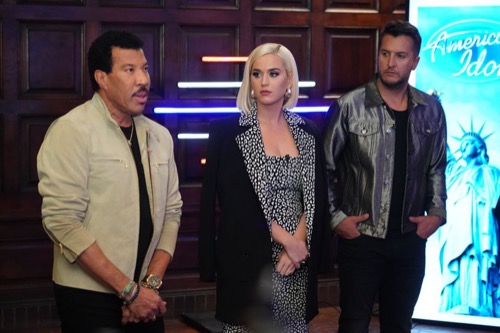 It’s another exciting night of American Idol on ABC tonight with an all-new Sunday, March 23, 2020, season 18 episode 8 called “Hollywood Weeks – Solos” and we have your weekly American Idol recap below. On tonight’s American Idol season 18 episode 8 as per the ABC synopsis, “Hopefuls battle it out with solo performances, showcasing their unique voices and star power in hope of advancing to the next round of the competition.”

It’s the Final Round in Hollywood. The contestants were going to have a solo performance in which they must convince the judges they deserve to stay. This round was special because it showed if the contestants could live up to being artists and so as a little surprise for them Ryan brought back Alejandro. Alejandro dominated this round last year. He performed an original song and it propelled him to Finals. Alejandro to discuss this moment. He told them how nervous he was and he advised them to all push through their own nerves so that they too could get to the live shows.

Up first was Kimmy Gabriela. She started out strong in this competition. She had a great audition and the judges had referred to her as a star even back then. Kimmy went on to struggle during duets. Her duet wasn’t as strong as the judges would have liked and so she had scraped by. Kimmy came out tonight ready to redeem herself from her last performance. She gave it her all and Katy Perry had given her a standing ovation. That was a good sign. Kimmy thought it showed she was better this time and so she was hoping that would remind them that she was still a star.

Next was Genevieve Linkowski. She was a familiar face because she’s been on Idol before and she hadn’t made it far at the time. But things were much different now. Genevieve has grown as an artist and losing her sister as she had matured her. She was a stronger singer this time. She put more in her performance than she did before and her performance tonight had won some “wows” from the judges. They just kept repeating that word as Genevieve performed. She had impressed them.

Jovin Webb went next. His week in Hollywood has gone smoothly. He stood out in his Genre and he also had a great duet which not many could claim this year. Jovin was also familiar with playing with a band. He did this back home and so having a band for tonight’s performance hadn’t fazed him. Jovin once again stood out as a strong contestant. Perrin York was the same. She wasn’t used to a band and yet she performed with them fairly well. She did a risky song. It had worked out for her and so she made the right decision.

Jeb “Unpronounceable Last Name Here” had chosen an easier song. He played it safe and there was nothing wrong with that. It could still work out for him. Arthur Gunn went next. He wanted to perform the same song he auditioned with because he wanted to show how far he’s come and he even rearranged it. He tried to get the band on board. Only it was hard for them to pick up his rearrangement in such a short time and so Arthur had to forget the band. He went out with just his guitar and he later managed to make Lionel cry with happiness.

Robert Taylor went next. He recently lost his best friend in the competition because the duet they performed together hadn’t been strong enough and his friend was eliminated. Robert was also still in mourning because of that. His performance tonight hadn’t been as great as normally would expect from him. Robert was lackluster. The judges noted and it doesn’t seem like they’ll be forgiving this time. Robert wasn’t the only one to mess up. There were several contestants that bombed tonight. They all didn’t have the same excuse as Robert did and so it just wasn’t their night.

Next up was Lauren Mascitti. She had a very special guest there tonight. She brought her grandmother with her. Her grandmother is known as “Nan” and she’s always been supportive of Lauren’s career. She even has videos from when Lauren was small and they showed how much Lauren loved performing. Lauren latest performance was with the song “God Made A Woman”. It had been such a great song for her that she deserves credit for picking it and she also received a rare standing ovation from the judges.

Sophia Wackerman and Sarah Isen went next. They were roommates and they became best friends on the show. They’ve already experienced their one strike with their duets. It had been really bad that they even knew it was bad and so they couldn’t afford to mess up again. Sophia went first. She had a strong performance and sadly Sara’s performance didn’t hold up as well. Sarah had sounded tired. It was like her voice had given up. The ladies didn’t want to be separated, but tonight’s performances didn’t match up.

Kat Luna went next. She was performing for the first time without her boyfriend being in the competition as well. He was eliminated yesterday after they duet failed to impress the judges. He, therefore, left the “show” even if he was there tonight. He came out to support her and Kat dedicated her performance to him. Except it could have gone better for her. Just Sam went on. She wasn’t feeling well. She had a sore throat and was feeling nauseous. She could barely talk much less sing and under different circumstances, people would ask if she had COVID 19.

Just Sam managed to overcome her sickness. She pushed through it and she gave a strong performance despite feeling so unwell. Just Sam might receive extra credit for that, too. Up next was Marcus Tinsley. He actually had to start over his performance because he didn’t know the words and so he chose a bad time to make a mistake. He should have chosen something he was more familiar with because now all anyone would remember is the part where he messed up. And the judges ran into several cases of people cracking under pressure.

At one point, the judges asked why were people doing this to themselves. They were giving bad performances one after another. The problems seem to be everyone was trying to reach those high notes that they’ve never tried before and their failure to get there had freaked out the judges. They likened what they heard to hissing sounds. Then there was Makalya Brownlee. She went out onstage and before she could sing the first note she began feeling unwell. She tried going backstage and eventually she had needed to be laid out on the floor because she was that out of it.

Makayla has a heart condition. It means she reacts differently to stress and this competition has been stressful. Makayla had felt embarrassed about it afterward. She had needed an ambulance and she was receiving treatment when Camryn Leigh Smith had her turn on the stage. Camryn’s performance tonight had been different. She was used to giving these sad love songs and so she mixed things up. She performed a powerhouse song. She wanted to prove she could do it and she did.

Devon Alexander also went. He did okay and then Lauren Spencer-Smith had her turn. There were several contestants that went as the judges waited to hear back about Makayla. She eventually returned to the stage later on. Makayla still delivered a strong performance despite the setback and so she showed resilience. Next up was Dillon James. He performed an original song. He had moved to Hollywood a couple of years ago and he had gotten involved with alcohol and drugs. Dillon has been clean for two years. His original song was about his struggle with substances and it was very him.

Louis Knight went next. He came to this competition with an original song that he did in honor of his friend who had committed suicide and he quickly won over fans. Louis is English. His accent is very cute and some considered him cute as well. So, Louis was pretty safe. It also didn’t hurt that he still sounded great in spite of how tired his voice was and so again he’s safe. Up next was Cyniah Elise. She chose a Whitney song that was very popular this year and so they each tried to do a different spin.

Geena had picked the same song. She and YZThasinger did it the same way. The last person to perform this song had also threw in some dancing to standing out and so there was a lot the contestants could do with one song. Makayla Phillips went next. She chose something different. She went with an R&B song when she usually does ballads and so Makayla performed “Cause I Love You” by Lizzo. It was a fun song. Makayla chose because she wanted to have some fun out on stage and it was the worse song she could have picked. The judges hated it for her.

They hated the performance as well. Makayla was usually a stronger singer and what happened tonight had been a disappointment. Margie Mays went next. She was another familiar face because she had been on the show last season and she had been sent home before her time. Margie back this year with her boyfriend. They did a duet together that hadn’t been great and so they were both advised to branch out on their own. And that’s what the Solo Round is. It’s a time for them to shine on their own.

Margie did a song about being left behind. She revealed that was one of her biggest fears. She felt that her boyfriend would go further in the competition and she would be left behind. Margie didn’t want that to happen. She did what was best for her boyfriend Johnny West and yet she wanted that for herself as well. Margie gave a good performance. She showed how much she’s improved over this season and the judges took note of that. The judges also liked Johnny. He was a great singer/songwriter and the judges were looking for that this season.

The judges later went over everyone’s performance. They deliberated and went and back and forth over who they should let in the top 40. But ultimately they separated the contestant’s several rooms and they told everyone in Room 1 that they made it.

Everyone in Room 2 did not!

Everyone in Room 3, however, did make it.