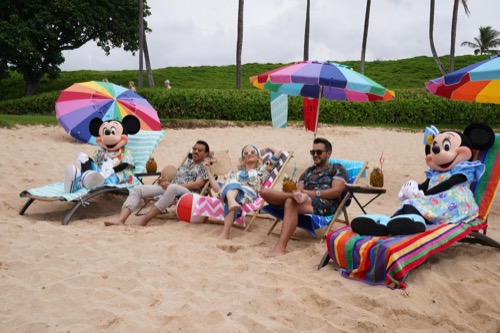 “American Idol” went to Hawaii. Hawaii is where the top forty contestants will hold their showcase. This is their last chance to impress the judges and needed it more than ever because Hawaii is also where the final judgment will take place. The judges were going to decide who would make it to America’s Vote. They first watched the contestants’ showcase to get a feel for them and so up first was Nick Merico. He and Lionel had bumped heads in the beginning. Lionel didn’t like Nick’s attitude and he didn’t think Nick deserved to make it to America’s Vote. And so Nick has been doing his best to prove himself since his first audition.

Nick managed to make it to the Top 40! He told Lionel that took the man’s criticism to heart. He knows that he needed to work on himself. He said he wasn’t afraid to do so. His showcase also was very good. He performed “When I Was Your Man” before a crowd. The crowd had liked it. They especially enjoyed his falsetto and so Nick later made it to the Top 20. Next up was Makayla Brownlee. Her road to this point hasn’t been easy. She suffers from seizure and she had one right before her solo performance in Hollywood Week. Makayla was able to recover quickly. She got back on her feet and she gave a truly great performance.

The judges had admired her strength at the time. They were rooting for her and so her showcase was an important one. The judges wanted to see if they were right about Makayla. Makayla performed “More Hearts Than Mine”. The song wasn’t one the crowd knew. She also did a lot to change it up and so one of the judges didn’t really like that. Luke felt the song was so hot right now that she could have sung like the original and more people would have followed it. The crowd mostly enjoyed her vibe rather than the song. The judges took notice of that and unfortunately they decided to cut Makayla.

Makayla can always come back next year if she wants. Next up was Dewayne Crocker Jr. He enjoyed himself in Hawaii. He hung out with three generations of his family and he had a good time like many of the other contestants there. He later “Old Town Road” at his showcase. He came in wearing a cowboy hat and so he had the whole look for country music. Even if he didn’t start out as a country musician. He was also a great performer. He knew how to get the crowd going and he kept everyone dancing with him. There weren’t many contestants that could accomplish that. Dewayne was a rare gem and so the judges kept him for the Top 20.

Camryn Leigh Smith went next. She struggled during Hollywood Week. She was used to performing in church and the national anthem and so Hollywood Week pushed her out of her comfort zone. She was forced to become a performer. She did gain some confidence back then and she came out with the song “Break Every Chain” for her performance. But the judge didn’t see much growth. They also didn’t really hear the song because Camryn wasn’t that clear and so sadly they had to cut Camryn. She can try-out for next year. Next up was Devon Alexander. He performed “Tell Me You Love Me” and his performance was another fun one.

Devon had a great time on stage. He was relaxed and he knew how to play to the crowd. Both of which should have gained him brownie points with the judges. There was also Jordan Jones. He performed “Redbone” and he was a great onstage. He got the crowd dancing with him and he even shook some hands while he was at it. Geena went next after him. She performed Bruno Mars’s “Finesse” and she was a riot on stage. Her onstage presence was great and so it was sad that Geena, Devon, and Jordan were all cut from the Top 20. The judges were looking for perfection. They weren’t going to be happy until the contestants hit every note just right and so many were sent home.

Up next was Louis Knight. He auditioned with an original song that he wrote after his friend committed suicide. It had been a nice personal touch and it showed the judges who he is as an artist. Louis also did great during Hollywood Week. He managed to carry his duet performance and the judges have never forgotten that. His performance of “Castle On the Hill” on the other hand wasn’t his best performance. The judges felt he got caught up in his own head and even Louis realized he could have done better. He second-guessed himself the whole way to meeting with the judges for the final judgment.

The judges told them him they loved him. They look back at his audition with fondness and then they said the word “but”. They loved him but his performance was poor. Louis was expecting to be cut when they said that and they later surprised when they told him he made it to the Top 20. Louis won his place based on past performance. The judges knew what he was capable of and they pushed him through on the chance they might see it again. His friend Francisco Martin went next. Francisco mentioned the falling out he had with his family and his friends. He wanted to apologize to them in some way and so he chose his song to do it.

Francisco performed “Falling”. He went out on stage with his guitar and this time he didn’t let his nerves rule him. Francisco has gained some confidence since the judges last saw him. He was vibrant onstage and the judges finally got to see the Francisco they always knew was there. Francisco made it into the Top 20. Next up was Jovin Webb. He was a judges’ favorite. Lionel once said he brought the BBQ sauce to the competition. Jovin was known for his deep and unique voice. He later performed “You Are The Best Thing” and it hadn’t been one of his finest. His voice hadn’t hit every note.

There were some gaps. The judges spotted them and they weighed that against Jovin’s talent. Again, his voice was unique. The judges didn’t want to lose that and so they pushed him through to the Top 20. His duet partner Faith Becnel went next. She had a rough start. Her audition was stopped midway because the judges found it too choppy and so she had to start over again. Faith managed to make it through back then. She’s been trying to stay afloat ever since and her showcase hadn’t been perfect. The judges didn’t consider a step forward for her. They more or less sent her through because of her personality and so now she has to up her game.

Next up was Amber Fiedler. No one has experienced half of what Amber has. She auditioned when she was heavily pregnant and she’s since given birth as well as put the baby up for adoption. Amber has been through a lot. Her Hollywood Week was also a struggle. She was almost cut after her duet and so she needed tonight to be perfect. She performed the song “Good Kisser”. She was strong during the chorus. She wasn’t that great in other parts of the song and so the judges went on to cut her. Just Sam went next. She went from the projects and singing on the train to the beaches of Hawaii.

Just Sam was stunned by how far she made it in the competition. She couldn’t wait to make her family and friends proud. Just Sam took a huge risk with her showcase. She performed a Selena son in a foreign language and it had been amazing. The crowd had loved it. The judges had loved it and surprisingly Just Sam revealed while she is Spanish, she doesn’t actually speak Spanish. Just Sam made it into the Top 20 with her performance. She later called her grandmother to celebrate and even Ryan got on the phone. Everyone was just so happy for Just Sam. She earned her place in the live shows.

Up next was Johnny West. He auditioned with his girlfriend and returning contestant Margie Mays. She was sadly eliminated after Hollywood Week though she told Johnny how much she believed in him and she told him to go after his dream. She didn’t want him to give up just because she wasn’t there. Margie wanted what was best for him and so Johnny tried to move on without her. He tried to look after himself. Only self-doubt kicked in without Margie there. He came to doubt whether he was good enough and he even compared himself to other contestants which were the worst thing he could do.

Johnny performed “You Found Me”. He performed it while on the keyboard and it had been one of his best performances. Johnny would later he got out of his own head because he wanted to show his family they had been right about him. They came there to support him and he still had Margie. She told him how good he was. She helped him shake off his nerves and he made it into the Top 20. Next up was Dillon James. He was a young man known for his cowboy hat. He would usually be found in one and yet tonight he changed his hats. He put on regular hat. It had looked a little strange to see him and so thankfully he went back to cowboy hats.

Dillon performed “The Times Are A-Changin”. He said it was the right song for this moment in time and it had been great for him, but no one will know his fate until the next episode of “American Idol”.