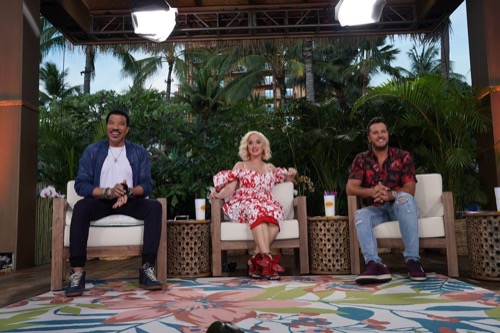 It’s another exciting night of American Idol on ABC tonight with an all-new Sunday, April 5, 2020, season 18 episode 10 called “Hawaii Showcase and Final Judgement Part 2” and we have your weekly American Idol recap below. On tonight’s American Idol season 18 episode 9 as per the ABC synopsis, “The top 40 contestants take to the beach and perform solo in front of a live audience in Ko Olina, Hawaii. The judges sit down with each contestant to reveal their fate.”

The judges were last seen with Dillon James. He performed a Bob Dylan song for his showcase. It had been a good fit for him and so he waited to hear from the judges to see if it had been good enough. Dillon almost had success several years ago. He pursued a career in Hollywood and he let drugs and depression get in the way of his dream. He ended up going back home where he got clean. He was back now to finish what he started and the judges dragged the decision out, but they ultimately told him that he made it into the Top 20. He joins eight others and now they’re just eleven spots open.

The next contestant was Genevieve Linkowski. She was back from losing out on last season of the show and she’s grown as an artist since then. Genevieve has been through a lot. She’s lost her sister who was also her best friend. She’s now channeling all that pain and grief into her music. It has been great for her in terms of healing as well as being on the show. Genevieve has never sounded better. She’s also been doing really well on this season and so her showcase had been a let-down. Her voice wasn’t as strong as it normally was. She also failed to make a connection with the audience and so sadly she wasn’t joining the others in the Top 20. Genevieve was eliminated.

Next up was Franklin Boone. He was a music teacher and so he was used to helping kids reach their musical potential. He never once thought about going after his own dream until he was convinced to try out for “American Idol”. He later performed “Daughters” at his showcase. He played it in honor of his own daughter. He had actually sung this song a night before he found out he was going to be a father and so his emotional connection to this song was really helped sell it. Franklin knew what he was doing onstage. He has a level of professionalism that is unmatched and his showcase stood out because of it. Franklin was sent through and he’s now a part of the Top 20.

Julia Gargano went next. She wowed the judges with her original song at auditions and Katy Perry had even hugged her. Julia said she was going to cherish the memory of that for the rest of her life. She was already planning on telling her grandchildren all about it and truly her time on this season has been a dream come true for her. She’s enjoyed every minute of it. She’s also enjoying Hawaii while she was there and so Julia took that positive attitude to her showcase. She performed a song by P!nk. Her voice had sounded rough towards the end, but it didn’t take away from her performance and so the judges put her through.

Up next was Aliana Jester. She’s been a nervous wreck since the first moment she met the judges. She had come with a support animal for her audition because she had been that nervous and it’s worse once she didn’t have her dad. Her dad was her biggest supporter. They have a very close relationship and so it hard on her to be separated from him. She had been feeling homesick without him. Her dad later surprised her by coming out to Hawaii and so that helped her regain her confidence. Aliana performed “This Is Me” for her showcase. It had been another great performance from her and she was put through to the Top 20.

Sophia Wackerman went next. She was a judges’ favorite. She’s been a favorite since her audition because she had blown everyone away at the time and she was especially known because of her last name. Her last name was unusual. The judges had even tried to change it at one point and so they also remember her because of that. Sophia was a very talented young woman. She did amazing during Hollywood Week. She also did great for her showcase. She made the showcase feel like it was her own personal concert and the judges applauded her because of it. They love Sophia. She was an easy choice for the Top 20.

Aunty Nettie came back this season. She blessed every one of the contestants and Robert Taylor took it to heart. He personally believes that his late father is his guardian angel. His father passed away less than a year ago and one of the last things he told Robert was to be his true self. Robert is gay. He had difficulties with admitting that to himself because not everyone accepted him as he was and so he struggled with living with his father’s advice. Now, that he’s fully embraced it, he doesn’t wish to turn back. He chose to ignore the judges’ advice about reigning in his voice and he went all out like usual. And it hadn’t been great, so he was sadly eliminated tonight.

Kimmy Gabriella went next. She came from a musical family and her father was actually a performer. He’s been helping her this season. He’s been giving her advice and being super supportive of her. Kimmy later performed “You Don’t Do It For Me Anymore”. She had had some problems during practice because she kept messing up and so she had been worried about her showcase. She had doubts. She also had the judges playing on those doubts because they told her it wasn’t enough to be a good singer and so she thought she was going home. She thought this was the end of it when really it was just the judges pulling her strings.

Kimmy was put through to the Top 20. She had nothing to worry about and the judges had merely been messing with her. The judges did that from time to time. They also sent several notable people home this season. Not everyone’s showcase was shown and so the audience had to take the judges’ word for what they said about contestants and it was like that for a while until Shannon Gibbons went. She performed “Send My Love to Your New Lover”. Her voice even sounded a little like Adele’s and so it had been a great choice for her. Her voice sounded nice. She just didn’t really throw much into her performance per se. It was lacking and the judges eliminated her because of it.

Cynthia Elise went next. She’s been singing since she was two years old and so she relaxed upon making it to Hawaii. She hung out with the other teenagers. They all got matching rings and they also enjoyed the Disney Experience in Hawaii. They loved it there. They never wanted to leave and so they all tried to do their best with their showcase. Cynthia was the first one of the bunch to go. She performed “Lady Marmalade” and it was fun and energetic. Next up was Makayla Phillips. She was another teenager and she too had fun with her performance. She performed “Sorry Not Sorry”. She played to the crowd and she just enjoyed her moment onstage.

Lauren Spencer-Smith went next. She performed “Respect”. She displayed the “IT” factor and for that, she was pushed through to the Top 20. She was joined by Makayla Phillips and Cyniah Elise. The young girls were doing great this season. Up next was Olivia Ximines. She performed “Proud Mary” and she made sure to practice her dance moves. She practiced with Bobby. He wasn’t as good as she was and so they laughed about it. But Olivia did great with her performance. She even threw in a shimmering dress for added effect and it worked. Olivia made it to the Top 20. And seats were filling up fast.

Arthur Gunn went next. He was another favorite. He quickly won over the judges with his audition and he even performed the same song again albeit in a different note for his solo performance during Hollywood Week. Arthur was a nervous type. He used to perform with his eyes closed. He also didn’t seem the type to put together top-notch performances and yet he did so every time. He performed a Bob Marley song for his showcase. He was amazing as always and the judges gave him a standing ovation. They loved him. They loved his performance and he was put through to the Top 20.

Next up was Demi Rae. She was a nervous person as well. She has self-esteem issues because she doesn’t look like the type of woman that’s out there performing and so for a while, she let that stop her from pursuing her dream. She was only able to overcome that mentality because of the love and support she received from her family and friends. She later performed “Lonely” for her showcase. It had been a wonderful performance from her and sadly it wasn’t enough for the judges. They eliminated her. The judges were saving their last spots. And so the last two to receive Final Judgement had gone in together to meet with the judges.

Lauren Mascitti and Grace Leer went to see the judges together. Both of them were amazing country singers and they each did well at their showcases. Grace performed “You Make Me Feel (Like A Natural Woman)”. She had the audience in her palm from the very beginning of the song and she held onto them throughout the entire performance. Then there was Lauren’s performance. It was fast and good. She performed “Two More Bottles of Wine”. She had people dancing to the tune of the song and so both performances were great, but the judges only had one seat left and they couldn’t make a decision.

And so the judges decided to let America decide.