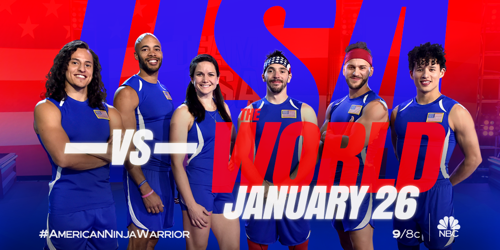 The teams will compete across all four epic stages of the show’s national finals course – 23 obstacles in all in this one-a-of-kind global TV event.”

It’s the annual battle for worldwide ninja supremacy. Its USA vs the World, people! This special international competition happens once a year and only the best compete. First up was Stage 1. There are four stages in the competition and the ninjas will be scored for how far they make it on the course. Olivia Vivian representing Team Australia was the first ninja to take this new course on a spin. She was considered one of the leading female ninjas in the world and she’s known to put on a show. She definitely did just that when she made it up the Warped Wall. And she even flexed a bit when she became the fifth woman to ever finish Stage 1.

It was a great start for Team Australia. Next up was Thomas Hubener from Team Europe. He was a Cirque du Soleil performer originally from France and he made it to Stage 4 in the past, but this time, he wiped out on the Jumping Spider and there go his chances. It was a disappointing end for the Frenchman even if it wasn’t the end of the night. Michael Torres went next. He was representing Team USA after a stellar year in 2019. Torres was a fresh face on the team this year and some would think he had a lot to prove. And if that’s the case, he ended up proving he deserved to be there.

Torres was the fastest on the course. He beat Team Australia’s time and he put Team USA in the lead. Unfortunately, Team Europe was shut out because of a certain fall, so it became even more important for all of them to do better going forward. Next from Team Europe was Steffi Noppinger. She was from Austria and she was a competitive skier. She also had a gymnastic background and so it again was a disappointment when she too fell. Team Europe was off to a bad start and there just didn’t seem any hope for them.

Maybe this is why they should have at least brought back some veterans. It was all new faces and new to the course so there was bound to a few falls. Next from Team USA was Adam Rayl. He was new to the team as well and he also had a gymnast background. All that energy had to go someplace and his family was proud it went into ANW. Adam had an impressive run and he finished Stage 1 with one of the fastest times to date. And so the ball was in Team Australia’s court when they went next.

They had to beat Team USA’s time in order to get first place. They missed their chance last time because their ninja was flexing and so they couldn’t afford to do it now. Josh O’Sullivan from Team Australia went next. This is the same man that spent three weeks in a coma and so everyone hoped he could pull off a second miracle, but it just wasn’t meant to be. He fell as well and so that clearly put Team USA in the lead. They had four points from their two ninjas from before and it was up to this third heat to change everything.

Representing Team Europe, Kesu Ahmed went next. He was from Romania and he was actually a musician. He was a star back home and he says that he hears the beats whenever he’s on the ninja course, but the beats must have failed him this time because he fell as well. Team Europe was three for three in falling. Except they got lucky this last time. They made it further than Team Australia and so they at least walked away with a point. And up next was Team USA with Jesse Labreck. She’s known for falling at the last minute and surprisingly she held on this time.

Jesse was the only person to have completed the course in her heat. So, she gave Team USA two more points on the board and they’re in the lead with six points. Up next was Stage 2. The first place winner would receive three points, the second would receive two points, and the last would receive one point. Team USA went first with Daniel Gil. Gil is a veteran and he’s recently come off of his best season yet on ANW. He nearly fell on the first obstacle but held on strong and he completed Stage 2 with great timing.

Team Europe went next. Anton Fomenko hails from Russia and not only did he do great on his season, but he’s also traveled and he’s been working with the American ninjas. It was because he was so well traveled that everyone assumed he would do great and unfortunately he went out on the second obstacle. Team Europe was once again in the last position when Team Australia went next and moved past that obstacle. Their Daniel Mason didn’t complete the course and so he walked away with two points and Team USA continued to stay in the lead.

Next up was Team Australia. In their second heat of Stage 2, it was Bryson Klein representing them and he at least seems to understand that Australia needed points on the board. He raced through the course and he finished with one of the fastest times for this stage. Next was Team Europe with Damir Okanovic from Bosnia. He was born there, but he grew up in the states because the civil war there had pushed his family out and so he was representing his place of birth because he wanted to be known for more than what happened. And unfortunately, he didn’t get to finish the course.

He did make it very far and so it all depends on Team USA to see where he landed in his heat. Team USA was being represented by Karsten Williams. He was known as the Big Cat because he really was very tall. But in his rush to be very fast, he fell and he became the first fall for Team USA. The USA was still in the lead with eleven points, Australia was in second with seven points, and Europe was in the bottom with three points. And so Team Europe tried to stage a comeback with Stage 3.

They had Magnus Midtbo. He was from Norway and he does a lot of videos on YouTube in which people tell him he should be on Ninja Warrior and so that’s where he got the idea. He joined up because of those videos and he made it really far before he fell. The fall came out of nowhere, but his chances at the points now rested on Team USA. Drew Drechscel was representing the Americans and he was basically unbeatable. He sped through the course and he injured himself yet he kept going.

Drew finished strongly and so Team USA remained in the lead. They were followed by Team Australia in second and Team Europe in third, but with Drew’s injury, he couldn’t compete on Stage 4 and his place was given to Adam Rayl. Rayl went against Bryson Klein in the final climb of eighty feet.

And this time it went to Team Australia. Bryson has been practicing at home and it showed when he won the climb.

It was the USA vs the World and this time the World won!