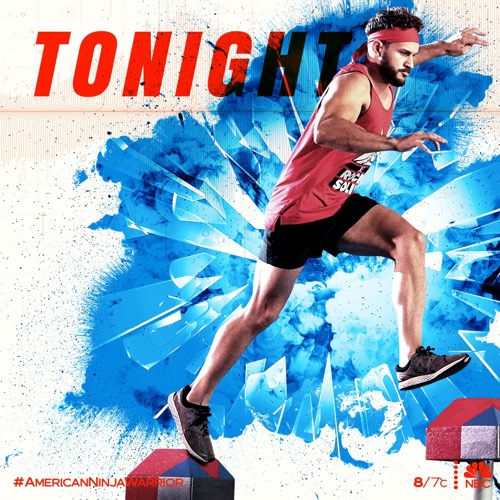 Tonight on NBC their obstacle course competition American Ninja Warrior returns with an all-new Monday, September 21, 2020, episode and we have your American Ninja Warrior recap below! On tonight’s American Ninja Warrior season 12 episode 3 as per the NBC synopsis, In this second third round of Qualifying, the ninjas face up to six challenging obstacles including the high-flying Beehive, which is new to the course this year, in addition to fan favorites the Shrinking Steps and the iconic Warped Wall.”

Things were different this year. They still have City Qualifiers where ninjas all across America came together to compete in a six-obstacle race and whoever makes it the farthest the fastest gets to go on to the next round. They get to go to the City Finals. The change, therefore, is the location. ANW usually zigzagged across America and so they had to change that because of the pandemic. The show now stays in one place. They’re staying in St. Louis for the rest of the season and the ninjas all have to come to them. And there were other big changes, one of them is that they no longer have a crowded audience there to cheer on their ninjas.

Those crowds were slimmed down to competitors. Only competitors were allowed to be there in person and that brought about the last change. The competitors were teams now. There were teams of threes from the same area and it was up to them to represent their locations. The first team-up had Bootie Cothran. He was the first ninja to have his run tonight and it ended in a shocking upset when he fell on the second obstacle. Bootie is now out. He’s been having a field day during this pandemic because he’s been farming the lumber on his property that he has been cutting down and selling to toilet paper companies. And so he was still making it rich without the ANW crown.

There were still two members of his team that were up. The next one to go was Devin Harrelson. He was a familiar face on ANW and he had his best season last year. Unfortunately, right after his season, Devin returned home to find his Ninja gym and his tattoo parlor trashed. It seems someone had vandalized it in his long absence and it wasn’t covered by his insurance. Devin ended up relying on his community to get through the tragedy. He was able to rebuild and he was back now to try his hand at the crown, but he too fell unexpectedly on the course. He didn’t make it to the buzzer and neither did several ninjas who went on after him.

Whitney Sigler was apart of a new parents group consisting of ninjas. They all had their run and none of them made it to the buzzer. The next ninja was Sem Garay. He was a muscled dude and it was still surprising for him to be lifting his own body weight on mere fingers. Many thought he would be the first finisher. He sadly was not a finisher. He made it past the new obstacle called the Honey Comb and he was on the fifth obstacle when his heavyweight became too much for his upper body strength. He ended up falling. He missed out on the buzzer this year and he like the others have to wait and see how many finishers there were in terms of them going to the next round.

A trio Texans had their run over the commercial break. Thomas Stillings was the last of them and he was a newlywed. He married his girlfriend and it happened around the time she almost died from a brain tumor. Thankfully, she’s doing better nowadays. She was cheering on Thomas from home and it was that in mind that Thomas became the first actual finisher. He got that buzzer. His timing is now the one to beat for the Power Tower. There were more ninjas. There were a couple of them from the South West that tried to make it to the buzzer and they all failed. Each member of that team was knocked out by one obstacle or another.

Then came Michelle’s team. Michelle Warnky Burma was one of the leading female ninjas on the circuit and she operated her own gym in Ohio. She brought with her two of her proteges. The first one was Kyle Wheeler. He walked into her gym as an overweight kid and he’s really slimmed down. He managed to impress Michelle with his dedication and so she brought him along this year because she thought he was a serious contender. Kyle later did her proud by starting out strong and it was the new obstacle the Honey Comb that knocked him out. Kyle fell into the water and he ruined the head buds he had been wearing.

Up next was another rookie. Tage Herrington came with Adam Rayl and he was just nineteen. He looked younger than his age. He still looked like he could be in his early teens and he was nicknamed Baby Boy Blue or Blue for short. Blue started strong. He spent a long time on one of the obstacles and so many began fearing for him. They thought he would fall. They turned out to be wrong and Blue sailed through the rest of the course. He even played around on the fifth obstacle by changing up his maneuvers. And it all led to a very proud moment in which Blue became the second finisher of the night.

Tage is one of twelve children. He was asked which was harder – getting food at breakfast or doing this and he said breakfast. Next up was Brandon Mears. He was a firefighter along with his best friend coined the term Power Tower and he has once again taken out by a balance obstacle. Polizzi went after him. He was the second half of the original Power Tower and he went where his friend didn’t. He became a finisher. He was the third finisher of the night and he was the first to at least try for the extra ten grand by going after the Mega Warped Wall. He failed to make it up there. He tried the Minor Wall and that’s where he hit his first buzzer of the season.

Najee Richardson went next. He was called the Phoenix because he often looked like he was flying through the course and he really needed a buzzer tonight after suffering a poor season last year. Najee was ready to redeem himself. He speeds through most of the course except for the balance obstacle which he knew he needed to be somewhat afraid of. It took him out not that long ago. Najee took his time with the trickier obstacles and it paid off. He made to the sixth obstacle where he too tried to get that extra ten grand. He ran up the Major Warped Wall and he just barely missed it. He still made it up the Minor Wall and that was a victory on its own because he didn’t hit a single buzzer last year.

Elizabeth Leslie had her run. She too fell victim to the second obstacle otherwise known as the Lunatic Ledges and she wasn’t alone. There were about ten others that fell on that obstacle. They just couldn’t make it past the ledges. Michelle’s two pupils were knocked out of the competition and so it was up to her to make Ohio proud. She had an amazing season last year and she also got married. Michelle is looking to start a family with her new husband and so she might take a break for ANW as she pursued that. Only she too fell prey to the second obstacle. She waited too long to come off of it and she suffered because of it. Michelle will be lucky to make it to the next round because of her performance tonight.

Someone who knows a little about upsets was Adam Rayl. He took a surprise fall last season during the Qualifiers and he was ready now to move past it. Adam wanted the Power Tower. He raced through the course and he was putting speed above everything else. Which cost him. Adam fell on the fifth obstacle. He tried repeating a hand maneuver that his protégé Blue had gotten down and it failed to work this time. Adam fell on the fifth obstacle and he now has to wait and see how many finishers stand in the way between him and the City Finals. And so it must not have helped that the next ninja proved to be the Papal Ninja Sean Bryan.

Sean brought with him other members of the church including a priest. The priest didn’t make it far, but Sean finished the course with the fastest time and his shoulder wasn’t it at his best. He’s had several surgeries on that shoulder. He injured it on the course a while back and so tonight meant the Papal Ninja was back at his best and there were more veteran ninjas that went next after him. There were ninjas like David Campbell. He was known as the Godfather because he’s been on every season of ANW and he says his secret is his day job as a pizza delivery man. He said it gives him time to train.

The training even showed. David lost momentum on the Lunatic Ledges and so he climbed up higher and jumped off. His gambit worked because he didn’t fall into the water. He made it to the platform and he just kept going. David became a finisher. He went after the Mega Warped Wall and he was the first person of the night to get it. He got the extra ten grand at age forty-three. David sacrificed the fastest time for the Mega Warped Wall and that was the better deal. Next up was Jessie Graff. She was a great ninja and she was just coming off the Titan Games where she was chosen by Dwayne “the Rock” Johnson.

Jessie was also coming back from the new Wonder Woman film. She was a great competitor and her work as a stuntwoman kept her fit. Jessie easily went through most of the course. She had some slight trouble on the balance obstacle and it was only because she knows how to fall that she was able to maintain standing. Jessie then continued on until she made it to the Warped Wall. From there, Jessie was able to become a finisher and she was the first woman tonight to do so. Tonight had a slew, legendary ninjas. Ben Melick even came back as the Tarzan and he retired the loincloth. He said he just wanted to run tonight as Ben.

Ben made it to the fifth obstacle where he fell after getting his arms crisscrossed. Then there was RJ Roman who’s made it to the Nationals with both years he competed in the competition and tonight was another great night for him. He made it to the Warped Wall with the second-fastest time. This means it would be him against the Papal Ninja. They competed against each other in the Power Tower. They raced through the course because they both wanted to bring back their teams with a redemption. And so it was the speed demon against the speed angel.

And the speed demon won, congratulations to RJ Roman.