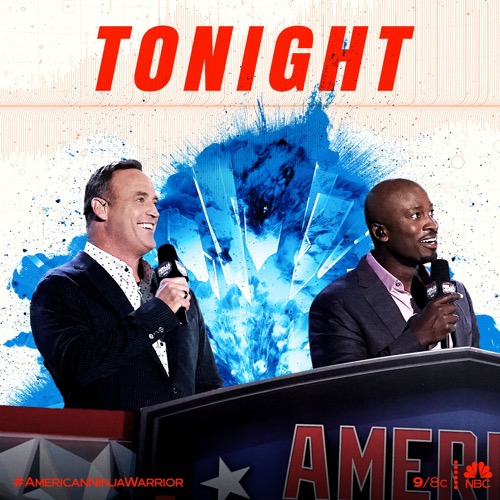 Tonight is important! It was the fourth and final night of Qualifying. Qualifiers usually happened in several cities all across America, but ANW is different this year because of the pandemic and one of the changes that had to happen was that Qualifying was going to be cut down to four nights. It also wasn’t happening all around America. It was going to be happening all in one place and the ninjas came to them. The ninjas were some known faces were invited back this year. They also came with two ninjas that they nominated and up first was Brian Krestch’s team. He brought with him, Brandon White.

White was the first to have his run. He made across the new obstacle called the Beehive which took out several prominent members of ANW and he fell on the Spinning Bridge. The balance obstacle was something that needed to be tackled with speed. Which was something White didn’t do. White tried to take his time on the obstacle and he stumbled on the third piece. If it hadn’t been for that, he would have made it further. Next up was another member of Krestch’s team. It was Vance Harris. He too was a rookie like White and he learned from his team member’s mistakes. He made it across the Spinning Bridge. He got to the fifth and newest obstacle. The Sideways.

Brian took a few extra swings there. He had to make it over a wall and so it was perfect practice for the Warped Wall. Brian took on the Warped Wall like it was nothing. He was only the second competitor and he became the first finisher. There were several people that went on after him during the commercial break. None of them stood out and the first competitor who went after the show returned was Kat Henschen. She was a dog groomer who was nominated this year by the Cowboy Ninja. The one and only Lance Pekus. Pekus and Kat bonded over MS. Pekus’s wife has the disease and Kat was a great person to talk to because she knew the disease well.

Kat was the first woman to have her run. She was also a grandma and grandma almost fell on the first obstacle. She only barely held on. She went on to the second obstacle and that’s where she again tripped up. Kat fell on the second obstacle. There is a risk she might not make it to the Finals and it all depends on how the rest of the women do. Next up was Gary Brown. He was nominated by Karsten Willian otherwise known as the Big Cat and he was a Major League Baseball player. He was therefore athlete. He knew what it was to train and he was doing really well on the course until he went against Sideways.

Gary swung and he missed on that obstacle. He may have fallen, but he did reach the fifth obstacle and in good timing. There was a big chance he might still go to the Finals. Next up was Katie Lanza. She was nominated by Tiana Webberley. The two women met as Tiana was helping her mom who was sick and Katie was helping her son. They bonded over their shared experience and now Sweet T has brought Katie with her to ANW. Katie started the course struggling. She almost fell on the first obstacle and just as she moved past it she fell on the second one. Only Katie wasn’t disheartened. She was so proud to be there that she told ANW “thank you”.

Next up was Sweet T herself. This was her sixth season competing and she’s never hit a buzzer. Everyone was hoping that this will be her year. Tiana started out strong and she has no problem on the Beehive. She did however almost fell on the balance obstacle. She managed to pull herself up and the rest was easy. Sweet T made it to her first Warped Wall which she managed to overcome on her first try. It was her first buzzer and she was just so happy that everyone cheered her on. Tiana would later say that tonight meant the world to her.

Amir Malik went next. He was nominated by David Wright otherwise known as the Cake Ninja and it turns out Amir also loves cake. He’s a baker. He makes all the cake he’ll ever need and these two along with their third member were on a sugar high. Amir Malik is a name everyone is going to remember after tonight. He raced through the course and he finished with the fastest time. He also went on to break the buzzer. Amir got a little wrapped up in pressing and so he ultimately broke it. Thankfully, ANW had people to fix it. They brought someone out to do so and it was ready for the next one.

Brian Kretsch was the next finisher. He had his run over the commercial break and he was great. Karsten had his run when the show came back. The Big Cat himself said he was in better shape than last year. Last year, he had his best season ever and so he was hoping to top it tonight. Karsten came out fast and it was clear that he was wanting the fastest time. He wanted it so badly that he made several mistakes. He ended up falling on Sideways and unfortunately, by then he knew it would be tough for him to make it to the Finals. Tonight has been a really great night for finishers. With the way things were turning out, there was going to be a long line of them and so that made it tough for people who fell.

Lance Pekus was another finisher. Kevin Bull was another finisher. The veterans were doing really well tonight. Mady Howard was no longer a rookie anymore after her breakout season last year and she decided to come back this year in spite of being needed on the frontlines as n essential worker. Mady was a great ninja. She started out strong and she almost slipped on the balance obstacle. It was by sheer luck that she held on as she did. She was able to move past that obstacle and she made it to the Warped Wall. She was the second woman to do so and she was the second woman to become a finisher tonight. Its been a great sophomore year for her.

Alex Carson was apart of the Cake Ninja team. He was a baker as well and he bakes cheesecakes. He became a finisher. David Wright who nominated him also had his run over the commercial break and he became a finisher too. It turns out cake is the secret ingredient to the ANW obstacle course. Next up was Kyle Schulze. He made it clear that if he was given to be given a nickname then he wanted to be as the Deaf Ninja. Kyle had been nominated by Michael Torres who wanted to show the world that disability didn’t have to keep them from the course and Kyle was a great example of doing so.

Kyle had a strong run. He stumbled on the balancing act and he ended up injuring his hand. It was this injury that cost him the buzzer. He fell on Sideways because his hand hadn’t been able to support his weight. After Kyle, there was Verdale Benson. Benson got his first buzzer tonight and he even broke into tears once he made his accomplishment. Tonight seemed to be the night for surprises. Will Schlageter went next. He was a familiar face because he first tried to come on the show when he was fourteen and his dad ended up doing the run for him. His father never made it past the first obstacle, but Will hoped to do so and it was unfortunate when he fell on the Beehive.

Jimmy Choi went next. He was back for the fourth time as a member of Michael Torres’s team and he was also battling Parkinson. Choi partakes in an experimental regimen. It helps him keep his condition under control and everyone was rooting for him when he took a bad fall on the first obstacle. It was unexpected. No one saw that coming and Jimmy’s team members were there supporting him when he needed them the most. They told him he can always come back if Michael won the Power Tower. It turns out one of the powers from the Power Tower is that someone can bring their team members with them into the Finals.

Michael Torres soon had his run. He raced through the course in hopes of getting that Power Tower and he finished with the fastest time so far. The first thing Michael did after he pressed that buzzer was shouted down to Jimmy that he was bringing him back. Next up was Meagan Martin. She was a seven-time veteran and she had an easy time of it at first. She made it past the first few obstacles with no problem and not even the balance obstacle was able to trip her up. Meagan was shooting for that buzzer. Her training as a pole vaulter and rock climber came to her aide tonight as she made it all the way to the fifth obstacle. And that’s where she fell.

Meagan had tried grabbing the obstacle with one hand which was a big no-no. She needed both hands to keep her balance and so she fell because of a simple mistake. Luckily for her, she made it far rather fast and so she’s still going to the finals. Kid Owhadi also had his run tonight. He again went for the Mega Warped Wall and he again missed it by a few inches. Kid ended up finishing with the third-fastest time because he went after the Mega. And so everything came to depend on Joe Moravsky otherwise known as the Weather Man. Joe needed to defeat the second-fastest time in order to qualify for the Power Tower.

Not only did Joe get the second fastest time tonight, but he also went after the Mega Warped Wall and he overcame it. He won the extra ten thousand dollars. All there was left was for him to go up against Michael Torres in the Power Tower.

Both men needed the win in order to save their team members and yet it was Joe who won.

Joe Moravsky gets to bring back his team.