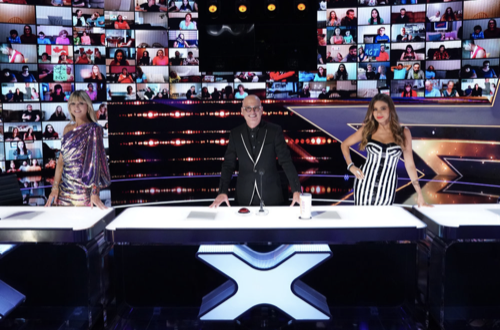 Tonight on NBC America’s Got Talent begins with an all-new Wednesday, September 23, 2020, episode and we have your America’s Got Talent recap below! On tonight’s AGT season 15 episode 24 “Live Finale Results – Winner Announced″, as per the NBC synopsis, “Host Terry Crews reveals who America has chosen as the $1 million winner of “America’s Got Talent” season 15. The two-hour finale will feature special guest performers and not-to-be-missed surprises.”

Usher opens up the finale with a dance routine that includes judges; Howie Mandel, Heidi Klum, and Sofia Vergara. Tonight one-act will win one million dollars and become the new AGT champion. Last night all of the finalists had one last performance to change their lives beyond their wildest dreams. We get a recap of last night’s unforgettable acts; Brandon Leake, Roberta Battaglia, Christina Rae, Broken Roots, Alan Silva, Kenadi Dodds, Archie Williams, BAD Salsa, Bello Sisters, and Daneliya Tuleshova.

Ryan Tedder from One Republic performs with Christina Rae for a duet of his band’s song, “Lose Somebody.” Heidi loved it and called it a treat, she says it makes her so happy to see Christina do what she sees best.

The ten finalists joined together for a special performance of a Bill Withers classic, and they delivered. Bill past away last month, but his lyrics are just as inspiring as they ever were. They sing, “Lean on Me.”

Back in 2016, a terrifying danger act appeared on AGT, Deadly Games. Danger must run in their family because this year Alfredo from Deadly Games has a brother in this year’s competition, Alan Silva. For this finale, they have put Alan with another incredible act, The Bello sisters. They are performing with a sensational singer who’s had over 3 billion global streams and sold over 1 million albums, with her hit songs, “River” and “Higher.”

Archie Williams made God a promise that if he made it to the finals he would sing his favorite song by his favorite gospel artist. Archie sings that song with the singer, Pastor Marvin Winans. Archie tells Marvin that he helped keep him going in prison, every song that he ever song changed his own life. Pastor Marvin Winans and Archie sing, “Everything You Touch Is a Song.” After his performance, Terry shows a video message from Meghan, Duchess of Sussex, saying that they are huge fans and very proud of Archie.

Last season, a choir that gives disadvantaged kids an opportunity to enjoy the spirit of music came on AGT and finished second. Terry was so blown away with Detroit Youth Choir that he hit the golden buzzer. Since then, the city gave them one million dollars and the key to the city. They have been on talk shows and performed in many places. Tonight they perform “Believer,” by Imagine Dragons.

Broken Roots perform with their idol, Blake Shelton when they sing, “God’s Country,” together.

Terry announces that Kia is giving the winner and the runner-up brand new cars.

Last season we had a sensational dance crew from India who made it to the top five and then went on to win AGT Champions. This year, an act from India made in the top ten. Together, performing acrobats and dance on stage are BAD Salsa and V.Unbeatable.

Roberta Battaglia and Kenadi Dodds perform together with Julia Michaels and JP Saxe with their new song, “If the World Was Ending.” Roberta and Kenadi show how powerful both their voices are.

It is about to get intense, the top ten return to the stage. After months of auditions, performances, votes, and results, we are going to find out which acts are closer to winning their AGT dream by announcing the top 5.

Alan Silva and the Bello Sisters are up, the act taking the first spot in the top five is Alan Silva. Christina Rae, Heidi’s golden buzzer, and Daneliya Tuleshova are up. The act taking the second spot in the top five is Christina Rae. BAD Salsa and Broken Roots are up next, the act making it through is Broken Roots. Kenadi Dodds and Roberta Battaglia are up, Roberta makes it to the top 5. Archie Williams and Howie’s golden buzzer, Brandon Leakes, are up last, Brandon Leakes has made it through.

We are about to find out who finished in fifth place and is leaving the competition: Alan Silva.

The act finishing in fourth place and leaving the competition is: Roberta Battaglia.

The act in third place and also leaving the competition is: Christina Rae.

It comes down to two acts: Broken Roots and Brandon Leakes. Both are going home with a new Kia, it is just down to who has won the title of AGT winner.

America has voted, the winner of one million dollars and the star and headliner in Vegas is: