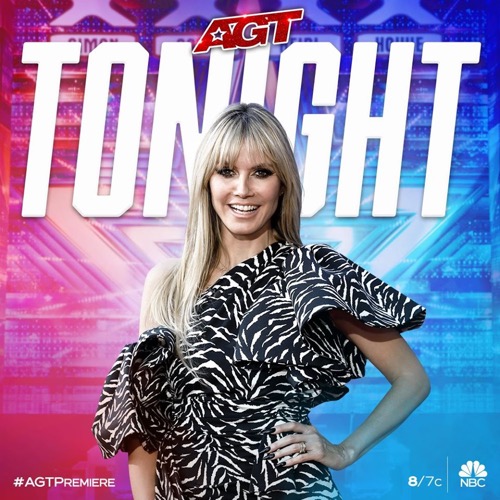 In the season premiere, variety acts of all types and contestants of all ages audition for the chance to win the $1 million prize. The Golden Buzzer is back giving five lucky acts over the auditions the chance to go directly to the live shows to compete for America’s vote.”

This year we welcome Modern Family’s Sofia Vergara with judges Howie Mandel, Heidi Klum, and Simon Cowell. And, Terry Crews is back as AGT host.

The first act is Les and Nina with their pet pigs and hogs and wants to be the first performing pig act on the Las Vegas strip.

Judges Comments: Sofia: “for me it was super fun and I want to see more.” Howie: “They seem to be incredibly cared for and they are doing tricks that we only see dogs do.” Heidi: “I thought it was adorable, I’ve never seen a pig that big before and I want to go up and kiss him because someone told her that kissing a pig brings you good look – and she does.” Simon: “On all my years on this show, this is a first.”

Bad Salsa is made up of Sonali Sumanth who won India’s Got Talent 4 and Sardar Puja who was a semi-finalist in season 6 and 7. Both grew up poor in India. Their salsa dance style is fast and filled with a lot of tricks. A standing ovation from the judges.

Judges Comments: Heidi: “That was amazing. I love you guys too, there were so many moves that I truly have never seen.” Howie: “You are the opposite of bad. You are surprising, energetic, and fast, I loved it.” Sofia: “This was exciting, I wanted to dance, but then I was scared and couldn’t take my eyes off you. You are wonderful together.” Simon: “It was like a movie that you fast-forward, there were so many moves and so fast, fantastic. Thank you for flying here and being on our show.”

Eileen chase comes out in a whoopie cushion costume and gets four X votes very fast.

Joey Kar and Austin Edwards are Broken Roots from Chicago, IL. Austin is a homicide detective, Zoe was in the police force but is now opening up a music school for children. They met six months ago and this will be the first time they play together.

Judges Comments: Howie: “Thank you both for your service in law enforcement. I cannot believe that this is the first time that you both come on stage together because it seems like decades, I commend you for that.” Heidi: “I really loved you guys, I love the tone of your voices, I loved that this is a recent bromance between the two of you and that wasn’t too shabby for your first try.” Sofia: “That was beautiful, I loved how you were emotional, to me it was perfect.” Simon: “Your friendship is what this show is all about.”

Malik Dope Drummer and he will be showing the judges a way that has never seen someone drumming before. He drums on the streets now in Washington, DC. Malik throws his entire being into his performance, there’s some rapping, moonwalking,
dancing and drumming.

Judges Comments: Howie: “You are a dancer, a drummer, and an entertainer. This is the kind of show that I would go see and what we are all about. That was dope!” Sofia: “I couldn’t think, I wanted to get up and dance, I loved it.” Simon: “We haven’t had an act like this before, anyone close to being as good as you. My six-year-old son just bought a drum kit, and when he sees this show, I am going to hear it for the next six months. I think you are super, super talented.”

Ryan Tricks works for the sewage department. He does magic and wants to show his son that when you have a dream you can do anything. He is going to test Howie and Simon’s subconscious connection, live on stage. There are two decks of cards, Simon chooses the blue deck. Ryan gives the red deck to Howie. They both choose a card, on the count of three they show the audience, it is a perfect match. Howie puts on a blindfold and Ryan does another trick where he touches Simon’s hand and Howie feels it. Then Howie imagines a cookie and there is one in Simon’s hand. That was incredible.

Judges Comments: Sofia: “That was incredible, since the moment you started speaking I knew you were going to entertain us with something really good.” Heidi: “I loved it, the magic was really good, you did fantastically.” Simon: “There is something about you that I really like and I sort of like Howie a little more after that.”

Archie Williams is from Louisiana, he was incarcerated from 37 years for someone else’s crime, DNA cleared him. He went to prison, but he never let his mind go to prison. He would pray and sing to get through the bad times. He is still trying to digest the feeling of being free. In prison he visualized himself on America’s Got Talent and now he is there, this is his chance of a lifetime. Archie is going to singing, “Don’t Let The Sun Go Down On Me.”

Judges Comments: Heidi: “I don’t cry for a lot of things, but that did it for me. I felt you and thinking about your life, it was very powerful.” Howie: “Thirty-seven years, I can’t imagine, they took a life away from you. But here, you are getting the love.” Sofia: “Thirty-seven years that they didn’t break you. Now you are here, and we love you.” Simon: “I will never listen to that song again with the same meaning, you are a courageous man with a great voice. I will never forget this audition for the rest of my life.”

Dan Nowman is singing an original song called, “Funky Space.” He turns around, puts on an alien mask and jumps all around the stage. Three X votes get him off the stage.

Next is the Old School Skaters, they are looking to travel and to teach, they want people to know that roller skating still exists. They dance to “I Will Survive.” Four X votes get them sent home.

Michael is from Munster, Indiana sits on a chair, and pulls out two sock puppets and only lasts a minute, when he fakes throwing up, the X votes begin.

Judges Comments: Sofia: “I think you guys were amazing. I love seeing to Latina girls having fun on stage, it was fun and full of energy.” Heidi: “I found you guys super entertaining, and you have the pipes to back it up, you can sing.” “Howie: “You guys are campy and funny, you made people smile.” Simon: “You came on and got a standing ovation, I love your reaction as much as I loved the performance.”

Simon goes backstage and tells the girls that they broke the curse.

Vincent Marcus is from El Paso, Texas and he does impressions. His dad was a police officer and his mother a teacher. He is on Vine, has a good following that built up for the past six years. Although, he has never done this live.

Judges Comments: Heidi: “Isn’t it nice to get actual feedback than likes? You did fantastically.” Sofia: “It was a joy to see you, you picked great recognizable voices. I loved it.” Howie: “As somebody who does stand up comedy, I am addicted to live response and I think you will be too. You are an amazing live performer.” Simon: “I think you have real star quality, I love your story.”

Moses is from Spain and he is a contortionist that uses fire! This was weird. He takes a knife and puts in his nose, he asks Heidi to take it out, no way. Terry says don’t try this at home. Next, there are EMTs waiting as he puts his mouth over a blade, then a cement block on his head and Terry takes a hammer and wacks him on the head. Seriously! He is ok, whew.

Judges Comments: Sofia: “Does your mother know that you do this?” Heidi: “That was scary, your crotch was on fire.” Simon: “It was everything, you set yourself on fire, you almost had your head chopped off, God knows what you would do next.” Howie: “It was so insane.”

Voices of Our City Choir, started four years for homeless people in San Diego. They can’t afford medicine, they can’t afford help, with the money they have raised, they were able to get some people off the street.

Judges Comments: Sofia: “That was beautiful, the words of the song were really special, so perfect for you guys, we need more people like you who take matters in their own hands.” Howie: “We need to solve the problem of homelessness, what you do has blown me and the audience away.” Heidi: “I feel the togetherness of all you guys and it moved me.” Simon: “There is no question that there is strength in numbers.”

Terry is so moved by this choir that he uses his golden buzzer.